Representing the U.S. Pavilion at the Venice Biennale

R+A’s year-long communications campaign began in May 2014, coinciding with the announcement of the selection of Joan Jonas and The MIT List Visual Arts Center to represent the U.S. at the 56th International Venice Biennale.

Over the summer of 2014, the R+A team held a series of meetings on MIT’s campus with the school’s major arts leaders, including Paul Ha, Director of the List and commissioner and co-curator of the U.S. Pavilion, to gather critical information about the List’s renowned work supporting artists at the vanguard of the field and presenting pioneering contemporary art exhibitions. Through this discovery phase, we developed core institutional messaging about the List, the Arts at MIT, and Joan Jonas’s work, which we incorporated into press kit materials and media outreach throughout the campaign—ensuring coverage of the Biennale accrued back to strengthen the profile and public awareness of the List and the Arts at MIT.

A key part of our campaign strategy was a media luncheon and briefing held in New York in October 2014, which brought together over 25 writers and editors from priority publications to hear MIT leadership and Joan Jonas speak about the project—providing important context for MIT's arts activities and laying the groundwork for informed, thoughtful coverage about the U.S. Pavilion in advance of the Vernissage.

Concurrent with and following this event, our team pursued preview, feature, news, and review coverage across top-priority international and U.S. outlets, which we identified and agreed upon in advance with Jonas and the List. With the project in development until very close to Vernissage, details about the exhibition were limited and media access to Jonas throughout this process was kept intentionally focused—permitting artist interviews with only a select number of high-profile outlets in support of extensive feature coverage.

R+A identified noteworthy project milestones throughout the year—such as the announcement of The Helen Frankenthaler Foundation’s support for the project, the plans for Jonas’s live performance at the Teatro Piccolo Arsenale, and the special mention of the U.S. Pavilion at the Golden Lion awards ceremony—and capitalized on these moments with strategic media outreach, resulting in additional coverage of the List and the U.S. Pavilion across priority outlets.

In weeks leading up to and during vernissage, R+A worked closely with national and international arts writers, editors and critics to ensure their presence at the U.S. Pavilion press preview and opening events in Venice—encouraging news and review coverage timed to the Pavilion’s public opening.

Concurrent with the media outreach and communications campaign, R+A oversaw all of the coordination and logistics for VIP tours of the U.S. Pavilion during vernissage and the early run of the Biennale and provided counsel to the List on the development, coordination and logistics surrounding special events in Venice.  Working with the team at the List, we identified priority institutions and individuals to receive a personal welcome and introduction to the exhibition and then coordinated directly with those institutions to arrange their visit to the U.S. Pavilion.

The campaign garnered more than 1.5 billion print and online media impressions, encompassing media from over 30 countries. Coverage ran in a wide array of publications, such as high-end lifestyle publications including W Magazine and Vogue; major opinion-leading dailies including The New York Times (which ran five stand-alone features on the project over the course of less than a year), The Wall Street Journal, The Guardian, Financial Times, CNN, Bloomberg, BBC, The Boston Globe, and The Huffington Post; popular outlets including The New Yorker, T Magazine: The New York Times Style Magazine, New York Magazine, and Whitewall; and art trades including Artforum, Art in America, The Art Newspaper, Artsy, and ARTnews.

More than 670 international media visited the U.S. Pavilion during the Vernissage, resulting in review coverage in national and international opinion-leading dailies and major art trades.

In concert with the List’s social media campaign for the project, a number of prominent media outlets, journalists, and art world figures shared their thoughts and experiences from the U.S. Pavilion across social media platforms. Notable posts included tweets and instagrams from publications such as The New York Times, The Wall Street Journal, Artforum, T Magazine, and W Magazine; and from journalists such as Roberta Smith, Randy Kennedy and Jason Farago. 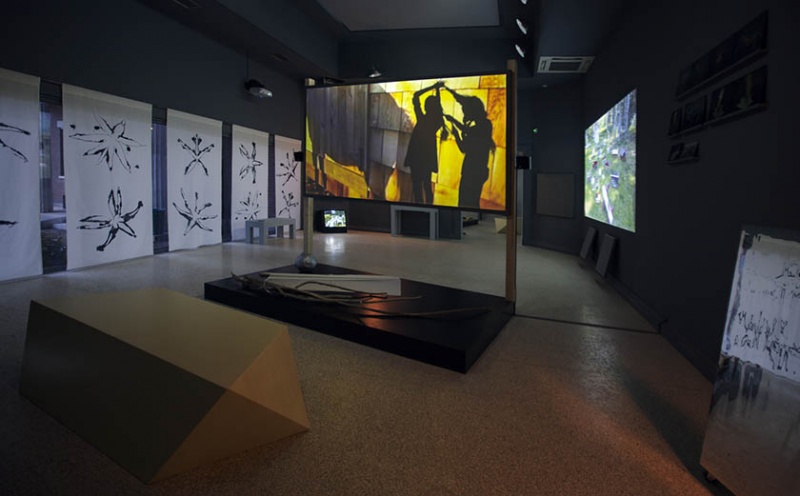