Exhibitions Investigate the Museum’s Thematic Question: “What Is America?”

The Addison Gallery of American Art on the campus of Phillips Academy in Andover, MA, today announced the museum’s fall 2020 exhibition program. While the Phillips Academy campus remains closed to the public, the museum will reopen its doors on Saturday, October 17 with limited hours and enhanced health and safety protocols. The new hours for public visits are 10 a.m. – 5 p.m. on Friday and Saturday, and 1 – 5 p.m. on Sunday. Detailed information about visiting and reserved ticketing is available on the Addison’s website, www.addisongallery.org.

The Addison is one of the oldest institutions dedicated to American art and has one of the most significant collections of American art in the world, providing unparalleled resources to both students and the public. The Addison’s fall programming will draw on the breadth and depth of the collection to explore the museum’s guiding question: What Is America?

The following exhibitions will be on view this fall.

In addition to the above exhibitions, fourteen photographs by Roy DeCarava chronicling everyday life in Harlem in the 1950s will be on view in the museum’s first floor Exhibition Hall.

“Posing the fundamental question—What is America?—has never been more vital than it is today,” said Allison Kemmerer, the interim director of the Addison Gallery of American Art, Mead Curator of Photography, and senior curator of contemporary art. “As a museum of American art, the Addison is in a unique position to tell stories that amplify multiple voices and diverse points of view with exhibitions that reevaluate the art historical canon and call into question underlying assumptions about the country and who we are as a nation. The Addison is thrilled to reopen its doors to the public and we very much look forward to welcoming everyone back to our museum.”

Further information on the Addison’s fall 2020 exhibitions follows below.

Wayfinding presents new work by six artists—Sonny Assu, Andrea Chung, Liz Collins, Spencer Finch, Josh T. Franco, and Heidi Whitman—made in response to a two-year engagement with Phillips Academy’s Sidney R. Knafel Map Collection. The collection, a unique holding of atlases, maps, and globes, documents European understanding of the world from 1434 through the 19th century and reveals the political and economic aspirations of this period.

Approaching the Knafel Collection from the vantage point of the 21st century and through a variety of cultural perspectives, intellectual interests, and aesthetic approaches, the six artists in this exhibition explore the ways in which American spaces have been imagined, claimed, measured, circumscribed, and contested in works that spark provocative dialogues between past and present.

Wayfinding is curated by Allison Kemmerer and Stephanie Sparling Williams, former assistant curator at the Addison and currently associate curator at Mount Holyoke College Art Museum. This exhibition is generously supported by the Sidney R. Knafel Fund, the Edward E. Elson Artist-in-Residence Fund, and a grant from the Artist’s Resource Trust.

First published in France in 1958 and in the United States in 1959—in the midst of the Cold War—Robert Frank’s The Americans is among the most influential photography books of the 20th century. The Addison is one of only four museums in the world to own a complete set of the images from this volume.

Frank’s dark and grainy images are the work of an outsider looking in and reveal his ambivalence toward his adopted country. The eighty-three carefully sequenced photographs that appeared in The Americans, edited down from more than twenty-seven thousand images, are raw documentation of a country in transition. They celebrate its strengths as an emerging superpower while exposing the cracks in the veneer of optimism and opportunity that defined its postwar culture. More than a revelation of a specific moment in American history, The Americans is a work of resonance that probes the defining and enduring dualities of American life and culture—hope and despair, affluence and want, freedom and limitation, community and isolation.

Robert Frank: The Americans is curated by Allison Kemmerer. Generous support for this exhibition has been provided by the Winton Family Exhibition Fund.

Drawn entirely from the permanent collection, this exhibition builds on the Addison’s legacy of overturning convention by deploying one of the most conventional modes of museum display: the chronological hang. Works by artists such as Ruth Asawa, Thomas Eakins, Winslow Homer, Edward Hopper, Georgia O’Keeffe, Jackson Pollock, John Singer Sargent, James McNeill Whistler, and Andrew Wyeth are placed in dialogue with paintings, photographs, works on paper, and sculptures by their lesser known contemporaries. Through an installation that deemphasizes hierarchies of medium, subject matter, and critical recognition, this exhibition offers a holistic and nuanced view of a formative century of creative expression in America, undermining the dominant understanding of art history in which white, male, bourgeois artists are preeminent.

Visitors are invited to consider alternative ways of looking at and defining American art across time, to look and think critically about why some artists are remembered and others are forgotten.

Currents/Crosscurrents is curated by Gordon Wilkins, Robert M. Walker Associate Curator of American Art. Generous support for this exhibition has been provided by the Bernard and Louise Palitz Exhibitions Fund.

Ronald Reagan’s landslide victory in the 1980 presidential election signaled a fundamental shift in American culture. Many of the major strides toward social justice—particularly within the realms of racial equity, feminism, and LGBT rights—accomplished in the 1960s and ’70s by activist movements were eroded during the Reagan Revolution.

Artists alienated by the dominant culture of late 20th-century America found themselves unwilling and unable to separate their art from their activism. Some, like Lorna Simpson, Mark Morrisroe, Glenn Ligon, and David Wojnarowicz, whose works are featured in the exhibition, leveraged their racial, gender, and sexual identities to create autobiographical—often confrontational—works that made visible both personal and collective experiences of marginalization. Other artists featured in the exhibition, including Jenny Holzer, Gran Fury, Robbie Conal, and the Guerrilla Girls, exploited popular media such as bus advertisements and broadsheets to widely disseminate their biting social critiques. In ways both overt and covert, these artists weaponized their artistic practices to hold a mirror up to the injustices of their time, to combat apathy and provoke change.

To Make Visible: Art and Activism, 1980­–2000 is curated by Gordon Wilkins. This exhibition is generously supported by the Mollie Bennett Lupe and Garland M. Lasater Exhibitions Fund.

With the purchase of a photograph by Margaret Bourke-White in 1934, the Addison became one of the first museums in the United States to actively collect photography. In the almost 90 years since, the museum has acquired over 9,000 photographs. The selections displayed in this exhibition highlight some key moments in the development of the medium and in American history from the 1860s to the 1960s. The imagery includes Civil War battlefields, the American West, turn-of-the-century and Depression-era living conditions, geometric abstractions, and Civil Rights protests. Though photographic technology evolved over the course of the century, photographs served throughout the period as powerful agents of social change and vehicles of self-expression.

An Incomplete History of Photography is curated by Tessa Hite, Curatorial Fellow. Generous support for this exhibition has been provided by the Winton Family Exhibition Fund. 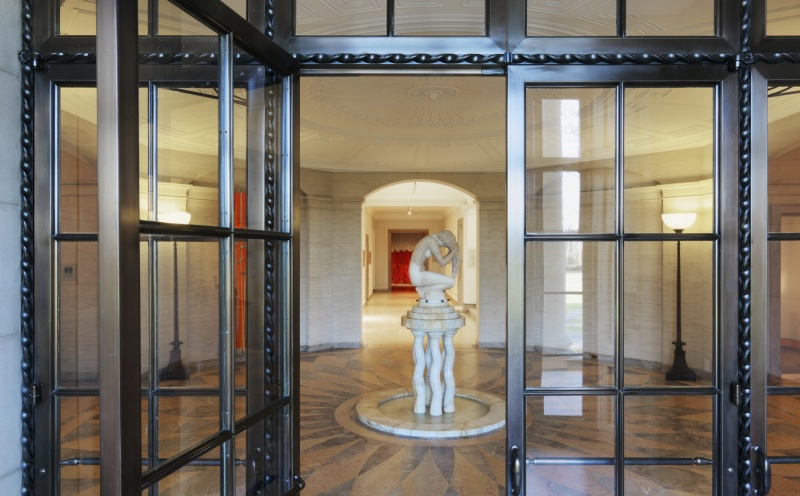