One of the first museums devoted solely to the art of the United States, the Addison Gallery of American Art has made prescient acquisitions and organized pioneering exhibitions over nine decades, and now holds one of the world’s most significant and dynamic collections of American art across media. In celebration of its 90th anniversary, the museum presents Learning to Look: The Addison at 90, an exhibition that features iconic masterworks, exceptional but lesser-known pieces, and new acquisitions that embody the Addison’s illustrious history and ongoing commitment to groundbreaking artists. With an installation that allows objects to speak across time and media, this exhibition playfully and provocatively juxtaposes works by artists such as Jacob Lawrence, Winslow Homer, Jay DeFeo, Martin Puryear, Georgia O’Keeffe, Thomas Eakins, Agnes Martin, Edward Hopper, Laurie Simmons, Martin Wong, Jackson Pollock, and Donald Judd, among many others.

“From our path-breaking commitment to collecting and presenting photography since the 1930s, to organizing the first ever full-scale retrospective of an Abstract Expressionist with Hans Hofmann: Painter and Teacher, to being the first museum to exhibit work by artists such as Ruth Asawa, Andy Warhol, and Francesca Woodman, the Addison has been in the vanguard of the exploration of American art,” said Allison Kemmerer, the interim director of the Addison Gallery of American Art, Mead Curator of Photography, and senior curator of contemporary art. “This adventurous spirit of collecting, exhibiting, and using art as a lens through which to examine the ever-evolving American narrative is the driving force behind our anniversary celebration and the Learning to Look exhibition.”

In addition to the well-known paintings that comprise the core of the Addison’s original collection, many of the works in the exhibition reflect the museum’s longstanding commitment to fostering and championing the work of living artists. For years, the Addison has consistently exhibited, acquired, and commissioned the art of its time with a singular boldness and daring. Early acquisitions of photographs by Margaret Bourke-White and Berenice Abbott underscore that the Addison was one of the first museums to seriously collect photography as a fine art, while important paintings by Josef Albers, John Sloan, and Hans Hofmann testify to the museum’s central role in giving these artists their first American museum exposure and/or retrospectives.

Works by artists including Jennifer Bartlett, Dawoud Bey, Wendy Ewald, Robert Frank, Frank Stella, George Tooker, and William Wegman, celebrate the Addison’s pioneering Edward E. Elson Artist-in-Residence program—one of the first of its kind in the United States—which has brought numerous emerging and established artists to campus since 1946, when Charles Sheeler was the inaugural artist-in-residence. New acquisitions by artists such as Lynda Benglis, McArthur Binion, Andres Serrano, Jaune Quick-to-See Smith, and Carrie Mae Weems build on the Addison’s legacy of championing some of the most innovative and important voices in contemporary American art and its commitment to presenting an expansive and nuanced story of the American experience.

In further exploration of the themes presented in the exhibition, the Addison has organized a slate of virtual programs, as well as a limited-series podcast, Look with Your Ears: The Addison at 90, presented by Tamar Avishai, host of the award-winning podcast The Lonely Palette. Find more information at www.addisongallery.org.

Generous support for Learning to Look: The Addison at 90 has been provided by the Anna-Maria and Stephen Kellen Foundation, Andrew and Barbara Gundlach P’22 and ’24, Edwin ’49 and Margaret Smith, William & Elizabeth Kahane P’20, and Harry Kahane ‘20.

Concurrently with Learning to Look, the Addison is presenting Mel Kendrick: Seeing Things in Things, the seminal artist’s first retrospective. The exhibition features more than sixty sculptures—including two outdoor installations commissioned by the Addison—alongside sculptural “sketches,” prints, and photographs spanning the artist’s decades-long career and tracing the evolution of his practice. The retrospective documents Kendrick’s sustained and inventive exploration of process, medium, material, and meaning. Guided by the essential properties of wood, rubber, and concrete, Kendrick invites viewers to meditate on the relationships between representation and abstraction, sculpture and body, organic and synthetic, and natural and manmade. 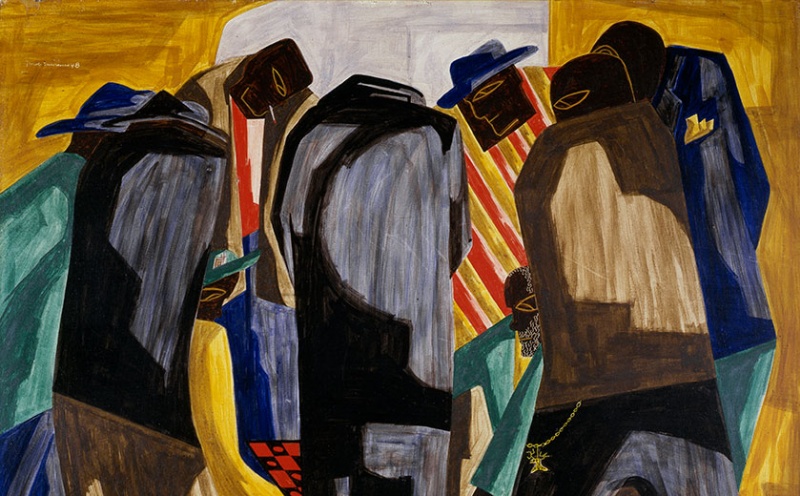 Jacob Lawrence, Kibitzers. 1948. Egg tempera on Masonite, 20 x 24 in. Gift from the Childe Hassam Fund of the American Academy of Arts and Letters, 1951.3