Highlights Include Inaugural Country-Focused Season on Ethiopia, Plans for New David Adjaye-Designed Campus, and Webinar Series on Africa and COVID-19

The Africa Institute in Sharjah, United Arab Emirates, the first center of its kind fully dedicated to the advanced study, research, and documentation of Africa and the African diaspora in the Arab world, today released its 2020 year in review, a report highlighting The Institute’s achievements and programming over the past year. In addition to announcing its plans for a new campus designed by world-renowned architect Sir David Adjaye, The Institute presented a wide range of academic, cultural, and artistic programming, including a scholarly conference on Ethiopia, a collaborative exhibition on Ethiopian artist Aïda Muluneh, a webinar series about Africa and COVID-19, and film screenings and talks by and about significant African filmmakers. As a result of COVID-19, The Institute transitioned a majority of its programming online and presented virtual events across its digital channels, many of which can be now viewed on The Institute’s YouTube channel.

“We are incredibly proud to have presented a beautiful tapestry of programming throughout 2020 that expands on our mission to make the latest ideas in African and African diaspora studies available not just to the scholarly community but also to the wider public in Sharjah and around the world,” said Director Salah M. Hassan. “We have an exciting array of programs planned for 2021 and we look forward to bringing people together—whether virtually or in-person—to join in our explorations and work.”

Each year, The Institute organizes and presents a range of programming that welcomes audiences from around the world and within the Sharjah community to engage with African and African diaspora culture, ideas, issues, history, and scholarship. These programs include international conferences and symposia, lectures, exhibitions, film screenings, and performances presented in Africa Hall, which currently serves as the home of The Institute, and venues throughout the city.

More information on The Institute’s 2020 year in review can be found below.

In Fall 2020, The Institute announced its commissioning of Adjaye Associates to design its new campus in downtown Sharjah, the development of which will allow The Institute to significantly expand its offerings and programming.

The design, developed by David Adjaye in collaboration with The Institute’s leadership, will create an enclosed campus with five wings of between four and seven stories each, connected by a series of open-air interior courtyards (sahns) that span the entire ground floor and feature fountains and landscaping with native plants. The 31,882-square-meter (343,175-square-foot) campus will include spaces of differing character and scale for classes and seminars as well as a research library and climatized archive facility, flexible auditorium and performance space, an exhibition gallery, a restaurant and café, and a bookstore. Entryways on each of its four façades will welcome the public and connect The Institute with surrounding institutions, organizations, and public walkways. The full design will be unveiled at a future date, following a two-year collaboration on the development of a design that advances The Institute’s multifaceted mission.

Each academic year, The Africa Institute commissions a group of leading scholars to organize a season of programming that centers on an African country or one of the worldwide African diaspora communities. This annual series is designed to examine and explore the complex history of the African world, its present conditions, and its future trajectory through the lens of a specific country or people.

For its inaugural season, The Institute selected Ethiopia and, working in collaboration with the College of Performing and Visual Art and the Institute of Ethiopian Studies at Addis Ababa University, commissioned three leading Ethiopian scholars—Elizabeth W. Giorgis (Addis Ababa University), Surafel Wondimu (Addis Ababa University), and Dagmawi Woubshet (University of Pennsylvania)—to develop a series of programs anchored by a two-part interdisciplinary scholarly conference. Entitled Modern Nation/Ancient Roots, the program presented new research on Ethiopia’s history, racial diversity, and rich cultural heritage. The season also included a film festival, lectures, and a series of musical performances. By exploring the concept of Ethiopianism and the ways in which the country’s image as a sovereign Black nation has influenced and come to dominate discourse on Pan-Africanism and Afrocentrism, the conference considered Ethiopia’s contributions to debates on modernity in Africa and the postcolonial condition.

Postponed due to COVID-19, the two-part conference was presented online as a series of panels and webinars in October 2020. The Ethiopia-focused season will be followed by a new season centered on Ghana, for which The Institute has already commissioned a group of scholars whose work is concentrated on Ghanaian studies. The Ghana-focused season will be inaugurated in Fall 2021 and continue through Spring 2022.

On view 24 June through 31 December 2020 at Sharjah Art Museum, Aïda Muluneh’s Homebound: A Journey in Photography was developed in collaboration between The Africa Institute, Sharjah Art Foundation, and the Sharjah Museums Authority, and was also available via online virtual tours in Arabic and English. Curated by Salah M. Hassan with Sataan Al-Hassan as associate curator, the exhibition chronicled Aïda Muluneh’s journey as an artist and a photojournalist since her return to her homeland Ethiopia in 2007 after years of living, studying, and practicing in North America. The exhibition also included a selection of photographic works curated by the artist reflecting on her journey as a founder and director of Addis Foto Fest (AFF), which she established in 2010 in Addis Ababa. Addis Foto Fest is a biennial festival of photography organized by Desta for Africa Creative Consulting PLC.

As part of its Fall 2020 program, The Africa Institute presented Cinema of the African Diaspora, a series of screenings of seminal films by notable filmmakers from the African diaspora. The program included films by Salem Mekuria, Yemane Demissie, Raoul Peck, and Hubert Sauper. Each screening was followed by a discussion with the filmmaker or a distinguished scholar.

Throughout July and August 2020, The Africa Institute, in collaboration with the Sharjah Art Foundation and the Royal College of Art, presented a film program that consisted of screenings of films by three acclaimed filmmakers, including Jihan El-Tahri (Egypt, France); Manthia Diawara (USA, Mali); and John Akomfrah (UK, Ghana). Inspired by the educational mission of the three collaborating institutions as a contribution to the understanding, through film and art, of the recent protest movement against anti-Black racism across the globe, the program explored the destructive role of colonialism in Africa, as well as the racialized and institutional inequalities it has created. It also explored the axis of solidarity in the eras of decolonization. The program concluded with a series of webinars that featured the filmmakers in dialogue with scholars and art and film critics from around the world.

Furthermore, The Institute, in collaboration with Hind Mezaina, organized a film program on Youssef Chahine’s semi-autobiographical Alexandria Trilogy, consisting of three films by the Egyptian filmmaker. The program examined Chahine’s filmmaking career during the 1970s-80s and compared films in the Alexandria Triology to his earlier ones through the context of his personal history, as well as the social and historical settings of the films in comparison to Egypt and the Arab region at the time. Screenings were held in Africa Hall throughout January and February 2020.

AFRICA AND THE CHALLENGE OF COVID-19 WEBINAR SERIES

In response to COVID-19, The Institute organized a series of webinars that discussed the effects of the global virus on Africa and the steps African nations have been taking to stop its spread. Presented in May and June 2020, the series convened leading health experts in East and West Africa for discussions that explored measures being taken against the virus in each region, respective populations’ responses, and the challenge that African nations face vis-à-vis health infrastructure and an economic crisis, among other topics. 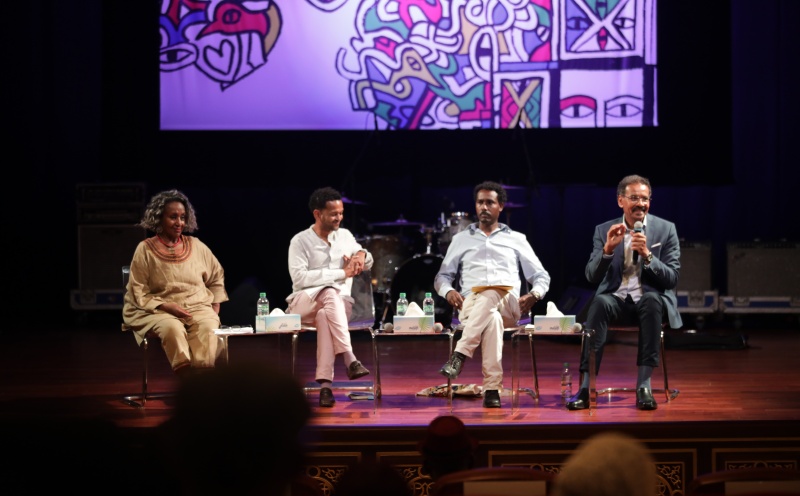 Image from Modern Nation/Ancient Roots. Courtesy of The Africa Institute.

Other news about The Africa Institute