Frieze today announces the artists participating in Frieze Projects at the inaugural edition of Frieze Los Angeles, taking place at Paramount Pictures Studios and celebrating Los Angeles’s position as a global arts capital. Launched with the first Frieze fair in 2003 and renowned for its bold, innovative interventions at the Frieze London and Frieze New York editions, Frieze Projects is an independently curated platform for artists to show ambitious, experimental work beyond gallery booths and outside the fair tent. At the inaugural edition of Frieze Los Angeles, artists will respond to the Paramount Pictures Studios backlot set, tangling with the dichotomy of artifice and reality in an environment built to look authentic on film. Frieze Projects Los Angeles will create an immersive art experience for visitors to explore this interplay, radically expanding the traditional art fair format and celebrating the practices of an array of local and international artists. Frieze Los Angeles will take place February 14 –17, 2019 and is supported by global lead partner Deutsche Bank.

Formerly of Los Angeles’s Hammer Museum, independent curator Ali Subotnick invited artists to present site-specific projects that range from installation to sculpture and performance. Works will be encountered around the New York Street backlot of Paramount Pictures Studios, in buildings, streets, and interior spaces that have been captured countless times in films, photographs, and television shows. Activating the cinematic setting, Frieze Projects will create a disorienting atmosphere where visitors are in two places at once: an artificial New York City within Los Angeles.

Leading guests from the fair tent to the streets of the backlot film set, stickers designed by Barbara Kruger will prompt visitors to contemplate philosophical questions such as “Who will write the history of tears?” “Are there animals in heaven?” or “Who salutes longest?”. Upon entering the studio backlot, Cayetano Ferrer’s dynamic wall piece evokes New York’s vernacular architecture and signage. Inside the classic brownstone building, a generic domestic interior will be transformed by Sarah Cain with an all-encompassing painting installation that spreads from the walls to the floors and windows and that will also feature a new stained-glass piece, as well as chocolate service, one of the artist’s vices while painting. Inside the neighboring apartment, Lisa Anne Auerbach will present one-on-one counselling sessions about collecting and creativity with a “Psychic Art Advisor.”

Down the street, Karon Davis will present The Game, a work that explores how schools have become a place for the hunted—our children—through dramatically staged life-size sculptures. Across the way, on a classic Brooklyn residential block, Hannah Greely will hang her paintings out to dry, on a clothesline spanning the apartment buildings. Creeping out from the drain at the bottom of the SoHo subway, Trulee Hall’s fluorescent serpent will snake its way in and out of windows and fire escapes, infesting the classic wrought-iron façade. In a nod to an outdated mode of broadcasting, Kori Newkirk’s antennae sculptures will land haphazardly across the backlot like tumbleweeds blown from the rooftops, gathering colorful detritus along the way.

In the Upper East Side space, Tino Sehgal’s constructed situation, This is competition, will engage with the commercial activity of an art fair, as two gallerists compete to sell the artist’s work. From the theater, visitors will encounter a sub-level set for an interior domestic space, transformed by Patrick Jackson into a classic dark back alley—reflecting on the magic of movie-making.On a nearby sidewalk, Catharine Czudej’s cartoonish representation of the archetypal American “Teamster”— inspired by a Chinese-made children’s toy—considers the position of working heroes in the real cities of America, and the fake ones we have imagined, both on the studio lot and elsewhere. Finally, Paul McCarthy will present an intervention in the backlot’s financial district with a monumental inflatable artwork, exhibited in Los Angeles for the first time. Additional outdoor sculptures by other international artists will be presented around the backlot and studio campus.

Further details and artist projects will be announced in the coming months.

Bettina Korek (Executive Director, Frieze Los Angeles) said “Frieze LA celebrates the incredible and thriving arts landscape in Los Angeles. As an extension of the fair’s programming beyond the booths, Frieze Projects asks artists to respond to the Paramount urban street backlot, a stand-in for a real city and a symbol of Los Angeles’s distinct and vast creative ecosystem. Frieze Projects will provoke visitors to consider the central role of art within the greater cultural landscape, and build on Frieze’s history of creating experiences that engage visitors in dialogue, debate, and discovery.”

Ali Subotnick said, “For the first edition of Frieze Los Angeles I invited artists who live, work or have histories with the city to develop projects responding to the fair’s untraditional site and context. Unlike most fairs and exhibitions that take place in parks, tents, or traditional white spaces, they are forced to grapple with a land of make-believe, built to be seen on film. Each artist embraced the opportunity, and challenge, and the results are often magical and otherworldly, surreal and hyper-real, but never dull.”

More to be announced soon 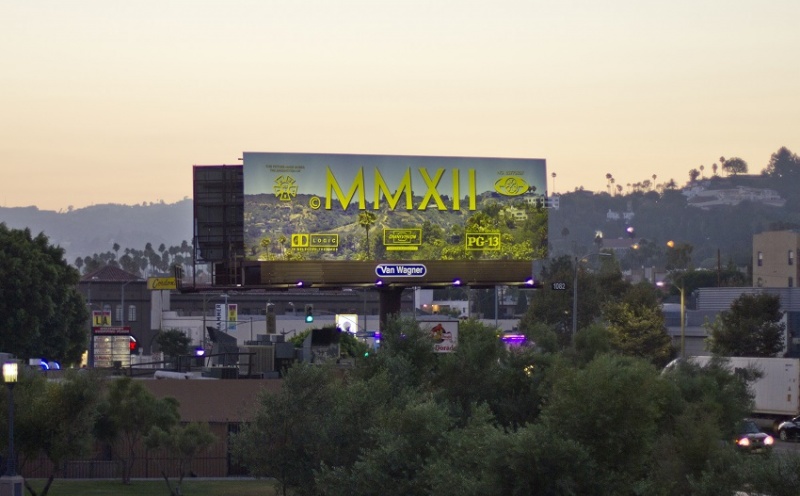 5. Cayetano Ferrer, End Credits on Hollywood, 2012. Billboard on Hollywood Boulevard. Installation view from Made in L.A. 2012, organized by the Hammer Museum and LA><ART. Photo: C.F.