Season Highlights Include the National Tour and Encore Engagement of Apollo’s Staged Adaptation of Ta-Nehisi Coates’ Between the World and Me, Launch of Apollo’s Artist-in-Residence Program, Advance Screening of the HBO Documentary The Apollo, and World Premiere Work from Ballet Hispánico

The Apollo Theater today announced details of its 2019 fall season, featuring a myriad of music, dance, and theater performances and film screenings that expand the nonprofit theater’s role as a partner, commissioner, and co-producer of programming that articulates African American narratives. Kicking off the season is the launch of Ta-Nehisi Coates’ book tour for the forthcoming novel The Water Dancer on Monday, September 23, marking the beginning of his three-year appointment as the Apollo’s inaugural Artist-in-Residence. The residency will continue in October with encore presentations of the Apollo’s critically acclaimed stage adaptation of Coates’ Between the World and Me, featuring the original music composed by MacArthur “Genius” Jason Moran and performed live by his trio, including Moran. Between the World and Me, which had its world premiere at the Apollo in 2018, will launch a national tour in Atlanta with other stops across the country to be announced. Widely considered the epicenter of black culture, the Apollo continues to provide a home to artists. Through its programming, educational and community initiatives, the Apollo continues to advance its commitment to creating a 21st century performing arts canon while tackling important social issues for Harlem, New York, and the nation.

“From our ongoing collaboration with Ta-Nehisi Coates to our Uptown Hall and Live Wire conversations, and our ongoing partnerships with Ballet Hispánico and ImageNation, there will be so much to offer next season. We look forward to the continued expansion of the Apollo as a home for artists with additional collaborations and the theaters at the Victoria in the year to come,” said Kamilah Forbes, Apollo Theater Executive Producer. “We are thrilled to offer an artistic home for Ta-Nehisi Coates over the next three years. We are also deeply honored to give more New Yorkers, and audiences across the nation, the opportunity to see Between the World and Me on stage, and to be part of the conversations on a topic that continues to resonate throughout our country.”

The Apollo season continues this fall with the Apollo’s famed Amateur Night at the Apollo, the original, large-scale talent show and one of the longest-running continuous events in New York City. Amateur Night at the Apollo welcomes back “Set It Off Man” Joe Gray, returning for his 31st season, along with newcomer Greginald Spencer, who will also perform as the “Set It Off Man” on alternate days throughout the year. Arists such as Ella Fitzgerald, Sarah Vaughan, Luther Vandross, Lauryn Hill, D’Angelo, and H.E.R. have all rubbed the famed tree of hope before taking the stage. This year’s line-up of contestants will compete for an ultimate cash prize of $20,000.

This fall, the Apollo expands its cinematic offerings with two film programs. The first is a free, advance screening of the HBO documentary The Apollo on Friday, October 4. Directed by Academy Award winner Roger Ross Williams, the film chronicles the unique history and contemporary legacy of the landmark institution. On Thursday, November 21, the Apollo will launch Apollo Film Presents: ImageNation’s Cocktails & Cinema. Evenings will include premier and advance screenings of Pan-African films, preceded by a reception with a live DJ/performance, followed by a talkback. The series will feature soul cinema—smart films, primarily directed by people of color, that explore the history, examine social issues, and highlight the humanity of Pan-African people in the genres of drama, science fiction, animation, comedy, documentary, experimental, and emerging media.

In November, the Apollo continues its partnership with Ballet Hispánico, the nation’s leading Latino dance organization in New York City. The company will present three works at each performance, including the world premiere of “Tiburones,” choreographed by Annabelle Lopez Ochoa, as well as restagings of “Naci” by Andrea Miller and “Con Brazos Abiertos” by Michelle Manzanales. Performances will take place on Friday, November 22 and Saturday, November 23, along with four Ballet Hispánico “Performances for Young People” presentations to more than 3,000 students from across New York City on Thursday, November 21 and Friday, November 22 in collaboration with Apollo School Day Live.

Gospel legends Yolanda Adams and Donald Lawrence headline the return of the Apollo’s annual concert, Holiday Joy: A Gospel Celebration on Saturday, December 21. A week earlier, on Saturday, December 14, gospel choirs from the Harlem community will perform for free under the theater’s famed marquee in the return of holiday favorite Coca-Cola Winter Wonderland followed by the Amateur Night Holiday Special showcasing recent winners of the show’s “Apollo Stars of Tomorrow.”

Once a month, the Theater celebrates its comedic roots with the Apollo Comedy Club, presented in partnership with the legendary Bob Sumner—producer of Def Comedy Jam, and the creator of Laff Mobb on Aspire TV. Apollo Comedy Club features the best up-and-coming talent in comedy today with more than 15 comedians this season. Full details and line up to be announced at a later date. The Comedy Club precedes the Apollo’s weekend music series, the Apollo Music Café, extending the theater’s late-night offerings.

The Apollo continues its longtime support of up-and-coming musical artists through its monthly Apollo Music Café, which takes place on Friday and Saturday nights at 10:00p.m. on the Apollo Soundstage. This fall, Apollo Music Café features more than a dozen forward-thinking, innovative artists performing across genres, from R&B, hip-hop, soul, and jazz to pop, funk, and rock. Highlights include vocalist and cellist Shana Tucker on Saturday, November 9, and FX “Pose” star Ryan Jamaal Swain, bringing his vocal talents to the Café on Saturday, December 7.

A hallmark program for the institution that extends the Apollo’s commitment to enhancing the Harlem community, the Theater’s year-round education and community initiatives continue this fall with Apollo’s Live Wire conversations, part of the Theater’s education series that honors iconic artists who have impacted the arts and culture. The first Uptown Hall of 2020 will be the Apollo and WNYC’s annual Martin Luther King Jr. Program commemorating the legacy of Dr. King on Sunday, January 12. The event will take place in front of a live audience and will be taped for a future broadcast on New York Public Radio and NPR stations nationwide. The Apollo Young Producers, a collective comprised of Apollo Theater Academy alumni who create and develop events to connect young artists to the Apollo, will present the fourth annual Harlem Cultural Connect on Saturday, November 2. Additional education offerings will include an Apollo Theater Academy Career Panel, part of the institution’s career development programming for teens and adults, with Careers in Graphic Novels & Visual Storytelling on Tuesday, December 17.

While fall and winter programming takes the stage at the Apollo’s landmark home, the institution continues to develop the theaters at the Victoria, marking the first physical expansion in the Apollo’s history and the first phase in the expansion to the Apollo Performing Arts Center. For more information about the theaters at the Victoria and the Apollo’s mission to work with and support a greater number of emerging and established artists of color across disciplines, click here.

**A complete calendar listing of 2019 fall and winter programming is available in the press release link below (PDF). ** 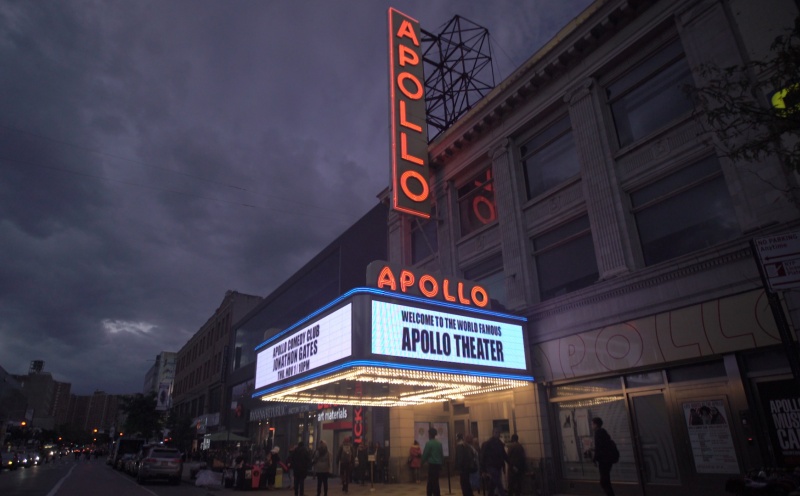