The Apollo Theater will raise the curtain on the encore production of the critically acclaimed staged adaptation of Ta-Nehisi Coates’ Between the World and Me—the National Book Award-winning work described as a “Powerful . . . a searing meditation on what it means to be black in America today” by The New York Times—on Friday, October 25, running through Monday, October 28. Developed and directed by Apollo Theater Executive Producer Kamilah Forbes, the production features original music composed by MacArthur “Genius” Jason Moran and performed live by his trio, bassist Mimi Jones and drummer Nate Smith. The cast includes Tony-nominated actress Michelle Wilson (Sweat); actress Pauletta Washington (Philadelphia, Antwone Fisher); artist, poet, and TED Global Fellow Marc Bamuthi Joseph; and actor Greg Alvarez Reid (Between the World and Me). Additional performers will be announced in the coming days.

Between the World and Me expands the nonprofit theater’s role as a partner, commissioner, and co-producer of programming that articulates African American narratives and furthers its role as a catalyst for social and civic advocacy—using the arts as a vehicle to provide a forum for conversations on important and timely issues facing the Black community.

Throughout the development process of the Between the World and Me, Coates has been collaborating with the Theater, and he will now call the Apollo—widely considered the epicenter of Black culture—a home for the next three years as its inaugural Master Artist-in-Residence. The initiative kicked-off with a sold-out evening featuring Coates in conversation with Oprah Winfrey about his latest work, The Water Dancer, on the day on which it was chosen to re-launch Oprah’s Book Club. Subsequent programs in the residency will take place on the Apollo’s iconic stage and in the new Apollo spaces in the Victoria Theater in Fall 2020, further deepening the relationship between Coates and the Apollo.

Prior to the Harlem run, Between the World and Me will play for two performances at Atlanta Symphony Hall on Tuesday, October 22, presented by The Collective Culture in collaboration with the Apollo. With additional stops to be announced at a later time, the tour will deepen the conversation about the experience of being Black in America through the eyes and words of Coates.

During the run of Between the World and Me, the Apollo will continue to expand its educational and community initiatives with a special School Day Live performance of the work for local students in grades eight through 12. The Theater’s education team has also developed special educational resource guides and sample lesson plans for students and teachers preparing to see the performance.

Based on the award-winning book by Ta-Nehisi Coates, Between the World and Me takes difficult but necessary conversations around Black life and death and places them center stage. A profound work that pivots from the biggest questions around racism and police violence to the most intimate concerns of a father for his son, Between the World and Me offers a powerful framework for understanding our nation’s history and asks: What is it like to inhabit a Black body and find a way to live within it? And how can we honestly reckon with this fraught history and free ourselves from its burden? Between the World and Me, both the book and the theatrical event, is an eye-opening, emotional look inside these conversations.

Harlem residents, employees, business owners, and students can save 50% on tickets to performances of Between the World and Me. Half-Off for Harlem tickets can be purchased in person at the Apollo Theater Box Office. Ticket buyers must provide proof of residence or work ID. Offer available only while supplies last. Half-Off for Harlem for this production is supported by JL Greene Arts Access Fund in The New York Community Trust. 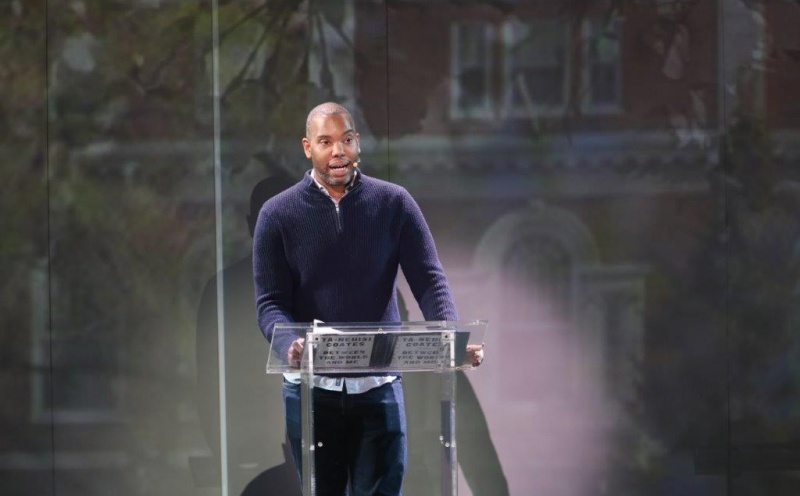