An avid participant in the art world, Dr. Scher has lectured and published extensively on medieval and Renaissance art. Dr. Scher taught at the Department of Visual Art at Brown University from 1961-1974, where he was Chair for the last two years. He was President and CEO of Scher Chemicals, Inc. until retiring in 2004. After retiring, Dr. Scher continued his ventures as an art historian, guest curator, and lender, helping to organize exhibitions in New York (the Frick and the Metropolitan Museum of Art), D.C. (the National Gallery of Art), and Edinburgh (Scottish National Gallery). His own collecting activities have focused on commemorative, especially Renaissance, portrait medals. Dr. Scher’s continued participation in the humanities includes sitting on visiting committees at the Metropolitan Museum of Art; being an active member of the Visiting Committee for Collections at the Frick Collection, where he is donating the bulk of his collection; serving as a council member of the Yale Club of New York City, and as a member and the current chair of its Library, House, and Art Sub-Committees; being a member of the Yale Library Associate Trustees; and serving on the Board of Visitors of the Tyler School of Art and Architecture at Temple University. Dr. Scher received the Yale Medal in November 2015 and the British Art Medal Society’s President’s Medal in October 2018.

David Revere McFadden joined the staff of the Museum of Arts & Design as Chief Curator in 1997, where he retired in 2013. Today, he is Chief Curator Emeritus at MAD. Prior to MAD, McFadden was Curator of Decorative Arts and Assistant Director for Collections and Research (1978 to 1995) at Cooper Hewitt, Smithsonian Design Museum. For six years, he served as President of the International Council of Museums’ Decorative Arts and Design Committee. McFadden has organized over one hundred and fifty exhibitions on decorative arts, design, and craft, covering developments from the ancient world to the present day. Exhibitions include Wine: Celebration and Ceremony; L’Art de Vivre: Decorative Arts and Design In France 1789-1989; Scandinavian Modern Design 1880-1980; Hair; Radical Lace and Subversive Knitting; Pricked: Extreme Embroidery; Slash: Paper Under the Knife; Second Lives: Remixing the Ordinary; Dead or Alive: Nature Becomes Art; Swept Away: Dust, Ashes, and Dirt in Contemporary Art and Design; and Otherworldly: Optical Delusions and Small Realities. McFadden has published over 160 books, articles, catalogues, and reviews worldwide, and has delivered over 300 lectures and papers, and has served on many international panels and juries. For his work in cultural affairs, McFadden has been named Knight, First Class, of the Order of the Lion of Finland (1984); Knight Commander of the Order of the Polar Star of Sweden by King Gustaf VI (1988); and Chevalier de l’Ordre des Arts et des Lettres by the Republic of France (1989). McFadden has received the Presidential Design Award for Excellence three times (1994, 1995, and 1997).

Sanchita Balachandran is Associate Director of the Johns Hopkins Archaeological Museum and Senior Lecturer in the Department of Near Eastern Studies at Johns Hopkins University, where she teaches courses related to the technical study and analysis of ancient objects, and the history, ethics, and practice of art conservation. Her courses incorporate the close examination of ancient objects from the Johns Hopkins Archaeological Museum using non-destructive examination techniques. Recent hands-on courses include “Ancient Color: The Technologies and Meanings of Color in Antiquity” (2018) and “Recreating Ancient Greek Ceramics” (2015). A recent exhibition, Who Am I? Remembering the Dead Through Facial Reconstruction, involved collaborating with a team of specialists to reconstruct the faces of two ancient Egyptian women. Balachandran trained at the Institute of Fine Arts, New York University as a conservator specializing in archaeological materials. She is a Fellow of the American Institute for Conservation. Balachandran is the founder and director of Untold Stories, a non-profit organization that represents and preserves a fuller spectrum of human cultural heritage in art conversation.

Hailed as one of the most respected experts in the design field, Cristina Grajales served as Director of 1950 Gallery in New York City from 1990 through 2000. Under Grajales’ tenure, 1950 Gallery developed into the premiere resource for European mid-century furniture, lighting, and design objects, which propelled the gallery towards worldwide recognition. In addition to her accomplishments at 1950, Grajales has served as an advisor to a number of collectors, assisting them in building valuable collections. Grajales established Cristina Grajales Gallery in 2001, which has since established itself as one of the forerunners in the design world. Cristina Grajales Gallery specializes in contemporary design, dealing in masterpieces of the twentieth century, and in cultivating the work of emerging contemporary designers. Founded in 2001, Grajales’s lecture series, titled Dialogues with Design Legends, at the 92nd Street Y was the first of its kind. Grajales is a frequent guest lecturer, panelist, and contributor to various publications.

About the Iris Foundation Awards

The Iris Foundation Awards were created in 1997 to recognize scholars, patrons, and professionals who have made outstanding contributions to the study and appreciation of the decorative arts and thereby help to sustain the cultural heritage of our world. The Awards are named for Bard Graduate Center Founder and Director Susan Weber’s mother, Iris Weber. Proceeds from the Iris Award event fund graduate student scholarships and fellowships. For more information, call 212-501-3058 or email support@bgc.bard.edu. 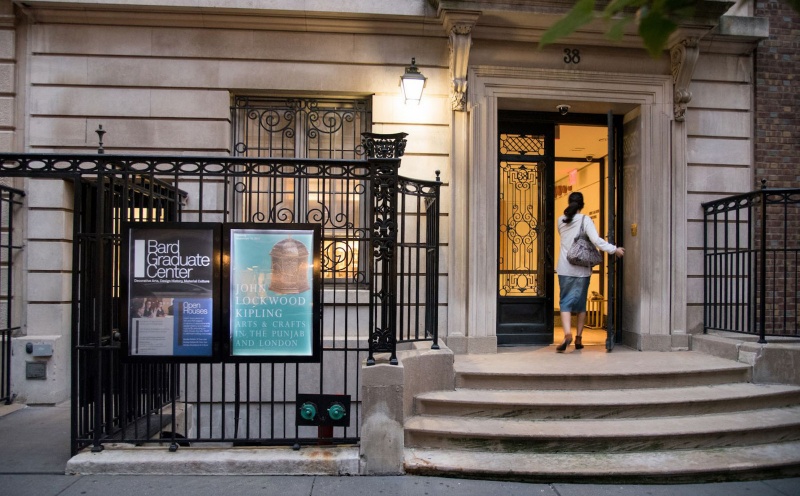