Featuring a Concert Series on the Plaza, Virtual Author Talks, Climate Reads Series, Brooklyn Resists Panels, and the Return of Cinema Ephemera, BPL’s Projection of Music and Images on the Façade of Central Library at Sunset

As Brooklyn Public Library (BPL), continues to reopen its branches safely to residents of the borough, it announced today its initial lineup of free in-person and virtual arts and cultural programming through September 2021.

The plaza at Central overlooking the majestic Grand Army Plaza will host free weekly concerts and performances all summer long featuring Inyang Bassey, DJ Max Glazer, and Innov Gnawa, and the return of Cinema Ephemera, BPL’s weekly evening projections of meditative music and images on the façade of Central Library. The Library will also continue virtual author talks and discussions with activists and historians in conjunction with the exhibition titled Brooklyn Resists on last summer’s Black Lives Matter protests, BPL’s summer 2021 programming expands on the Library’s mission to provide access to diverse voices and builds on the Library’s commitment to providing arts, culture, and enrichment during the pandemic to the 2.7 million people who call Brooklyn home.

Beginning on Monday, July 5, and continuing Monday evenings through August, the Library presents Cinema Ephemera, last summer’s popular series of projections, featuring art and music on the façade of Central Library after dusk. The program will include works by artists such as Neil Goldberg and Holger Thoss as well as recordings of past BPL Presents performances by Curtis Stewart and the Orchestra of St. Luke’s, and special archival footage of Prospect Park, Brooklyn Botanical Gardens and the Grand Army Plaza. This summer, the series will follow BPL’s concert series on the Central Library’s Plaza on Wednesday evenings, for a night of music and film under the stars.

“As the Library continues to safely reopen, we are eager to welcome back our communities with an array of cultural programs that reflect and respond to critical issues facing our community, from climate change and systemic racism to the repercussions of last year’s Black Lives Matter protests and the ongoing pandemic,” said László Jakab Orsós, Vice President of Arts and Culture at Brooklyn Public Library. “The response we received from Brooklynites to Cinema Ephemera last summer was immense and I look forward to expanding the series this year, coupling it with some of the most exciting and inspiring musicians and DJs throughout Brooklyn, celebrating the many distinct voices and backgrounds that shape our community.”

BPL’s Center for Brooklyn History (CBH) continues the Brooklyn Resists initiative in conjunction with the physical exhibition on view at now at 128 Pierrepont Street, exploring racial protest in Brooklyn from abolition to the present, with  virtual programs, including a panel on June 30 with historian and author Johanna Fernández, Brooklyn-based activist Zenat Begum, New York State Senator Jabari Brisport, and The Intercept’s Akela Lacy, exploring the many grassroots, community-based responses to 2020’s pandemic and Black Lives Matter movement.

BPL welcomes photographers Bob Gore, Madison Swart, and Terrence Jennings on July 15 to discuss documenting the 2020 protest movement in Brooklyn with New York Times Metro columnist David Gonzalez, who served for many years as the co-editor of the newspaper’s Lens Blog. To learn more about Brooklyn Resists, including how Brooklynites can submit their own images and ephemera to the initiative’s online exhibition, please visit https://www.bklynlibrary.org/brooklyn-resists.

Following the overwhelming success of virtual author talks in spring 2021, which were attended by more than 9,000 people from across Brooklyn and around the world, the Library continues its author talk series over the summer with Mary Dixie Carter discussing her first-ever novel, The Photographer (July 21). BPL’s environmentally focused Climate Reads also continues this summer featuring a virtual conversation with indigenous scientist Robin Wall Kimmerer on her deeply insightful work Braiding Sweetgrass, which draws on her life as an indigenous scientist, and as a woman (June 29).

Throughout the summer BPL’s outdoor audio experience Whispering Libraries continues at library branches across Brooklyn, featuring curated neighborhood playlists of music, poetry, oral histories, spoken literature and more. BPL offers additional opportunities outside including outdoor reading rooms at libraries across the borough; free outdoor Wi-Fi and laptop loans; the “Outdoor Living Room,” part seating area and part art installation created by Brooklyn-based artist Heinrich Spillmann at BPL’s Central Library; and a host of outdoor programs including StoryWalk—pages of a book or verses of a song placed every few feet around the perimeter of the library so as families stroll around outside they can read or sing together.

BPL Presents’ programming builds upon the Library’s more than 60,000 free programs offered each year. While the Library’s physical services are adjusted to best serve public health needs, patrons can access the collection including e-books and audiobooks, podcasts, and resources and classes for job seekers, parents, adult learners, and curious people. 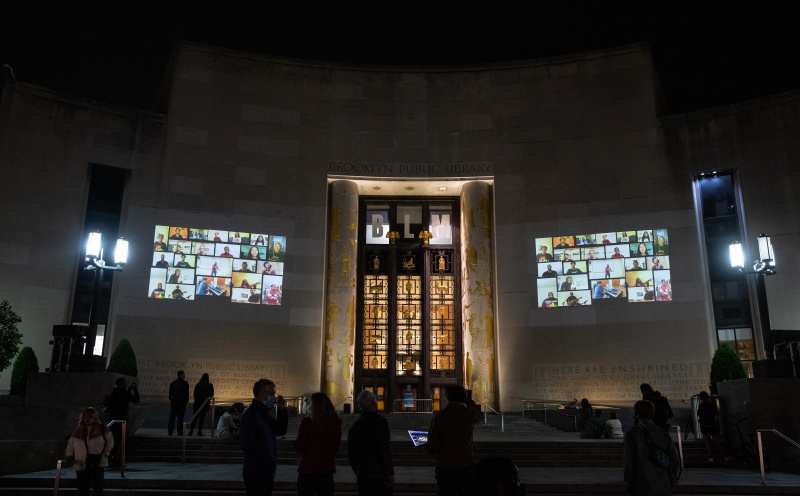