Seven monumental sculptures by acclaimed Basque artist Eduardo Chillida will be installed by The Nelson-Atkins Museum of Art in two locations: the museum’s Donald J. Hall Sculpture Park and Theis Park, which is just south of the museum. The seven-month installation, Chillida: Rhythm-Time-Silence, is presented in collaboration with Ordovas and in cooperation with the Kansas City Parks and Recreation Department.

“This is the result of many conversations about continuing to enliven the Kansas City landscape with art,” said Julián Zugazagoitia, Menefee D. and Mary Louise Blackwell CEO & Director of the Nelson-Atkins. “The Nelson-Atkins is evolving as a cultural gem in Kansas City, and it has been our desire to activate areas surrounding the museum with art, which will increase community engagement. Art is an extremely powerful way to bring people together.”

The steel and carved stone sculptures will be installed April 24 and 25 – three on the south lawn of the Nelson-Atkins and four in Theis Park. Chillida: Rhythm-Time-Silence was first shown at Ordovas in New York in Fall 2015 and will be on view in Kansas City until the week of December 3.

The museum’s installation in a public park had its genesis in a series of community conversations regarding a cultural district in the heart of Kansas City. Arts, civic and neighborhood leaders discussed how to activate and inspire the area to encourage walking and biking.

“Chillida’s massive and abstract steel sculptures perform the most human of gestures,” said Jan Schall, Sanders Sosland Curator of Modern Art. “Arms embrace space, rise in exuberant praise to the sky, and form arcs of passage. And their deep, ruddy color sings against the green of grass and trees.”

Eduardo Chillida (1924–2002), one of the most important sculptors of the 20th century, made his career a life-long study of mass and form within space. His education began in architecture at the University of Madrid, but he abandoned this path to primarily devote time to sculpture. Yet, Chillida’s sculptural oeuvre reveals this early architectural training—utilizing structural organization, development of various materials, spatial relationships, and experimentation with monumental and small scale.

Early in his career, Chillida was seduced by the Greek tradition of sculpting the figural form in plaster and stone. But the artist’s return to his homeland of the Basque region in Spain in 1951 signaled a change in both his formal vision and favored medium. Chillida no longer created representational figures or landscapes, but instead worked solely in abstraction, exploring its relationship to the physical environment. He also turned away from the white marble of the Mediterranean to embrace the more unyielding materials of iron and steel. These specific media nod to the Basque’s industrial practices, particularly to its ore mining and blacksmithing traditions. Like many Spanish predecessors, Chillida’s work celebrates the dark qualities of the Basque landscape. He described the land as comprised of “black light” in comparison to the lightness of Greece.

From this turning point, Chillida’s work experimented with many dualities, such as interior space and exterior shape, solid mass and empty voids, simplicity and balance, weight and weightlessness. Regarding his sculptures, the artist said they are “a rebellion against gravity.” Chillida also developed a close association with various philosophers, especially Martin Heidegger and his book The Art and the Space. 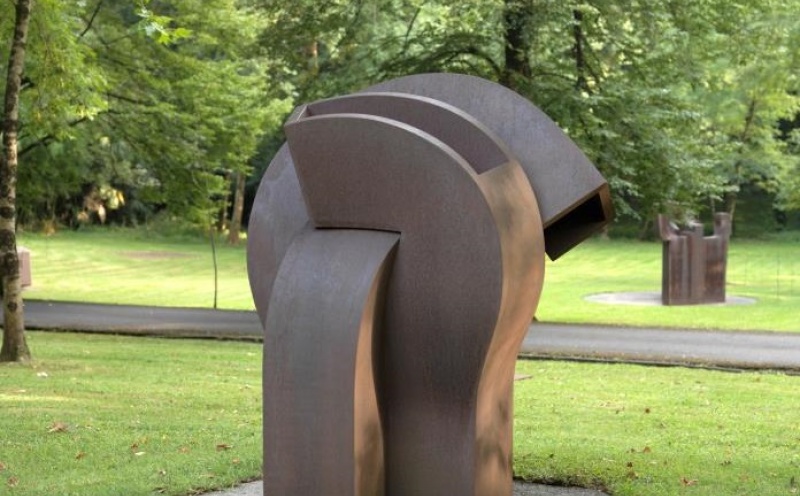