In Collaboration with Local Vocalists and Artists, Candiani Honors Human Labor by Reimagining Cincinnati’s Industrial Past

In conjunction with its public reopening on July 1, 2020 the Contemporary Arts Center (CAC) in Cincinnati will present an exhibition of new, site-responsive works by Mexico City-based artist Tania Candiani that explores the history of mechanization and labor and reasserts female voices within the male-dominated narrative of American industry. Emerging from two years of intensive archival research, Candiani’s project investigates and reimagines Cincinnati’s Industrial Expositions that took place between 1870 and 1888. With contributions from local artists and artisans, Sounding Labor, Silent Bodies weaves together film, sound, sculpture, works on paper, and historical ephemera to foreground the underrecognized roles of laborers, specifically women, to challenge and expand historical notions of industry, labor, and utopianism. Originally scheduled to open in April 2020, Sounding Labor, Silent Bodies will be on view July 1, 2020 through January 17, 2021.

“We are excited reopen the CAC with an exhibition that unites Tania’s visionary practice with our city’s history and creative community,” commented Raphaela Platow, the CAC’s Alice & Harris Weston Director and Chief Curator. “By engaging directly with local historical materials and partnering with local artists and fabricators, Tania’s vision is truly embedded in Cincinnati’s cultural context, both past and present, and will be especially meaningful to our visitors. Through careful research and collaboration with members of our creative community, Sounding Labor, Silent Bodies explores the evolving legacy of the city’s industrial dreams while offering ways to challenge and reinvent them. This exhibition is also part of the city-wide Power of Her initiative, celebrating the centennial of the suffragette movement.”

Building upon her history of presenting interdisciplinary installations and performances that explore human labor, technology, and their impacts on the past and the future, Tania Candiani’s (b. 1974, Mexico City) new project with the CAC continues her practice of rooting her works in the specific history of the sites for which she creates them. In recognition of her study-intensive artistic process, Candiani was awarded a Smithsonian Artist Research Fellowship in 2018, during which time she conducted most of her research for Sounding Labor, Silent Bodies. Initiated in 2017 by guest curator Kate Bonansinga, Director of the School of the Art in the College of Design, Architecture, Art, and Planning at the University of Cincinnati, this exhibition is organized in collaboration with recently appointed CAC Senior Curator Amara Antilla. It delves into the city’s archives to conjure an informed and creative response to the forgotten contributions of human labor at a time when it was increasingly mechanized.  The message resounds today, when technology is increasingly directing our daily lives, and robots are replacing us.

The cornerstone of Sounding Labor, Silent Bodies is a new CAC-commissioned film directed by Candiani, which captures a performance by Cincinnati’s feminist and social justice-focused MUSE Women’s Choir. Documented by a local filmmaker and staged in a building that housed one of Cincinnati’s former breweries, the choral performance evokes the sounds of the 19th century machines that were instrumental in the city’s preeminence as a manufacturing hub. In a visionary display of collective creative expression, the performance reframes the impact of mechanization through the voices of an all-female choir. The score, which was co-written by Candiani and Mexico-based sound artist Rogelio Sosa, will be on display at the CAC alongside the film.

Sounding Labor, Silent Bodies showcases an additional film directed by Candiani featuring a local actress reciting a monologue created from excerpts of the opening addresses of Cincinnati’s Industrial Expositions, which were held annually between 1870 and 1888. Promoting utopian visions for the future that underscored the primacy of industry and scientific innovation, these expositions were largely patriarchal events that undervalued the participation and input of women. By extracting, reframing, and vocalizing the very words presented during pivotal historical events from which women were largely sidelined, the female-delivered performance reclaims elements of a male-dominated industrial past, offering inventive ways to examine and interrogate socio-economic structures whose legacies remain with us today.

Additionally, the exhibition will present two original sculptural works by Candiani, produced in collaboration with local Cincinnati fabricators that showcase the artist’s in-depth research into local history. During her investigation of Cincinnati’s archives, Candiani discovered a photograph that informed one of Weinold Reiss’s mosaics depicting factory workers that originally hung at Cincinnati’s Union Terminal (1933).  The photograph includes a woman; Reiss’s mosaic does not.  Candiani collaborated with Rookwood Pottery, the city’s world-renowned ceramics studio that was at its height during the late 19th century and was founded by a woman, to create a ceramic sculpture that represents and honors the female worker that Reiss disappeared.

As part of her work, Candiani has also realized a cast reproduction of an architectural element from Cincinnati’s Music Hall, which was purpose-built to host the Industrial Expositions. These works are presented alongside archival lithographs from the city’s Industrial Expositions, which capture the era and events that informed this project.

“Tania is an artist whom I’ve long respected and admired for her ability to respond so perceptively to the places in which she grounds her work. I’m excited to partner with the CAC to bring her insightful eye to Cincinnati as she excavates the social and economic history of our city through the lens of creative production,” said exhibition curator Kate Bonansinga. “Prompting audiences to examine the events of our past that define our present, Sounding Labor, Silent Bodies offers a revisionist glimpse into an era whose inheritances we continue to grapple with, and whose ideals—progress and innovation—we continue to strive for.”

“By representing a pivotal era of American history through a prism of female visions and voices, Tania prompts her audience to critically examine the past while envisioning a different, more inclusive future,” noted CAC Senior Curator Amara Antilla. “Sounding Labor, Silent Bodies is a testament to the ways in which creative practice intersects with historical study to deconstruct dominant narratives and offer up new ones. While Tania’s project is rooted in Cincinnati, its implications stretch beyond city limits to address broader issues that are central in our contemporary cultural and political conversations.”

Since closing to the public on March 13, 2020 due to COVID-19, the CAC has been working diligently to implement a plan for reopening that ensures the safety of its staff and visitors. When visiting the CAC, guests should anticipate a range of new health and safety procedures, including limited visitor capacity and timed ticketing, frequent sanitation of all accessible surfaces, and contactless viewing experiences. For more information on the CAC’s updated guidelines and protocols, or to reserve a ticket for admission, please visit cincycac.org.

In 2003, the CAC moved into the Lois & Richard Rosenthal Center for Contemporary Art, the first museum designed by architect Zaha Hadid and the first museum in the US to be designed by a woman. Recent programming highlights include landmark exhibitions of work by Ugo Rondinone, Do Ho Suh, Titus Kaphar, Saya Woolfalk, Swoon, and Akram Zaatari, and the first solo museum presentations of artists such as Maria Lassnig, Shilpa Gupta, JR, Anri Sala, Michael Sailstorfer, Pia Camil, Albano Afonso, and Pamela Phatsimo Sunstrom. The CAC also launched an ongoing performance program in 2011, which is now accompanied by the This Time Tomorrow annual performance festival. Artists presented include Okwui Okpokwasili, Taylor Mac, Kaneza Schaal, and Tanya Tagaq, with North American premieres from international artists such as Kate McIntosh, Ingri Fiksdal, Mithkal Alzghair, and Raquel Andre. 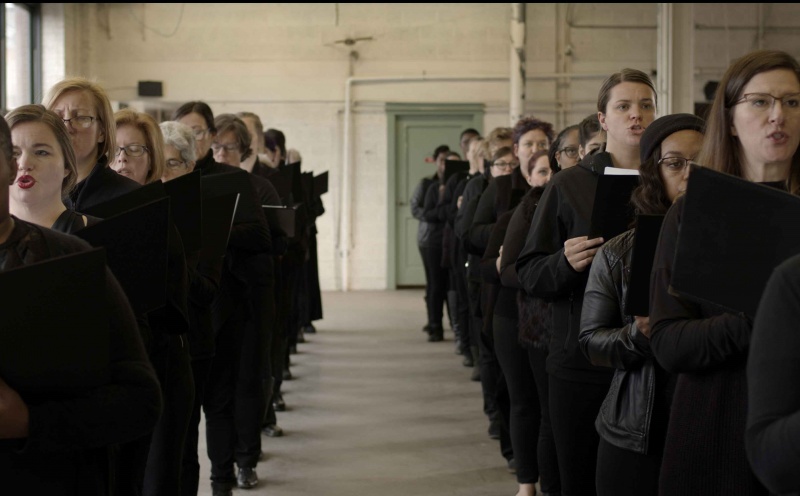