DAG, a leading gallery dedicated to Indian modern art, today announced a dynamic spring 2020 schedule of exhibitions at its galleries in India and New York and at partner institutions. Reflecting DAG’s commitment to advancing appreciation of Indian art globally, the spring exhibitions represent a breadth of practices and genres—from masterpieces of the 1950s, 1960s, 1970s, and 1980s, expansive surveys of Tantra art and Primitivism, to the largest and most comprehensive museum-exhibition of Bengal art, a major collaboration with the National Gallery of Modern Art (Delhi) and the Ministry of Culture, Government of India.

“Our spring 2020 roster of major exhibitions and exhaustive museum shows represent DAG’s ongoing commitment to bring India’s cultural and artistic history to wider audiences both in India and around the globe,” said Ashish Anand, CEO and Managing Director of DAG. “From a landmark collaboration with the NGMA and the Ministry of Culture, on the back of the much feted Drishyakala museum at the UNESCO World Heritage Site of Red Fort in Delhi, to a range of thematic exhibitions highlighting some of the most influential Indian masters and their masterpieces, DAG’s spring 2020 exhibitions capture the breadth, variety, and distinctive elements of Indian art while also presenting some of the finest examples of India’s artistic production. We are grateful to be working with our curators and partners to support our mission on an international scale and at the highest level of scholarship.”

DAG’s roster of exhibitions for spring 2020 include:

Ghare Baire | The World, the Home and Beyond | 18th to 20th Century Art in Bengal Old Currency Building, Kolkata, India

This month, DAG, with the Ministry of Culture, Government of India and the National Gallery of Modern Art, India, opened the largest and most comprehensive museum-exhibition of Bengal art and artists. Curated by DAG, the exhibition features over 600 works, signifying Bengal’s centuries-old rich and diverse artistic history and its important contribution to India’s cultural heritage. Tracing Bengal’s artistic heritage over three centuries, Ghaire Baire more broadly represents the history of India, and the collective concerns and aspirations of millions of people, extending far beyond art. The exhibition was inaugurated by India’s Prime Minister, Mr. Narendra Modi in the recently restored heritage monument in Kolkata.

ON VIEW AT DAG NEW YORK

Primitivism and Modern Art brings together more than 70 works by Indian modernist painters to explore the stylistic influence of primitivism and its motifs in non-Western contexts. Curated by Dr. Giles Tillotson, a leading scholar in Indian art history and architecture, the exhibition showcases works by some of the most recognized Indian masters, including Jamini Roy, Rabindranath Tagore, Amrita Sher-Gil, M.F. Husain, and F.N. Souza, juxtaposing these vastly different interpretations of the genre to demonstrate the breadth of primitivism in India. Notably, these works preserve their traditional Indian heritage while acknowledging and experimenting with contemporary European practices. The exhibition is accompanied by a comprehensive publication and is currently on view in DAG’s Mumbai gallery.

The first national-level retrospective of the Madras Art Movement, this exhibition celebrates an impressive body of work by the region’s most important artists. The influence of the Madras Art Movement in India’s national discourse has largely been overlooked, even though it carved out a space within the region with its vision, innovation, creativity, and techniques. With Madras Modern, DAG fills this void, and introduces the movement’s reformed aesthetic vision—the regional modern—a parallel stream of modernism which developed and held its own against the existing benchmarks of modernism as, for example, that of the Bombay Progressives.

ON VIEW AT DAG AT THE CLARIDGES, NEW DELHI

The Fifties Show revisits a momentous decade of newly independent India that had just put its colonized past behind it to embrace a triumphant modernism. The 1950s was a period of hope and celebration, which saw the creation of works emblematic not just of the decade but of the context and subtexts of modernism itself. A period when the best and brightest in the Indian art world—such as Nandalal Bose, M. F. Husain, S. H. Raza, F. N. Souza, G. R. Santosh, K. K. Hebbar, Adi Davierwalla, Shanti Dave, Dhanraj Bhagat, etc.— created some of their most significant masterpieces.

Covering over a century of artistic production, Masterpieces will exhibit prime examples of modern Indian art. Selected based on quality, technique, and skill; content and context; originality; and other considerations including rarity, longevity, and universality, the works in the exhibition have been acknowledged as “masterworks” of modern Indian art.

ON VIEW AT DAG, MUMBAI

The 1960s was a period of immense change around the world, and it had deep ramifications on India’s sociopolitical scenario. The art produced in the 1960s was more ‘serious’ than that of a previous generation, its palette more nuanced, and its context more firmly rooted in the cultural moorings of the country. This significant exhibition features artists from the Progressive Artists’ Group (such as S. K. Bakre, F. N. Souza, M. F. Husain, and Krishen Khanna), Group 1890 (such as Himmat Shah, Ambadas, Jyoti Bhatt, and J. Swaminathan), India’s folk modernists (such as, Jamini Roy and Madhvi Parekh), as well as other high modernists (such as Bikash Bhattacharjee, Shanti Dave, George Keyt, G. R. Santosh, and Anupam Sud).

Early Bengal explores the dialogue between artists of the British Raj and traditional Indian miniature painters in the late 18th and early 19th century. Early Bengal Oils were a result of Indian miniature artists interacting with the techniques used by European artisans. They used these skills to create modernized renditions of traditional subject matter. Through this exhibition, DAG shows Early Bengal Oils as derivative in technique but highly original in context and celebrates these Indo-European miniature paintings that have been thus far overshadowed by other modernist schools of art.

(In collaboration with the Archaeological Survey of India) 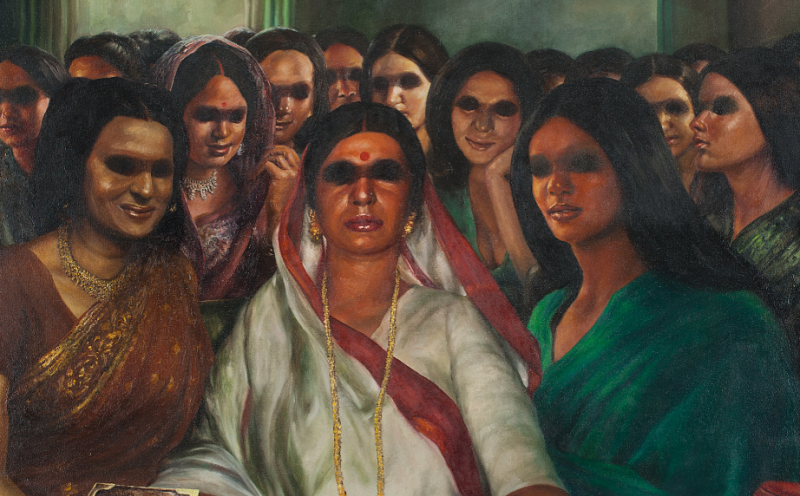