The Dallas Museum of Art (DMA) will present an exhibition of works by Günther Förg (1952-2013) at the Palazzo Contarini Polignac in Venice, during the Biennale Arte 2019. An official Collateral Event of the 58th International Art Exhibition of La Biennale di Venezia, Förg in Venice follows the Dallas presentation of Günther Förg: A Fragile Beauty, the first American museum exhibition devoted to the artist in more than three decades, organized by the Dallas Museum of Art in collaboration with the Stedelijk Museum, Amsterdam in 2018. Developed in close collaboration with the Estate of Günther Förg, Förg in Venice brings together over 30 pieces from the artist’s multidisciplinary practice—focusing on his paintings and lesser known sculptural work—to reflect on the expansive and intuitive methods of this manifold, intellectual artist. The exhibition is curated by art historian Dr. Elisa Schaar. It is informed by research made available by the Dallas exhibition curated by Dr. Anna Katherine Brodbeck, the DMA’s Hoffman Family Senior Curator of Contemporary Art. The exhibition is on view May 11 through August 23, 2019.

“Following the Dallas Museum of Art’s major exhibition of works by the artist in 2018, we are pleased to bring the work of Günther Förg to yet another international stage during Biennale Arte 2019 and engage a new generation of global audiences with this significant artist whose practice has influenced generations of art history,” said the Eugene McDermott Director of the DMA, Dr. Agustín Arteaga.

Born in 1952 in Füssen, Allgäu, Germany, Förg is considered one of the most significant German artists of the post-war generation, renowned for his experimental and provocative oeuvre rooted in the history of art. In his pioneering cross-disciplinary practice that challenged the limits of artistic disciplines, Förg explored the language of abstraction and expressionism, appropriating tropes borrowed from modern art and architecture.

Italy and Italian architecture played a central role in the development of Förg’s career. In 1982 he made his first trip to the country, which was the catalyst for his well-known series of photographs reflecting on buildings with cultural and political significance, from monumental structures in Italy to Bauhaus buildings in Tel Aviv. Working in photography, Förg was able to probe the relationship between art, architecture and spatial interventions, a continuous theme throughout his entire practice, and one that the staging of the Venice presentation seeks to highlight. Förg’s work was exhibited as part of the Biennale Arte 1993 in Il Viaggio verso Citera, but Förg in Venice will fulfil the artist’s wish to have a solo exhibit during the International Art Exhibition of La Biennale di Venezia that he was not able to realize during his lifetime.

Förg in Venice offers a new perspective on this multifaceted artist in an unparalleled Venetian setting, where its furnishings and decorations play a central role in contextualizing the art on view. The exhibition will explore Förg’s aesthetic and conceptualist concerns, not only with respect to his artistic output, but also concerning the context in which his work is displayed. As an artist, Förg not only challenged the conventions of media, but included and implicated both the physical space and the viewer in the display of his artworks. He considered the space, the placement and the positioning of his work as inherent to the work itself. During his lifetime, he would deliberately paint over gallery walls and repurpose doorways and windows as integral elements—he even manipulated the glazing of his work as a reflective play to create unexpected meditations.

In line with this, the artist enjoyed installing his work in storied contexts, often doing so with sensitive yet minimal intervention. This exhibition continues that tradition, maintaining the Palazzo’s overall atmosphere while reflecting Förg’s inventive and playful spirit. Considered within the setting of the Palazzo Contarini Polignac—a classical, romantic and unabashedly beautiful location on the Grand Canal of Venice—unexpected encounters with Förg’s versatile and dexterous work invite the viewer to consider this seminal artist's relationship to the history of art and architecture, both of which are critical currents within his multivalent practice.

By installing Förg’s artworks—broadly adhering to modernist traditions—against the ornamental interiors and Renaissance architecture of Palazzo Contarini Polignac, the exhibition will dissect and discuss the legacy of aesthetic modernism, an ideal central to Förg’s practice, in a space replete with history and craftsmanship. Rather than a formal exhibition, the presentation is designed as an atmospheric staging of works in an intimate, private setting, in order to evoke a romanticism not usually associated with Förg’s oeuvre. By integrating Förg’s rich bodies of work throughout the internal palace rooms, the exhibition demonstrates Förg’s interest in the dialogue between art, architecture and the viewer.

Throughout the Palazzo, individual paintings, tapestries and decorative elements in selected locations are replaced with works by the artist. On the ground floor, a large-scale minimalist painting of a window, Untitled (2004)—as well as several preparatory sketches for the work shown alongside it—stands in lieu of an emblem, creating the impression of a window where there is none. Förg’s ‘windows’, despite their stoic geometry, are provocative—they offer a frame through which to look but provide no view. Instead they direct and constrain our gaze, questioning the act of looking and aesthetics.

In the great hall of the Palazzo, four vibrant Spot Paintings made between 2007 and 2009 are displayed in front of four large wall tapestries. In these abstract, gestural works, horizontal segments of vertically scrawled brush marks remind the viewer of Cy Twombly’s scribbles, but with their different colours on white and light grey primed grounds actually are more akin to a paint palette and the process of wiping clean brushes. While they appear to have been made rapidly, the Spot Paintings are the result of both quick intuition and careful deliberation. Together, the four Spot Paintings in the exhibition give a sense of Förg’s thoughtful and sustained experimentation with different colour relations, paint applications, compositions, and rhythms across this important series. Placed here in front of the Palazzo’s figurative tapestries, which still stick out from underneath, the Spot Paintings with their floating brushmarks and insistently flat surfaces evoke modernist abstraction’s will to autonomy, while however suggesting Förg’s own critically distanced engagement with this pursuit.

In the Palazzo’s impressive mirror hall, a series of Förg’s sculptures from 1990 are installed near the windows. These figurative sculptures, comprising bronze masks sitting on rough plywood plinths, test the possibilities and limitations of material. The gauged, rapidly-worked surfaces imply destruction. They are deliberately imperfect, highlighting Förg’s interest in exploring an idea, more than in achieving an ideal of aesthetic pleasure and perfection. The palpable surfaces are smattered with Förg’s fingerprints, chance circumstances and material accidents, pushing bronze far beyond its hierarchical, classical and monumental associations.

Finally, on view throughout the Palazzo’s furnished side rooms, a number of Förg’s abstract paintings from the 1980s and 1990s replace the art usually on view. Taken together, the works in the exhibition showcase the breadth of Förg’s career and reveal his tendency towards experimentation, drawing together the various strands and conceptual influences that ran through his oeuvre—from his nimble execution, tonal complexity and compositional layering, to a sensual, free handling of formal disciplines and geometric structures.

Förg in Venice is presented with support from the artist’s estate and Hauser & Wirth. 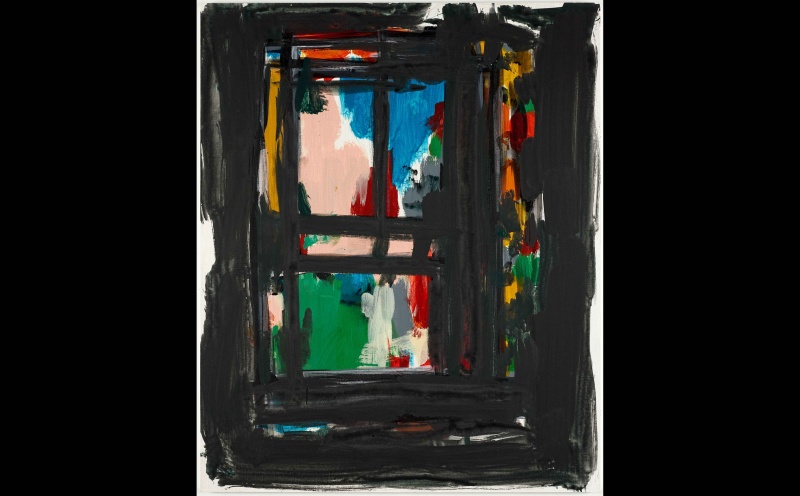