The Design Trust for Public Space and the New York City Department of Small Business Services (SBS) announce the launch of a new initiative designed to help New York City activate its public spaces in support of long-term resilience and economic recovery. Supported by a $125,000 grant from SBS, Neighborhood Commons: Plazas, Sidewalks, and Beyond aims to generate new strategies for how communities can leverage public space to support local economies, commercial corridors, and small businesses, a goal that has become especially critical as many recover from the impact of COVID-19. Neighborhood Commons builds on the Design Trust’s mission to serve as an advocate and thought-leader for NYC’s public spaces.

The initiative is being jointly led by the Design Trust and SBS in consultation with an Advisory Board of leaders from public and private sector groups, including the Association for a Better New York, Bronx Night Market, Center for an Urban Future, Merchants of Third Avenue Bay Ridge, NYC Department of Transportation, NYC Mayor's Office for People with Disabilities, Street Vendor Project, and Women’s Housing and Economic Development Corporation, among others. The project will be developed and implemented by four newly appointed Design Trust fellows, professionals in the fields of urban policy, design, engagement, and communications. Applications are being accepted through early December, and appointments will be announced subsequently.

“We’re launching Neighborhood Commons at a critical time for the city’s economic and social health, examining how public space can help small business to thrive, and can be key civic anchors for their communities,” said Design Trust Executive Director Matthew Clarke. “For over 25 years, the Design Trust has elevated the critical role of public space in the livelihood of our neighborhoods. As the impact of the pandemic continues to be felt by local economies, Neighborhood Commons is a timely initiative that will support NYC’s economic recovery and the businesses that anchor its communities.”

Over the course of the initiative, which is expected to run until 2022, the project team will work with Business Improvement Districts (BIDs), Community Based Organizations (CBOs), the Department of Transportation’s NYC Plaza Program, and neighborhood establishments to improve current models of stewardship of public space, including pedestrian plazas, outdoor dining and sidewalk cafes, streets, and spaces made publicly accessible through citywide programs. The team will produce new research on ways NYC can reshape its approach to the management of public spaces located in the right-of-way, and how different models of local governance can impact outcomes. It will plan and implement a series of programmatic activations in public spaces and develop a toolkit that stewards of public space can use to engage neighborhood businesses in overseeing these shared areas.

“Innovation is key when envisioning how New York City communities manage public spaces for long-term resilience and recovery. The Design Trust for Public Space, a Neighborhood 360 Strategic Impact grantee, leads by example with the launch of the new initiative, Neighborhood Commons,” said Jonnel Doris, Commissioner of the NYC Department of Small Business Services. “We are excited for this partnership and look forward to seeing the impact on local communities.”

“During the pandemic, New York City has found creative ways to rethink and reshape how we use public space, allowing us to keep thousands of small businesses afloat and support neighborhoods,” said Polly Trottenberg, Commissioner of the NYC Department of Transportation. “Open Streets, Open Restaurants, and Open Storefronts have together shown just how vital public space is to keeping our city thriving. With special thanks to the Design Trust for Public Space, we now look forward to continuing this innovation approach by being part of the Neighborhood Commons initiative with our partners at the Department of Small Business Services.”

Neighborhood Commons builds on research conducted during a workshop on public plaza stewardship hosted in 2018 by the Design Trust in collaboration with the Neighborhood Plaza Program (NPP) at the Horticultural Society of New York and Uptown Grand Central. 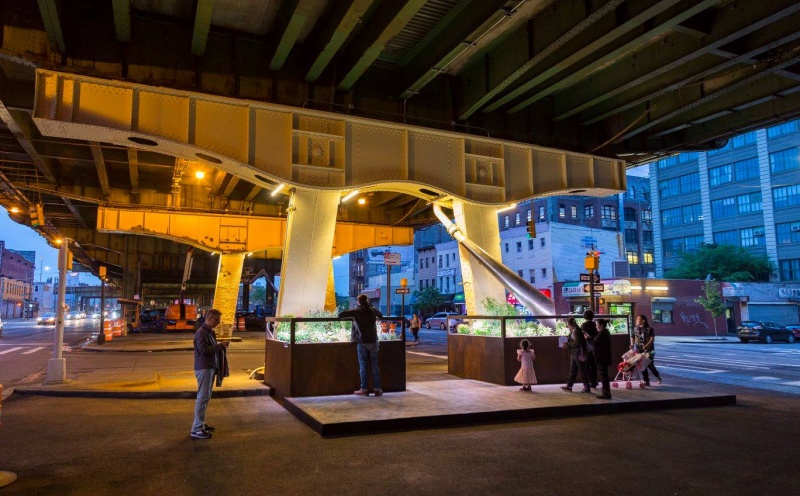