Dia Breaks Ground on Upgrade and Expansion of Dia:Chelsea This Spring As Part of Multiyear Plan to Revitalize Its Constellation of Sites in New York

Dia Art Foundation breaks ground this month on the upgrade and expansion of Dia:Chelsea, creating a unified, naturally lit facility on West 22nd Street in New York City, scheduled to reopen in fall 2020. Designed by Architecture Research Office (ARO), the 32,500-square-foot project, with 20,000 square feet of integrated, street-level exhibition and programming space, integrates Dia’s three contiguous buildings in Chelsea to support a more cohesive visitor experience with expanded street-level galleries for exhibitions, a new flexible space for public and educational programs, the return of Dia’s bookstore to Chelsea, and the extension of Joseph Beuys’s 7000 Eichen (7000 Oaks, which was inaugurated at Documenta in 1982) along the street. Continuing Dia’s history of repurposing and revitalizing existing buildings, the design respects the character and vernacular of the Chelsea neighborhood that Dia has been a part of since the 1980s.

The renovation in Chelsea is part of a comprehensive multiyear campaign to advance Dia’s mission, program, resources, and facilities. Alongside the renovation of Dia:Chelsea, the project encompasses: the launch of Dia:SoHo (a 2,500-square-foot exhibition space at 77 Wooster Street) and simultaneous revitalization of two adjacent, landmark installations by Walter De Maria; the restoration and expansion of the lower level and exterior landscape of Dia:Beacon; and the strengthening of Dia’s endowment, supporting operations across all sites and the growth and conservation of its collection. Dia is working with ARO on all of its forthcoming building projects.

Dia has raised more than $72 million to date in support of this comprehensive initiative, the largest component of which will be invested in its endowment. The endowment will help to support the foundation’s constellation of sites, the majority of which are free to the public. Due to the success of the campaign, Dia will be increasing its overarching goal from $80 million to $90 million in order to support a greater endowment contribution and an expanded scope of work at Dia:Beacon.

“Dia’s physical architecture and curatorial frameworks have always been designed in deference to the art we present and the artistic experience. We are proud to be building on this legacy with a multifaceted and multiyear initiative that is simultaneously modest in design and ambitious in program,” said Jessica Morgan, Dia’s Nathalie de Gunzburg Director. “As long-time residents of Chelsea, it is important to us that any architectural intervention is in keeping with the character and history of the neighborhood. Working closely with ARO, our building plans for Dia:Chelsea extend Dia’s pioneering history of transforming industrial spaces into dynamic galleries for contemporary art, while demonstrating restraint and respect for the architectural vernacular. These plans, along with our plans for our sites in SoHo and Beacon, also add significantly to a series of recent initiatives that Dia has undertaken to reaffirm and reinvigorate our founding vision and principles, ensuring a thoughtful expansion of our collection and commissioning program and the ongoing stewardship of the constellation of artist sites, installations, and gallery spaces that make up Dia.”

Honoring the character of the formerly industrial neighborhood, the design for Dia:Chelsea respects the integrity of the original spatial and material qualities of Dia’s three buildings on West 22nd Street, which includes a six-story building and two contiguous one-story buildings. A new brickwork facade will extend across the three buildings, preserving each as a distinct element within the unified composition, and creating an extended, 200-foot-long facade at street level. The project also sustains high levels of natural light in the galleries by retaining and upgrading the extensive banks of skylights within the buildings. “Based on our close collaboration with Dia, our design offers functional flexibility—with expanded public space at street level and new administrative offices and educational space upstairs,” said Kim Yao, principal of ARO.

Visitors will enter Dia:Chelsea through glass doors into a newly renovated lobby that will include a new bookstore and reading room with views of the street, as well as flexible public program space that can accommodate up to 150 people. The top two floors of the building will include new educational facilities as well as administrative and curatorial offices. On the street level, Dia will add two pairs of elements to Beuys’s iconic 7000 Oaks (a series of basalt stone columns paired with trees placed along West 22nd Street from 10th to 11th Avenue), extending the green canopy provided by this seminal work. This will increase the work’s total number of stone and tree pairings in the city to 39.

The two exhibition spaces will be connected to the lobby by staggered doorways that cut through their adjoining walls. The interior of each building is designed to reveal its structure and to maximize use of the space. The first gallery, located in a former marble factory, will retain its exposed brick walls and will reference its original, industrial garage gate with an oversized metal-panel door that retracts upward to open the gallery to the street, enabling the handling and installation of large-scale work within the gallery, as well as offering the opportunity for street-facing performance and installations. The adjoining second gallery space will retain its distinctive vaulted, wooden roof, its white walls, and its tall glass doors. In each exhibition space, newly upgraded and insulated skylights—matching their original designs—will allow natural light to enter the galleries. Each gallery will be be upgraded to include new HVAC systems and discretely integrated infrastructure for lighting and audio-visual systems to support Dia’s programming.

“The renovation and expansion of Dia’s Chelsea galleries unifies and integrates the incredible architectural assets innate to Dia. Our design honors the vernacular of each structure and of the neighborhood itself, while creating a seamless experience for the visitor in rejuvenated, light-filled spaces. Through stabilization, conservation, and revitalization of each structure, as well as the addition of new infrastructure and building systems, the design pays homage to the history of the buildings and ensures the ongoing vibrancy of future programs here in Chelsea,” said Adam Yarinsky, principal of ARO.

Following the revitalization of Dia:Chelsea, Dia will continue to work with ARO to upgrade and renovate its other sites and programmatic spaces in New York. This includes:

• The launch of Dia:SoHo—a 2,500-square-foot gallery space at 77 Wooster Street, for artist projects, collection displays, and exhibitions. Historically one of Dia’s original galleries in New York City, the space will serve as a new gallery space and critical hub for two adjacent artist sites—The New York Earth Room and The Broken Kilometer by Walter De Maria. The galleries housing these works, which were installed in 1977 and 1979 respectively, will be upgraded with new infrastructure and HVAC systems, enabling both sites to remain open year-round. Restoration work on the De Maria sites will begin in spring 2021, and both will reopen to coincide with the opening of Dia:SoHo in fall 2022.

• The upgrade and expansion of the lower-level galleries at Dia:Beacon—adding 11,000 square feet of new exhibition space within the existing envelope of the building, as well as improving art and archive storage, introducing an archival research space, and establishing new lighting and HVAC systems. The project will additionally include restoration of the exterior facade and landscaping of the land at the back of the building, enabling access for Dia’s visitors to the surrounding green space. Facade restoration began in 2018 and the planned work will proceed in phases over the next five years.

Led by Stephen Cassell, Kim Yao, and Adam Yarinsky, Architecture Research Office (ARO) has worked with leading universities, cultural institutions, global corporations, government agencies, and international fashion labels on projects spanning strategic planning to architecture to urban design. Research and analysis drive ARO’s design practice, which unites the conceptual and the pragmatic within a strong, coherent vision. Recent and ongoing projects include the Flea Theater, Judd Foundation’s 101 Spring Street, the Rothko Chapel, and the Vilcek Foundation. Established in 1993 and based in New York City, the firm received the 2011 National Design Award for Architecture from the Cooper Hewitt, Smithsonian Design Museum. 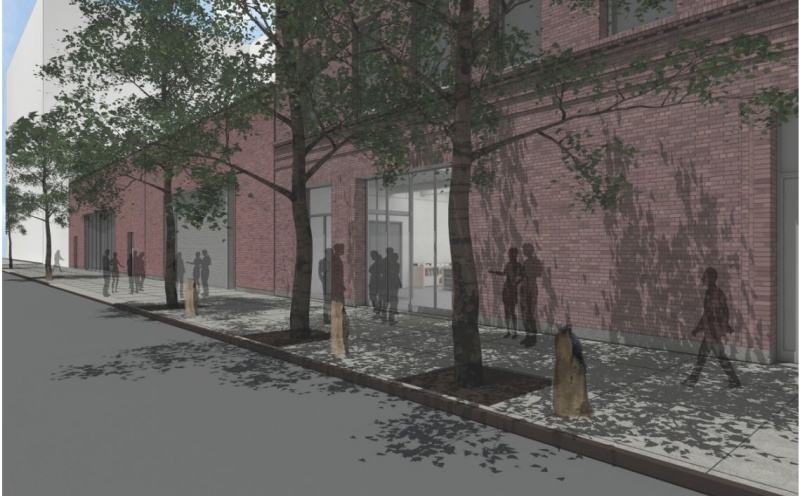