Jackson Pollock: Blind Spots Is Only the Third Major U.S. Museum Exhibition to Focus Solely on the Artist

On November 20, the Dallas Museum of Art will present what experts have deemed a “once in a lifetime” exhibition, organized by the DMA’s Hoffman Family Senior Curator of Contemporary Art Gavin Delahunty: the largest survey of Jackson Pollock’s black paintings ever assembled.

This exceptional presentation will include many works that have not been exhibited for more than 50 years, several of which were considered lost. Jackson Pollock: Blind Spots offers critical new scholarship on this understudied yet pivotal period in the artist’s career and provides radical new insights into Pollock’s practice. On view at the DMA through March 20, 2016, the exhibition will receive its sole US presentation in Dallas, with more than 70 works, including paintings, sculptures, drawings, and prints.

Jackson Pollock: Blind Spots is the first large-scale exhibition to be curated by Gavin Delahunty at the DMA since he joined the Museum in May 2014. The exhibition is co-organized with Tate Liverpool, where Delahunty previously served as Head of Exhibitions and Displays. Tate Liverpool opened a smaller version of the exhibition in June.

The exhibition will first introduce audiences to Pollock’s work via a selection of his classic drip paintings made between 1947 and 1950, including Number 2, 1950, a work from the Harvard Art Museums’ collection that has not traveled in over 20 years. These works will serve to contextualize the radical departure represented by the black paintings, a series of black enamel paintings that Pollock created between 1951 and 1953. An unprecedented 31 black paintings will be included in the DMA presentation, nearly double the next largest survey of these works (which was presented at the Museum of Modern Art in 1967).

“While several of Jackson Pollock’s contemporaries combined black and white, his black paintings were exceptional in their absolute merging of color and surface, which went over and above what Pollock himself had previously achieved; this is a crucial difference for many contemporary artists revisiting Pollock’s work today,” said Delahunty. “Through a comprehensive display of more than 70 works, the exhibition offers the opportunity to address ‘blind spots’ in the current understanding of the artist’s practice, offering a new perspective on his lasting contributions to post-war and contemporary art.

“As one of the first American museums to acquire Pollock’s work, it only is fitting that the DMA should present this definitive exhibition of the black paintings, engaging a new generation of audiences with this important and under-examined aspect of the artist’s practice,” Delahunty concluded.

The Dallas Museum of Art acquired Pollock’s 1947 painting Cathedral, included in the exhibition, in 1950; it was the first of Pollock’s “classic period” paintings to enter any museum collection in the world. In 1967 the DMA acquired a second Pollock work, his 1953 Portrait and a Dream, which is widely considered to be one of his last major artistic statements.

Also featured in the exhibition are 30 works on paper made by Pollock during the same period as the black paintings. Made with enamel and ink and watercolor, the works on paper are considered by scholars to be the artist’s most important as a draftsman. The exhibition will also feature five of Pollock’s extant six sculptures, which provide a true three-dimensional experience of his well-known painting approach. Together with the 37 paintings on view, these works immersive audiences in Pollock’s complete oeuvre and shed new light on the experimentation and ingenuity that has become synonymous with his practice.

While Jackson Pollock’s leading role in the Abstract Expressionist movement has been widely discussed, less attention has been devoted to his black paintings period. In describing this pivotal phase in Pollock’s artistic trajectory, the critic and historian Michael Fried remarked that “[Pollock is] on the verge of an entirely new and different kind of painting . . . of virtually limitless potential.” The black paintings assembled for the exhibition will include significant loans from U.S., Asian, and European collections, as well as important works drawn from the collections of the DMA and Tate.

“Pollock's extraordinary, still controversial black paintings of 1951 finally get the attention they deserve; they prove to be just as radical as his earlier, more celebrated all-over drip paintings, and speak even more to our own time as well,” said John Elderfield, Chief Curator Emeritus of Painting and Sculpture, Museum of Modern Art. 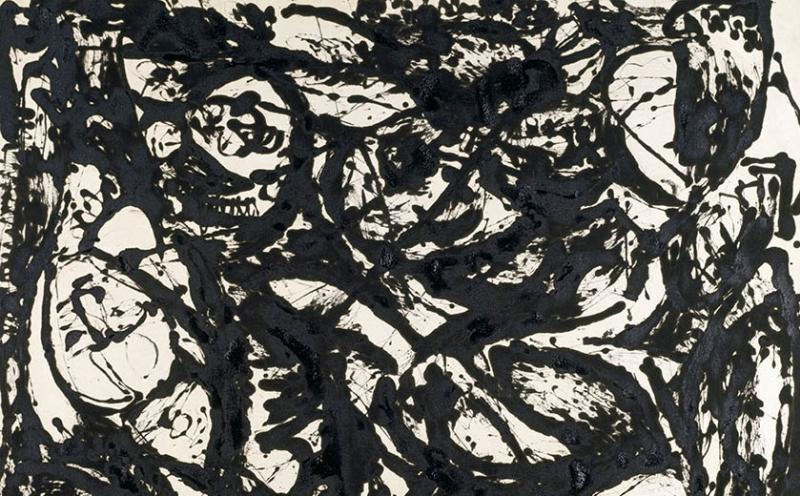