Charlotte Posenenske: Work in Progress charts the evolution of the influential yet underrecognized artist, spanning the entirety of her artistic practice

[Updated March 4, 2019] The first North American retrospective dedicated to German artist Charlotte Posenenske (1930–1985) premieres this spring at Dia:Beacon in Beacon, New York. Marking the most comprehensive exploration of the artist’s work since her death, Charlotte Posenenske: Work in Progress highlights the entirety of Posenenske’s intensely productive twelve-year practice, before she turned away from making art to study the sociology of labor. Spanning her earliest experiments with mark making and drawing, to her transitional wall reliefs, to her final modular sculptural projects, the exhibition includes original prototypes for her sculptures as well as more than 150 newly fabricated elements. These works are on view at Dia:Beacon in site-responsive displays from March 8 to September 9, 2019.

In conjunction with the exhibition, Dia announced the acquisition of 155 sculptural elements from four series designed by Posenenske during the final two years of her practice (1967–68). On view as part of Charlotte Posenenske: Work in Progress, these acquisitions include: elements from Reliefs Serie B and C (Reliefs Series B and C), which are monochromatically arched, folded, and/or canted shapes that can be mounted on the wall or placed on the floor; and units of Vierkantrohre Serie D and DW (Square Tubes Series D and DW), which evoke industrial ventilation systems, built from galvanized steel and cardboard, respectively. The remarkable size of the acquisition is the largest by a museum to date and reflects Dia’s commitment to collecting artists’ works in depth, enabling thoughtful and sustained consideration of an artist’s practice.

Dia’s acquisitions of Series B, C, D, and DW elements are displayed alongside several of Posenenske’s Drehflügel Serie E (Revolving Vanes Series E) objects, which have hinged sides that move and rotate. The exhibition includes historic Series E prototypes as well as recently produced examples from this body of work. While the historic objects are too fragile to spontaneously interact with, viewers are invited to manipulate the newly fabricated elements. Working in close collaboration with the artist’s estate, Dia also presents, for the first time, one of the Series E “partitions” that Posenenske envisioned in 1968 but was unable to realize for technical reasons. Scaled to the architecture of the gallery in which they are presented, the partitions function as mutable walls and barriers. These sculptures become sites of social interaction and play as visitors negotiate the panel positions.

The open-ended variability of Posenenske’s serial work will also be conveyed through two reconfigurations of the modular Series D elements during the course of the exhibition. In the spirit of Posenenske’s interest in making art more transparent and democratic viewers will be able to observe this process during open hours on May 20 and August 5, 2019.

“Charlotte Posenenske created an exceptionally innovative body of work within a focused and abbreviated period of time. While she exhibited widely during the years that she was active—alongside peers such as Hanne Darboven, Donald Judd, and Sol LeWitt—her contributions have been largely overlooked and unexamined until now,” said Jessica Morgan, Dia’s Nathalie de Gunzburg Director. “It is rare to have an opportunity to bring a single artist’s work into our collection in such volume. This major acquisition exemplifies Dia’s unique commitment to sustained engagement with an artist’s practice. Posenenske’s sculptures and serial works add a significant new dimension to Dia’s collection and will enable us to uncover a more diverse and complicated history of Minimalism.”

Active as an artist in Germany between 1956 and 1968, Posenenske created works that were in dialogue with international movements of the time, ranging from Art Informel and Group Zero, to Minimal and Conceptual art. Up until 1967, Posenenske participated in important international one-person and group shows in galleries and museums. By 1968, she turned toward public spaces for displaying her sculptures. During the politically tumultuous May of that year, she published a statement in Art International that acknowledged: “it is difficult to come to terms with the fact that art can contribute nothing to the solution of pressing social problems.” She henceforth ceased making and exhibiting art and dedicated herself to the study of sociology. Nevertheless, Posenenske left behind a radical body of work that continues to challenge and generate new ideas about how works of art are authored, experienced and valued.

Early in her career, Posenenske developed experimental techniques for applying color and line to paper and board that procedurally recorded her gestural marks. These were articulated first in abstract drawings and paintings, then in spray-painted wall structures at the threshold between painting and sculpture, and murals animating buildings’ facades. Charlotte Posenenske: Work in Progress includes more than thirty examples of these early works on paper and wall reliefs.

In the last two years of her practice, Posenenske developed five industrially fabricated, mass-produced series of modular, geometric sculptures (Series B, C, D, DW, and E). Minimal in aesthetic, the elements within each series are variously activated by their “consumers”—Posenenke’s term for those who engage with her work—who are invited to creatively assemble the parts into unique combinations of their choosing. Posenenske considered these infinitely permutational and playful sculptures as being collaboratively authored—by the artist who designed them, the workers who fabricated them, and the consumers who combined them.

Further setting herself apart from her artist peers who also worked in series and multiples, Posenenske worked in unlimited editions and considered her designs as prototypes for mass production. In this regard, she pointedly addressed socioeconomic concerns of the decade by resisting the call to make rarefied objects as well as by rejecting formal and cultural hierarchies. Industrially produced and individually assembled, these late works explore the polarities of labor in the modern economy.

“Posenenske made critical contributions to the development of serial, site specific, and participatory practices. In entrusting her consumers with the creation of new work through the arrangement of her sculptural elements, Posenenske explored topical questions about the labor of making and the spaces in which this unfolds, which ultimately became the sole focus of her life’s work,” said Alexis Lowry, Associate Curator. “In showcasing the full scope of her practice, the exhibition demonstrates Posenenske as a prescient voice of her time and in art today.”

Charlotte Posenenske (1930–1985) was a German artist and sociologist. Born in Wiesbaden, she formally trained as a painter under Willi Baumeister in Stuttgart during the early 1950s. After briefly working as a costume and set designer in Lübeck and Darmstadt, she focused her attention exclusively on the visual arts, during a period known as the Wirtschaftswunder that rapidly transformed West Germany following the devastations of World War II. Her artistic career was framed between her youth, which was spent under the threat of deportation during the war, and her professional commitment to the sociology of labor from 1968 onward. Posenenske’s work is found in major institutions around the world, including the Centre Pompidou and the Tate. Since her death in 1985, her work has gained renewed attention through presentations at Museum MMK für Moderne Kunst, Frankfurt (1990), Documenta, Kassel (2007), Museum of Modern Art, New York (2009), Artists Space, New York (2010), and São Paulo Biennial (2012).

The exhibition will be accompanied by a fully illustrated hardcover volume published by Dia, with essays by curators Jessica Morgan and Alexis Lowry, art historians Isabelle Malz, Daniel Spaulding, and Catherine Wood, and artist Rita McBride.

An Evening of Screenings in Conjunction with Charlotte Posenenske: Work in Progress

In collaboration with Electronic Arts Intermix

In conjunction with the exhibition Charlotte Posenenske: Work in Progress, Dia presents at Dia:Beacon a month of open discussions, which take Posenenske’s work as a point of departure. Entrusting audiences with the creation of new artworks through the arrangement of her modular sculptures, the artist made critical contributions to the development of serial, site-specific, and participatory practices. In 1968, frustrated by the systemic divide between the art world and the working class, she began studying sociology and repositioned her practice as an advisor in support of labor unions. These Beacon-based sessions invite participants to contribute to a sustained conversation about the labor of making and the spaces in which this unfolds.

Sessions leaders include artists Rey Akdogan and Alan Ruiz, sociologist and labor scholar Stephanie Luce, and architect Diana Mangaser. Each session is free with museum admission and open to the public. Space is limited; reservations are required. 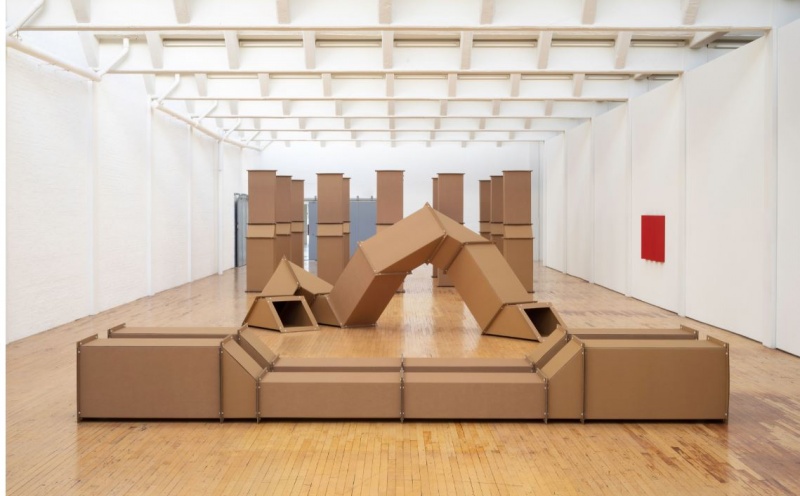