This February, the Institute of Contemporary Art, Miami, presents a comprehensive survey of work by John Miller, marking the first American museum exhibition dedicated to the influential conceptual artist. I Stand, I Fall brings together some 75 works that trace Miller’s use of the figure throughout his career in order to incisively comment on the status of art and life in American culture.

Curated by Deputy Director and Chief Curator Alex Gartenfeld and organized by ICA Miami, the exhibition features a range of media, including painting, sculpture, drawing, photography, installation and video; never-before-seen works from the 1980s; new large-scale sculptures; and the artist’s most ambitious architectural installation to date – a vast and immersive mirrored labyrinth that will go on view in ICA Miami’s Atrium Gallery. The exhibition is on view February 18 through June 12, 2016, with the Atrium Gallery installation on view through May 15, 2016.

“As John Miller’s first solo exhibition at an American museum, I Stand, I Fall advances ICA Miami’s mission to further critical dialogue, promote public engagement, and advance new scholarship on under-recognized contemporary artists,” said Ellen Salpeter, Director of ICA Miami. “Miller’s deep engagement with social and political issues is representative of the museum’s commitment to providing a platform for the critical exchange of art and ideas.”

Miller has long been renowned for his collaborations with Mike Kelley and Jim Shaw, and his relationship to punk music. I Stand, I Fall surveys Miller’s use of the figure in order to examine themes of citizenship and politics, and the conventions of realism in contemporary art. Organized chronologically, the exhibition begins with his drawings and paintings from 1982-1983, the majority of which have never been presented publically. Influenced by the pastoral genre of painting and American social realism of the 1920s and 30s, these deadpan, even grotesque, works explore issues of urban and suburban Americana, public space, and the human relationship to the landscape. Depicting members of the Black Panthers and sit-ins alongside popular and folk imagery, the images are strikingly resonant today.

The exhibition also includes Miller’s iconic monochromatic gold and brown reliefs, composed of dense, animistic arrangements of readymade materials, as well as a wide array of his anthropomorphic sculptures, which include pointed, humorous re-imaginations of globes, mannequins and office furniture. Photographs from the ongoing series The Middle of the Day (1994-present) reveal the source material for many of the artist’s paintings, including his new “pedestrian” paintings and photomural wallpapers, which will also be on view. Shot between the hours of noon and 2:00 p.m., the typical hours of a lunch break, these photographs depict the everyday realities of economics and social class – themes that the artist has innovatively explored for decades.

“Without question, John is among the most influential, thoughtful and political artists of our time, and his output has inspired generations of artists,” said Alex Gartenfeld, ICA Miami’s Deputy Director and Chief Curator. “The exhibition uses the theme of the figure to explore how John has time and again asked pressing questions about the political and social nature of our reality—through beautiful, humorous, and subversive forms.” 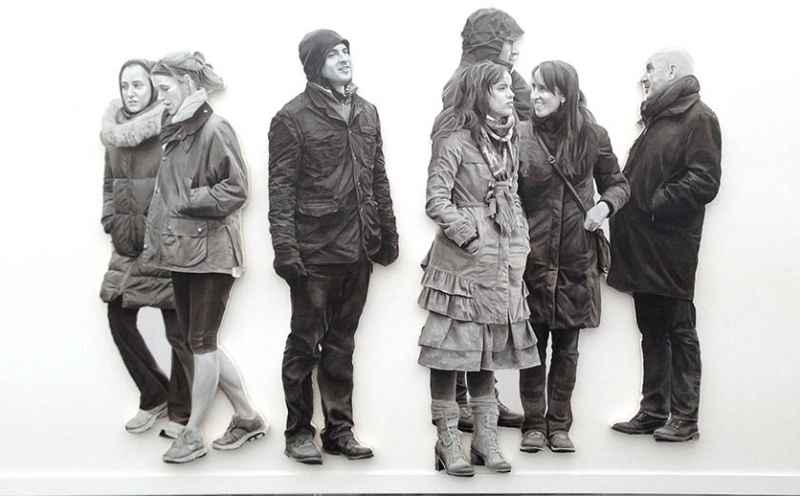