The Institute of Contemporary Art (ICA Miami) presents the first U.S. museum retrospective for legendary American artist Allan McCollum (b. 1944), opening on September 2. Allan McCollum: Works Since 1969 traces the artist’s iconoclastic philosophy on the originality, value, and context of art. While McCollum’s contributions have been the focus of six major museum exhibitions in Europe and his work is included in more than 90 museum collections worldwide, this is the first museum exhibition in the U.S. to survey his 50-year career across a range of media, including painting, sculpture, photography, rarely seen early works and large-scale installations. Curated by ICA Miami Artistic Director Alex Gartenfeld and Curator Stephanie Seidel, Works Since 1969 is on view at ICA Miami through January 17, 2021.

“For decades, Allan McCollum has explored how identity and community are created through collections of objects. In our fractious and digital age, his explorations of regional American culture have never been more timely,” said Alex Gartenfeld, ICA Miami’s Artistic Director. “McCollum’s work is profoundly influential on artists working on the role of the museum in society—yet has been underexplored to date. Our survey builds on ICA Miami’s history of providing the first major U.S. museum platform for artists whose work merits renewed attention and reveals insights about contemporary society and culture.”

Organized chronologically, Works Since 1969 brings together more than more than 20 series that blur the boundaries between mass-produced object and unique, exalted artifact. Some of the artist’s earliest major series, “Bleach Paintings” and “Constructed Paintings”—both begun in 1969—reflect McCollum’s interrogations of art history’s longstanding preoccupation with medium specificity. Not painted in a traditional sense, but instead made from materials widely available in supermarkets and hardware stores, McCollum considers the cultural conventions surrounding painting, fabricated through its context and social significance.

Critiques of originality and value carry through McCollum’s five decades of practice, demonstrated through a range of major series on view in the exhibition. These include his iconic “Surrogate Paintings” (1978– ) and “Plaster Surrogates” (1982– ), wooden wall-mounted reliefs and plaster casts shaped like framed pictures in monochromatic colors, which emphasize the conventions of framed images as a universal sign for anything meaningful and valuable.

Demonstrating the role of scale and repetition in his work, the exhibition additionally presents two of McCollum’s iconic sculptural series, “Perfect Vehicles” (1985– ) and “Over Ten Thousand Individual Works” (1987– ), which consider methods of collecting and the ways artworks accrue visibility, meaning, and value. McCollum also explores the notion of originality through photographic work, reflected in the “Perpetual Photos” (1982- ) series. For McCollum’s ongoing series, “The Shapes Project” (2005– ), he devised a simple numerical system to designate a unique shape for each person on the planet in the year 2050 (a total of 30 billion different shapes) using a simple home computer and Adobe Illustrator. Through this series, McCollum undermines the notion that art, if it is to be of any value, must be rare.

The centerpiece of the exhibition is McCollum’s rarely exhibited “regional projects,” works from the last three decades that explore how artifacts become charged with cultural meaning and how collections of objects and artifacts become agents for self-assurance and self-representation in regional communities. Works on view include The Dog from Pompei (1991), a cast of the famous form preserved as a natural mold in the volcanic ashes of Mount Vesuvius in AD 79; Lost Objects (1991– ), casts of fossilized dinosaur bones; and Natural Copies from the Coal Mines of Central Utah (1994), dinosaur tracks preserved in stone that are, themselves, copies; and THE EVENT: Petrified Lightning from Central Florida (1997) developed together with the International Lightning Research Center in Camp Blanding, Florida.

“By rethinking modes of artistic production and distribution as parts of larger economies of value, McCollum is one of the most influential American artists working today,” said Curator Stephanie Seidel. “Over more than five decades his work has remained timely and effective at challenging aesthetic and material concerns, while critically reflecting on the museum context.” 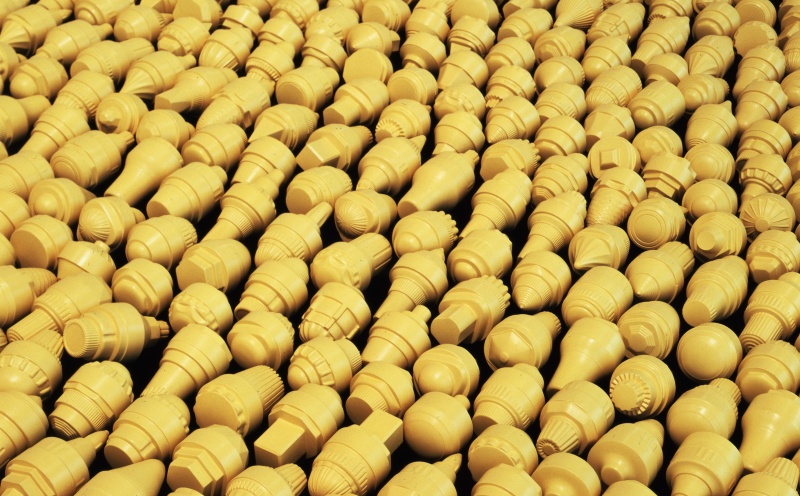