First US Retrospective of Anupam Sud to be presented by the Kiran Nadar Museum of Art in collaboration with DAG, at DAG New York this December

The Kiran Nadar Museum of Art (KNMA) and DAG today announced its presentation of the first U.S. retrospective showcasing the art practice of Anupam Sud, to be presented at DAG New York, spanning over five decades of her prolific practice and featuring her recent works on view for the first time. Curated by Dr. Paula Sengupta, an artist and curator, as well as a student of Sud, The Soul (Un)Gendered: Anupam Sud, A Retrospective encompasses nearly one hundred works across a range of media, including her brilliant etchings, for which the artist is best known, alongside drawings, paintings, collographs and photographs, and explores the journey of one of the most significant and pioneering female artists in India. On view beginning December 11, The Soul (Un)Gendered: Anupam Sud, A Retrospective reflects KNMA and DAG’s commitment to representing the expanse of Indian art practice through the presentation of museum-quality exhibitions globally.

“We are delighted to present the entire corpus of Anupam Sud’s works from the KNMA Collection in The Soul (Un)Gendered: Anupam Sud, A Retrospective,” said Kiran Nadar, Founder and Chairperson of KNMA.  “KNMA in fact has presented retrospectives of significant women artists such as Nasreen Mohamedi, Nalini Malani, Arpita Singh and now Anupam Sud, who have explored distinct trajectories of art making through their practice.”

“A dedicated teacher to innumerable students through the decades, Anupam Sud revitalized the democratic medium of printmaking in India. As an artist par excellence, what we intend to share with the global audience through this collaboration is her brilliant artistic oeuvre, that put to self-scrutiny the deep knowledge of past artistic traditions, of the cultural dynamics that prevail in the Indian context and topical events that trigger her imagination and consciousness.” said Roobina Karode, Director and Chief Curator, KNMA.

“Anupam Sud’s distinct artistic contributions and engagement with issues of her time makes her one of the most significant female artists in India, who has paved the way for generations of artists,” said Ashish Anand, CEO & Managing Director of DAG. “As part of our commitment to advancing appreciation of Indian art internationally, we are pleased to partner with KNMA in bringing the most comprehensive exhibition of Sud’s work to U.S. audiences for the first time and to support new scholarship and understanding of her enduring influence.”

Recognized as one of the foremost printmakers in India, Anupam Sud is a versatile artist whose multidisciplinary practice also spans sculpture and painting. Her work has been distinguished by the revolutionary themes she explored, including male and female sexuality and feminist narratives, which were considered radical subject matter for a female artist in 1960s and 70s in India. Throughout her five decades of practice, Sud has consistently held up a mirror to society—especially in her depiction of male and female relationships—drawing attention to feminist causes and aspects of patriarchy, embodying her consistent commentary on contemporary societal values. Frequently portrayed as stark and exposed nude bodies, the carefully crafted subjects depicted in her prints are often silent figures complicit in acts of intimacy as well as social norms and pressures. In addition to a preoccupation with female imagery, Sud’s work consistently considers spatial relationships through architectural elements, such as windows, niches, and pictorial frames. Melding historic, religious, and mythical references with her personal memories and concerns, Sud’s practice has developed over time into what she has described as her “images of dialogue”—a distinctive style that address her varied perspectives on the society that surrounds her.

The Soul (Un)Gendered: Anupam Sud, A Retrospective brings together almost two hundred works—including drawings, paintings, prints, photographs, illustrated books, sculptures, and archival material, and many works on view for the first time—to trace the evolution of Sud’s groundbreaking practice. The exhibition begins with works from the early phases of Sud’s career—from her origins as the youngest member of Group 8, a printmaking collective founded by her teacher at the College of Art, New Delhi, where she studied in 1967—to works created later during her years stemming from her education at the Slade School of Art in England in 1971, during which she was informed of techniques and practices from both the East and West. The exhibition offers insights on the distinctive and radical elements of the artist’s multi-faceted practice in particular, as well as her sustained contributions to the growth of printmaking in India as a professor at the College of Art, New Delhi. 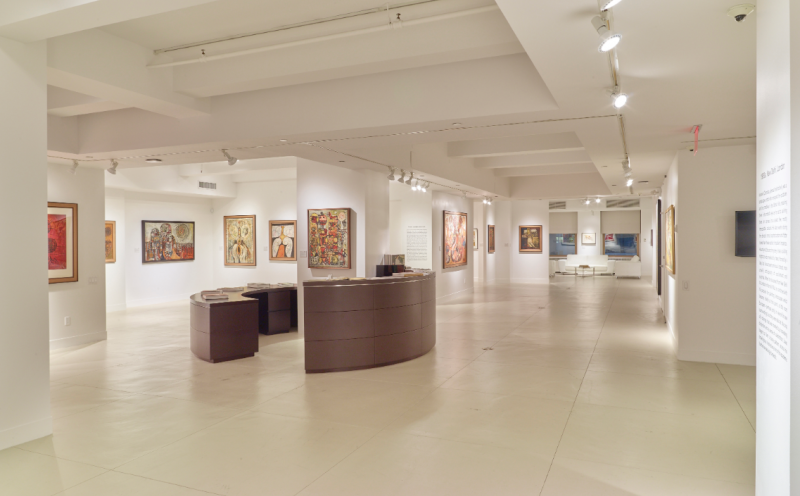