French Fashion, Women, and the First World War—on view at Bard Graduate Center Gallery, 18 West 86th Street, New York City, from September 5, 2019 through January 5, 2020—is an unprecedented examination of the fraught and dynamic relationship between fashion, war, and gender politics in France during World War I. Women mobilized to keep the French economy afloat, as did the clothing industry (the second largest economic driver in France at the time). The fashion press promoted Paris’ leading female designers—Jeanne Paquin, Jeanne Lanvin, and Jenny Sacerdote—intensively. Paquin, Lanvin, and Sacerdote were smart businesswomen prior to 1914, and the war only enhanced their dominance on the international scene. Among Paris’ rising couturiers was Gabrielle Chanel, whose simple, elegant designs helped her rise to prominence during the war and whose jersey skirt suits captured the zeitgeist of this new era.

With its diverse range of clothing and ephemera, from the exquisite to the quotidian, this exhibition brings into sharp focus the relationship between fashion and war, and how fashion reflected social change and became the locus of male anxiety in the face of rapid social upheaval. What role did fashion play in the disjunction between the horrors of the front experienced by French soldiers, resulting in almost 1.5 million dead, and the reality of life in wartime, in which women worked valiantly to provide for their families and contribute to the war effort? Can the endless critical discourse around what women wore, how they wore it, and the anxieties it provoked explain the stilted progress of women’s emancipation in postwar France, where women did not gain the right to vote until 1944?

Through detailed research and loans from major fashion houses and museums, curators Maude Bass-Krueger and Sophie Kurkdjian have amassed a collection of wartime skirt suits, nurses’ and ambulance attendants’ uniforms, mourning dresses, and “militarystyle” hats that will be exhibited alongside fashions by Chanel and Lanvin that are making their first appearance in the United States. In addition, printed documents—postcards, commercial catalogues, fashion magazines, advertising posters, and photographs—that have rarely, if ever, been previously exhibited—will be on view.

Laid out on three floors of Bard Center Gallery, French Fashion, Women, and the First World War is organized in sections that include the pre-war days of 1914, wartime textiles and fashion, French-American fashion cooperation, women at work, nursing, mourning practices, the seamstresses’ strike of 1917, tensions that rose from women’s changing identities, and the question of postwar women’s rights.

Throughout August and September 1914, German troops bombed French factories around Lille, Turcoing, and Roubaix in an attempt to destroy the textile industry. Manufacturers and designers mobilized and worked together to salvage the losses, focusing production on silk textiles made in Lyon, rather than on the wool, cotton, and linen textiles produced in the north. At the same time, Parisian couture houses marketed the new fall silhouette as a “war crinoline” and urged domestic and international buyers and clients to purchase the garment as a way to help the French war effort.

After the first chaotic months of the war had passed, the fashion industry intensified its marketing efforts, focusing on the United States and South America. French designers sent couture models abroad, staged fashion parties in New York City, and presented their designs at the 1915 Panama-Pacific International Exposition in San Francisco, all to ensure that France maintained its position at the pinnacle of worldwide fashion. Alongside photographs and illustrations of garments presented at these “Fêtes Parisiennes” in New York, a Callot Soeurs evening dress in pink silk and metallic thread that was presented at the 1915 San Francisco Exposition will be on view. Publishers such as Lucien Vogel created new magazines to disseminate new styles at home and abroad, helping to accelerate changes in women’s attire introduced before the war, like simplified silhouettes and higher hemlines. The exhibition includes examples of plates and articles from publications such as Les Élégances Parisiennes, Le Style Parisien, Femina, La Gazette du Bon Ton, and Continental Vogue and Vogue UK that reflect this intense shared marketing effort to protect the industry. Indeed, the European editions of Vogue, launched by the American publisher Condé Nast with the explicit purpose of helping the French war effort, featured pro-France cover illustrations such as Georges Lepape’s “Vive la France” (Vogue UK), which will be on view.

With designers like Paul Poiret and Jean Patou off at the front, woman designers such as Gabrielle Chanel, Jeanne Lanvin, and Jeanne Paquin advanced. Wartime fashions by Chanel and Lanvin, among them, two rare examples of early Chanel archives—a silk jersey blouse from 1916 and a hat from Spring–Summer 1917, both of which will be shown in the United States for the first time—reveal how these designers, as well as women of all classes, adapted to wartime conditions. Wartime fashions reflected a new practicality with the rise of the skirt suit, the introduction of pockets, and the use of ‘’sportswear’’ textiles like jersey.

Women’s changing roles necessitated this new practicality. With eight million French men away at the front, women replaced men in many positions. Fearing the advance of women’s suffrage along with a host of other freedoms and expectations, the French government did not provide official uniforms for jobs in the public service. Women wore their own dresses and skirt suits along with armbands or hats to signal their status. Women who went into nursing bought their nurse’s uniforms ready-made or had them tailored according to specifications. One such example of a 1916 U.S. military nurse’s uniform purchased at Parisian department store La Belle Jardinière will be on view. Factory workers initially wore their own garments, until the government finally agreed to allow women to wear work overalls for their own safety. Women’s efforts to wear clothing that was appropriate and safe to work in incited fierce public debate around gender, social class, and emancipation. The exhibition offers rich examples of these uniforms as well as a striking collection of photographs of women who have styled themselves for their work as letter carriers, chimney sweeps, tramway drivers, and other positions traditionally held by men.

Fashion was a lightning rod for wartime anxiety: soldiers took note of what women wore, commenting even on the black-clad widows. “The tension between the fashionable aspects of mourning dress and the expected behavior of women in mourning was aggravated by the war,” according to Maude Bass- Krueger, “as mourning etiquette was forced to simplify during the war, men feared that women would forget them or replace them too quickly.” Satirical magazines and trench newspapers caricatured women’s fashions for being either too frivolous or too “masculine.” Postcards sent back and forth from the home front to the trenches heightened the contrast between the two worlds. Unlike the caricatures, which contrast the fashionability of women at home against the misery of the French soldier, one of the most popular genres of postcards depicted a strikingly different kind of woman: simply dressed and patiently waiting for her soldier to arrive, this “good” woman wrote letters and dreamt about her absent lover. A fascinating collection of these postcards, revealing the horrors and loneliness soldiers faced at the front as well as their intense longing for the companionship of women, will be on view.

In addition to the carefully selected garments and the range of documentation on view, French Fashion, Women, and the First World War provides rich contextual material illustrating tensions within the couture industry during the period, notably the major strike of 1917 by fashion house workers; the idealization and criticism of nurses and their uniforms; changes in mourning etiquette; the efforts of the couturiers, during wartime disorder, to protect and promote their interests abroad; and the suffrage movement, which advanced in the United States and Britain immediately following 1918, but stalled in France, where women did not gain the right to vote until 1944. 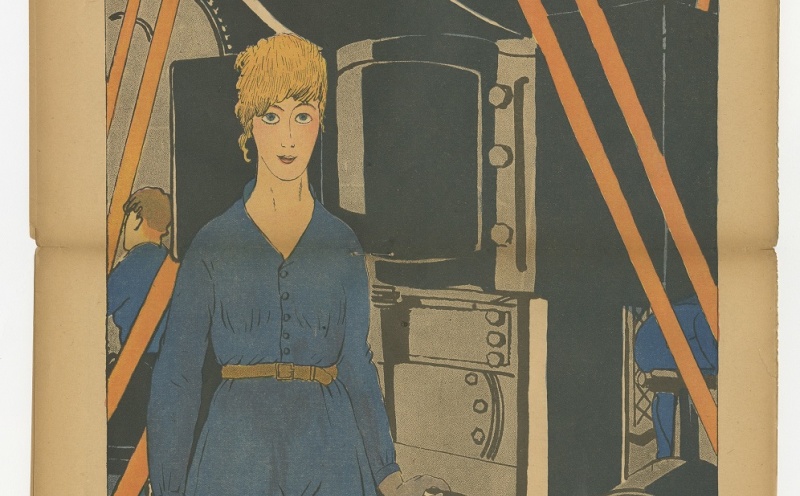