Co-curators Gonzalez and Tompkins Rivas said: ‘For the second edition of Frieze Projects we wanted to globalize the selection of artists, while thinking in particular about Los Angeles’ relationship to the Americas. Many of the works draw on the political context within which we are operating today. Latinx and Latin American art and histories are put into focus with projects by Tania Candiani and Gabriella Sanchez, while works by Gary Simmons and Lorna Simpson touch on themes of visibility, identity and self-fashioning in relation to the African American experience. Another idea was to bring in artists, such as Vincent Ramos and Channing Hansen to work within the archive and legacy of Paramount Pictures Studios, deepening the program’s conversation with its filmset location.’

Presented by Karma and David Kordansky

A series of bronze sculptures reconfiguring metal die-cast toys to create new narratives and associations, while evoking a sense of nostalgia.

A performative installation exploring technology and labor, drawing correlations between the forced work of Japanese Americans incarcerated in concentration camps in California during WWII and current migrant detentions camps along the US/Mexico border.

A collective performance which uses dance as a restorative act to reclaim time, space and emotional energy.

A video work taking an intimate look inside people’s wallets and their contents, providing a broad portrayal of people living in Brazil across gender, race and class.

A new sculpture of a palm tree cell phone tower, shining light on the ways in which Hollywood’s stagecraft has spread to urban planning.

A site-specific, fiber-based installation with a durational performance drawing inspiration from both Duchamp and episodes of Star Trek.

Huffman’s first outdoor sculpture appropriates elements of cinematic visual culture and pays homage to Grace Jones in A View to a Kill.

Presented by Hannah Hoffman and Bortolami

Kasten gives a new life to Intervention, a sculptural installation that evokes the backdrops of pictorial and filmic production while echoing the Bauhaus and Constructivism.

A site-specific installation investigating both the absence and presence of the Mexican and Mexican-American / Chicano experience within Hollywood film production, specifically through the movies produced by the fair’s host, Paramount Pictures.

Playing with language and imagery, Sanchez’s banner and other pieces engaging with signage on the backlot, reference Chicanx and barrio culture, notions of masculinity, and layered meanings through text.

A restaging of the artist’s historic work Backdrop Project first shown at Metro Pictures, New York in 1993. By taking Polaroids of passers-by and offering a copy to his subjects, Simmons explored the power of self-fashioning and authorship.

Simpson collaborates with a group of African American ballet dancers on a two-channel video, addressing issues of gender, identity, memory and representation.

A neon sculpture exposing the power of Hollywood’s constructed narratives in our contemporary life, while resonating with timely political issues.

A video and installation weaving together a 1981 incident in which Muhammad Ali talked a suicidal jumper off the ledge of a building in LA with the 1983 hit Jump by Van Halen.

A performative installation with related photographs that co-opts and upends the guitar solo through a conjoining and doubling. Using two guitars grafted together, Tsabar and a partner turn the performative gesture into an act based on intimacy and cooperation. 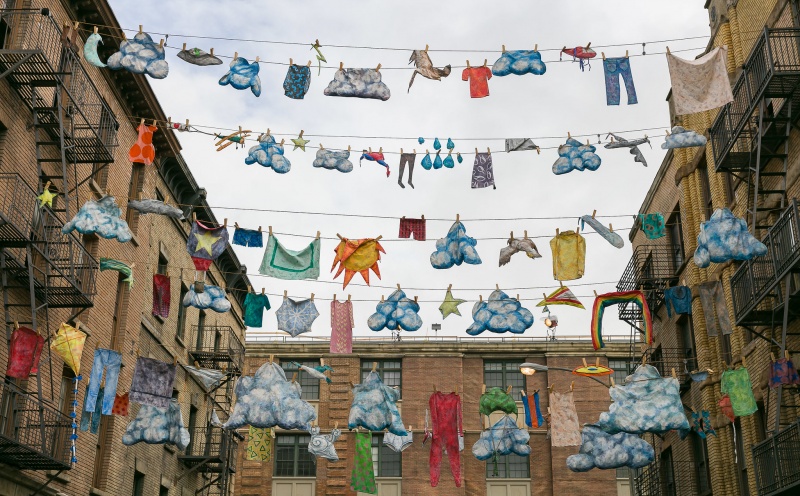