Image of a Champion Features Many Works Never Before Published

The charismatic and controversial American heavyweight champion Muhammad Ali, as photographed by Gordon Parks, is the subject of an exhibition that opens at The Nelson-Atkins Museum of Art in Kansas City Feb. 14, 2020 and runs through July 5. Gordon Parks x Muhammad Ali: The Image of a Champion, 1966/1970 was organized by the Nelson-Atkins in collaboration with The Gordon Parks Foundation and features approximately 55 photographs Parks took of Ali while on assignment for Life magazine. In conjunction with the exhibition, the museum has recently acquired approximately 13 works, including selections from the American Champion portfolio, which will be on view.

“Gordon Parks and Muhammad Ali were highly celebrated and influential cultural figures,” said Julián Zugazagoitia, Menefee D. and Mary Louise Blackwell CEO & Director of the Nelson-Atkins. “Though they had different generational experiences, both men struggled against bigotry and prejudice in their fight for social justice and civil rights, and they both had a keen understanding of the media’s power to shape public opinion.”

The photographs in the exhibition derive from two in-depth assignments for Life, the first in 1966, and the second in 1970. Image of a Champion emphasizes the way Parks (1912-2006) and Ali (1942-2016) came together for these projects, transcending their roles as photographer and athlete to shape a sympathetic public image of the young champion during this tumultuous period in Ali’s career. The majority of works in the exhibition were never originally published.

“Parks met Ali at a controversial moment, when the young champion’s public image was in tatters,” said April M. Watson, Photography Curator at the Nelson-Atkins and curator of the exhibition. “Ali’s affiliation with the Nation of Islam, and his public statements against the Vietnam War, did not sit well with many Americans. Parks himself was uncertain of Ali when they first met. Through these Life assignments, however, Parks grew to trust and respect the young fighter, understanding they shared a similar challenge as highly visible public figures.”

Parks’ esteemed position at Life gave him a vast influential platform. Parks had priveleged access and pictured Ali in unguarded moments, devoid of the chicanery or bravado that had come to define his public persona. He photographed Ali as he trained in Miami and London for an overseas fight against Henry Cooper, meeting with fans, practicing his religion and navigating throngs of reporters. Many of Parks’ photographs suggest a meta-awareness of the media’s fascination with Ali, who was himself a master of media hype.

In 1970, as Ali was exiting the crisis that had occasioned their first Life story, Parks took photographs for a second assignment that heralded the fighter’s return to the ring after a three-and-a-half-year exile from professional boxing. While preparing for an upcoming fight in Atlanta against Jerry Quarry, Parks again spent time with Ali as he trained in Miami and greeted young fans. This cover feature, as distinguished from the 1966 essay, was aimed less at “redeeming” the champion in words and pictures than picturing the strength and enduring charisma Ali exuded as he prepared to return to the sport he loved.

The Muhammad Ali portrayed in Parks’ photographs in 1966 and 1970—the athlete, private man, controversial figure of politics and religion, and cultural icon—was, it later emerged, standing at an important crossroads in his own inspiring evolution. Parks’ photographs capture this important early chapter in the life of the fighter we still call “the greatest of all time” as he confronted his challenges, inside and outside the ring.

This exhibition will be accompanied by the publication Gordon Parks x Muhammad Ali, published in collaboration with the Gordon Parks Foundation and printed by Steidl. The book includes a foreword by Julián Zugazagoitia and Peter W. Kunhardt, Jr.; and essays by Kareem Abdul-Jabbar, April M. Watson, and Gerald Early. 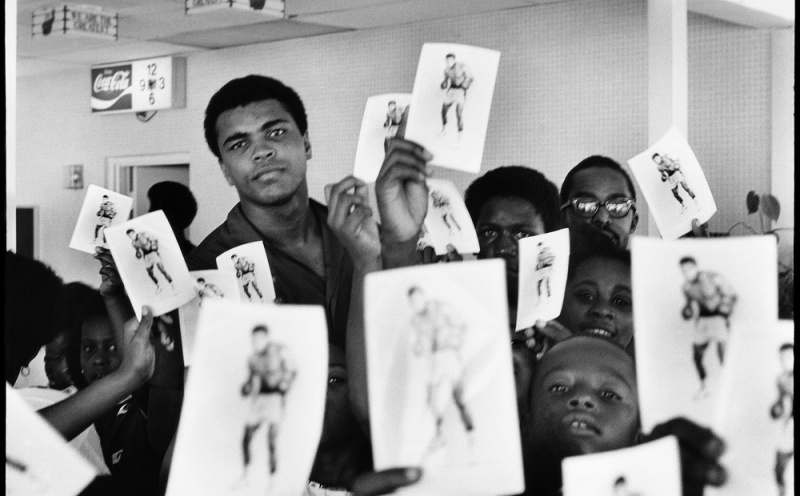