Premiering at the High this spring, the exhibition features powerful paintings and works on paper spanning seven decades of his illustrious career

The High Museum of Art announces today its co-organization of the exhibition “David Driskell: Icons of Nature and History,” celebrating the breadth of the renowned American artist’s oeuvre and marking the first major survey of his work since his death in April 2020. Driskell (1931-2020) is recognized for his painting and printmaking practices, often characterized by the use of collage, which combined the Black American experience with his keen observations of the American landscape and the imagery and aesthetic innovations of the African diaspora. In partnership with Portland Museum of Art, Maine, the exhibition will bring approximately 60 artworks together to present highlights of Driskell’s career. It will debut at the High (Feb. 6-May 9, 2021) and travel to the Portland Museum of Art (June 19-Sept. 12, 2021) and The Phillips Collection (Oct. 6, 2021-Jan. 9, 2022).

“Beyond David’s prolific career as an international artist and scholar, he was a dear friend of the Museum, in fact a life trustee.  Without question, his work, as well as his generosity of spirit and intellect, have been transformational for the field,” said Rand Suffolk, the High’s Nancy and Holcombe T. Green, Jr., director. “We are honored to celebrate his incredible legacy through this exhibition.” Mark Bessire, the Judy and Leonard Lauder director of the Portland Museum of Art, added, “This exhibition is a unique opportunity to gain a deeper understanding and appreciation of David’s widespread influence. The contemporary significance of subjects that David explored throughout his career are more salient than ever, and we are looking forward to highlighting this remarkable American artist.”

The High has a long history of collaboration with Driskell, who in addition to his work as an artist was one of the world’s leading authorities on the history of African American art. In 1977, the High hosted Driskell’s landmark exhibition “Two Centuries of Black American Art.” In 2005, the Museum established the David C. Driskell Prize, the first national award to honor and celebrate contributions to the field of African American art, including distinctions for both artists and scholars. The most recent recipient is artist Jamal Cyrus, with past honorees including Amy Sherald, Naima J. Keith, Mark Bradford, Andrea Barnwell Brownlee, Rashid Johnson and Valerie Cassel Oliver. Funds raised through the prize’s annual dinner have supported the acquisition of 48 works by African American artists for the High’s collection.

“What remains steadfast in Driskell’s work is a commitment to his ‘icons,’ which elevate the mind and the spirit above that which exists in the physical world,” said guest curator Julie McGee, associate professor of Africana studies and art history at the University of Delaware. “Among the many gifts Driskell bequeaths to us is the delight of seeing the world through his eyes, and it is a journey of immeasurable beauty and grace.”

Added Michael Rooks, the High’s Wieland Family curator of modern and contemporary art, “Driskell’s command of vibrant color and line, and his attentiveness to what he called ‘the symbolic presence of form,’ endowed his subjects with a kind of frisson like that of an electrical charge, which made his work esthetically vigorous, bold and spirited.”

“Icons of Nature and History” is the first posthumous survey of Driskell’s work, spanning seven decades of his artistry, from the 1950s to the 2000s, with works drawn from museums, private collections and the artist’s estate. The exhibition includes key works from the High’s collection, including one of Driskell’s self-portraits. In addition, the exhibition follows the course of his career, from Howard University and the Skowhegan School of Painting and Sculpture to Talladega College and his studio in Falmouth, Maine, and features recurring motifs such as still lifes, pine trees, aspects of the natural world, African masks, and iconographies drawn from his Christian and Southern roots and the Black experience. Works in the exhibition, including paintings, drawings and prints, will reveal Driskell’s mastery of materials and his indefatigable spirit of invention, which led to the development of a hybrid technique he called “collage-painting.”

“David Driskell: Icons of Nature and History” will be presented on the lobby and second levels of the High’s Anne Cox Chambers Wing.

A Georgia native, Driskell graduated from Howard University in 1955 and received a Master of Fine Arts from The Catholic University of America in 1962. In 1953, he attended the Skowhegan School of Painting and Sculpture in Maine. A lifelong educator, Driskell honed his teaching repertoire at historically Black colleges and universities (HBCUs) between 1955 and 1976, teaching at Talladega College, Howard University and Fisk University. From 1977 through 1998, he taught at the University of Maryland, College Park, which is now the home of the David C. Driskell Center, an exhibition space and research institute that houses Driskell’s archive. In addition to a growing collection of African American art, it serves as a study center for the history of African American art and art of the African diaspora. While Driskell built a distinguished career as a scholar, he simultaneously maintained an active and distinguished artistic practice, regularly presenting his work in both solo and group exhibitions at museums and galleries including the High, the Center for Maine Contemporary Art, The Phillips Collection, Tate Modern (London), DC Moore Gallery and Kunsthal KAde (Amsterdam). 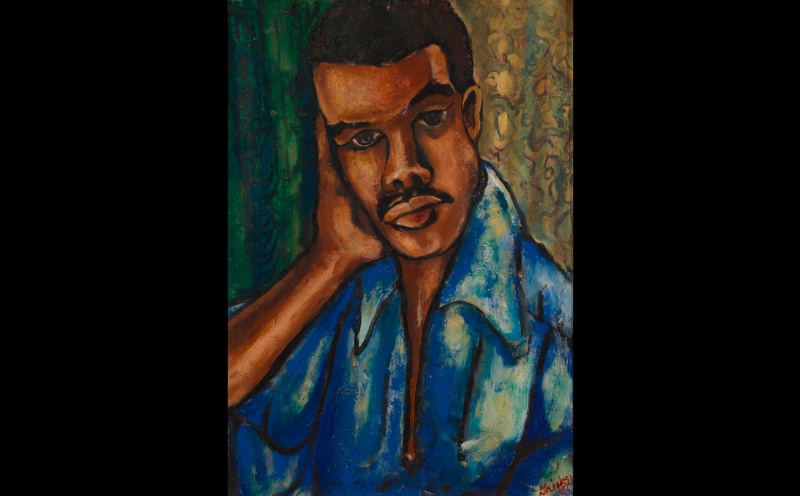