In ancient China, death was believed to be such a continuation of life that burial tombs were plotted as elaborate afterlife arenas, complete with large security forces made of clay, horse-drawn chariots, precious stones and jade figures. Dreams of the Kings: A Jade Suit for Eternity opens Dec. 16 at The Nelson-Atkins Museum of Art in Kansas City and offers a remarkable window into ancient Chinese burial rituals following the discovery of nearly 100 tombs in the mid-20th century onwards in northern Jiangsu Province.

“Humankind’s dream of eternal life is enduring,” said Julián Zugazagoitia, Menefee D. and Mary Louise Blackwell CEO & Director of the Nelson-Atkins. “The finest quality jade suit excavated to date, showcased in this exhibition, along with the other burial objects on display, reveal the dreams of the elegant kings of Chu.”

The centerpiece of Dreams of the Kings is a 2,000-year-old, life-sized jade and gold burial suit, meticulously assembled from more than 4,000 pieces of jade linked together with gold wire. Jade is China’s most precious material and has been exalted in that country since the Neolithic period as having deep spiritual significance associated with the afterlife. It was only during the Han Dynasty (206 B.C.E –220 C.E.) that it was used to completely encase the corpse to reflect the belief that the body would not decay if encased in jade. Jade burial suits were extremely expensive to produce and encouraged tomb looters, prompting a late Han ruler to prohibit jade burial suits. None dating later than Han have ever been found, and the jade suit in this exhibition is the finest to have survived from ancient China.

In 201 B.C.E, the first emperor of the Han Dynasty appointed his younger brother as the first king of the Chu Kingdom, which was centered in what is now Xuzhou, halfway between Beijing and Shanghai. Elites in this kingdom enjoyed a lavish lifestyle, and 12 generations of kings were buried in monumental tombs carved into the rocky hills nearby. The excavation of these tombs yielded an astonishing number of sumptuous objects which are now on view in this exhibition.

“The stunning jades in this exhibition, shown for the first time in the United States, demonstrate why jade is China’s most precious material,” said Colin Mackenzie, Senior Curator of East Asian Art. “Visitors will be amazed by the workmanship and the dramatic ambience of their display in our world-famous Chinese Temple.”

Dreams of the Kings is divided into three sections: Court Ceremony, Feasting, Dance, and Ritual; Warfare and Authority; and Jade for Eternity. The first section displays a remarkable selection of ceramic figures of dancers and musicians, including an elegant, swaying dancer throwing her long sleeves in wild abandon, as well as a huge gilt bronze basin that reflects the importance of personal hygiene in ancient China. Warfare and Authority features a full suit of iron armor, along with miniature versions of the famous Terracotta Warriors, jade sword fittings, and a group of gold, silver and bronze seals of Chu rulers and officials. Jade for Eternity explores the roles of China’s most precious material, particularly jade’s moral symbolism and its efficacy in preserving the body in burial.

A selection of 90 pieces from the museum’s celebrated collection of early Chinese art from the Shang (16th century, ca. 1046 B.C.E.) to the Han (206 B.C.E.–220 C.E.) dynasties will be displayed in adjacent galleries. Included will be the world-famous jade bi ritual disc and many other exceptional pieces. Dreams of the Kings closes April 1, 2018. 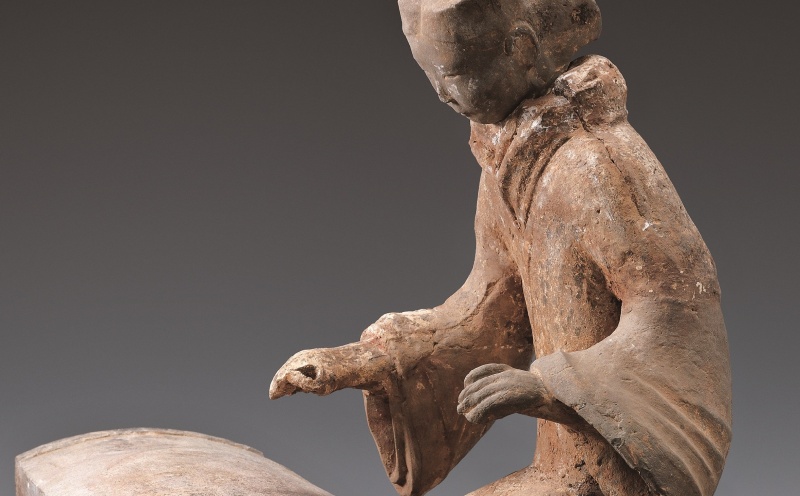 Courtesy The Nelson-Atkins Museum of Art