Kasmin is pleased to announce Sheer Presence: Monumental Paintings by Robert Motherwell, opening March 21, 2019, at the gallery’s flagship space at 509 West 27th Street. This unprecedented exhibition will be the first to focus solely on Motherwell’s approach to large-format painting and will be comprised of eight works spanning the 1960s - 1990, including a core group of paintings from the collection of The Dedalus Foundation. This will be the fourth exhibition on which Kasmin and The Dedalus Foundation have collaborated.

As one of the most novel and confident mark-makers of the Abstract Expressionist era, Motherwell consistently turned to the monumental canvas to pursue his lifelong ambition of realizing “sheer presence, beingness, as such, objectivity and true invention” (R. Motherwell, quoted in an interview with B. Robertson, “Robert Motherwell: Theme and Variations,” ART: New York, broadcast December 15, 1964).

For Motherwell, it was substantial scale that allowed for his intuitive gesturality to become amplified; resulting in paintings that are at once performative, dramatic and imposing. In 1965, Motherwell remarked, “The large format, at one blow, changed the century-long tendency of the French to domesticize modern painting, to make it intimate. We replaced the nude girl and the French door with a modern Stonehenge, with a sense of the sublime and the tragic that had not existed since Goya and Turner” (R. Motherwell, quoted in M. Kozloff, “An Interview With Robert Motherwell,” Artforum, September 1965, p. 37).

The paintings in the exhibition are representative of several major themes explored by Motherwell throughout his career. Dublin, 1916, with Black and Tan, 1963-64, at once alludes to the artist’s continued engagement with social and political ideas, and also reflects his pervading use of large, planar areas of color and spatial ambiguity. Also included in the exhibition is Open No. 97: The Spanish House, 1969, a striking composition from the artist’s seminal Open series. The work displays an expanse of vibrant orange, circumscribed by architectural lines. Its title refers to a house in the Spanish town of Cadaqués, a photograph of which Motherwell had on constant display in his studio—a testament to his enduring dedication to Spain as a subject.

Painted in 1989-90, shortly before Motherwell’s death, The Grand Inquisitor is a formidable example from the artist's last major series of paintings, The Hollow Men. Strongly related to the imagery of Motherwell’s ubiquitous Spanish Elegy series, the abstract forms are set against a bright ochre and bold red ground. Together, the works in Sheer Presence manifest the grandest of Motherwell’s technical facilities and painterly achievements

Motherwell graduated from Stanford University in 1937 and later continued his graduate work in philosophy at Harvard University. It was in 1940, when Motherwell studied briefly at Columbia University, that Meyer Schapiro encouraged him to pursue painting rather than scholarship. Following a 1941 voyage to Mexico with Surrealist painter Roberto Matta, Motherwell fully committed to painting as his primary vocation. In 1944, Motherwell was granted his first one-person show at Peggy Guggenheim’s Art of This Century gallery. Soon after, he became the leading spokesperson for avant-garde art in America. Throughout the 1950s, Motherwell lectured widely on abstract painting and held a professorship at Hunter College in New York and at Black Mountain College in North Carolina— during which he taught Cy Twombly, Robert Rauschenberg and Kenneth Noland, all of whom would become deeply influenced by Motherwell’s rigorous academia and extensive knowledge of literature and philosophy. In the 1960s, Motherwell exhibited in the prestigious São Paulo Biennial, and was awarded his first major New York retrospective at the Museum of Modern Art, curated by renowned writer and art critic Frank O’Hara. During the 1970s, Motherwell was the subject of numerous significant retrospective exhibitions in Düsseldorf, Stockholm, Vienna, Paris, Edinburgh and London. In 1983, a major retrospective of Motherwell’s work was mounted at the Albright-Knox Art Gallery in Buffalo, which subsequently travelled The Los Angeles County Museum of Art; The San Francisco Museum of Modern Art; The Seattle Art Museum; the Corcoran Gallery of Art, Washington, D.C.; and The Solomon R. Guggenheim Museum, New York. 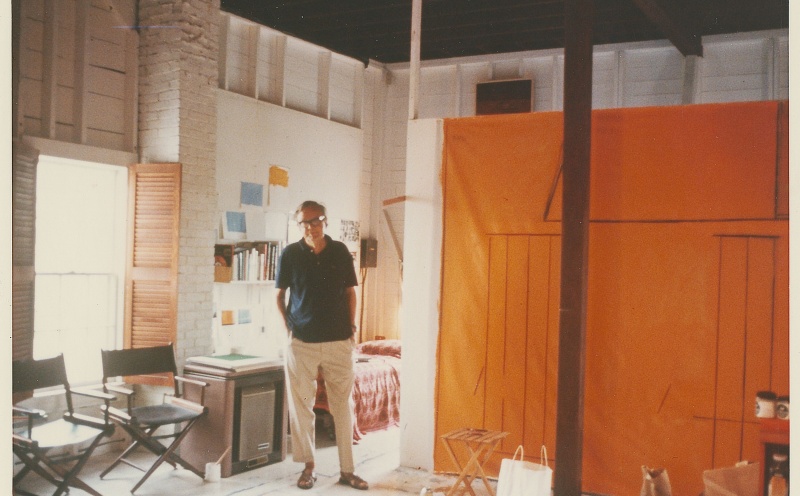