Kasmin in cooperation with the Estate of James Rosenquist and Galerie Thaddaeus Ropac (London, Paris, Salzburg), is pleased to announce an exhibition of two important paintings by James Rosenquist. On view at the gallery’s flagship 509 West 27th Street location, both works—Joystick (2002) and The Geometry of Fire (2011)—reflect Rosenquist’s lifelong fascination with space, real and imagined, and his turn in the last two decades of his career to a new kind of abstraction.

Measuring 46 feet across and spanning the length of the gallery’s wall, the monumental Joystick is an ode to Rosenquist’s love of flying. Based on reflections from a mirrored cylinder, packed with gyrating forms that move at incredible speed, the space of Joystick is invented, abstract, and wholly optical. “The priority for me is visual invention and, really, content is secondary,” Rosenquist told the late art historian Robert Rosenblum. By contrast, the central expanse of The Geometry of Fire is a reflection of real space. Painted after a devastating fire destroyed the artist’s Florida studio, the 25 foot long picture depicts the wildness of fire on the left and the destruction it causes, seen in the melting, exploding hub caps on the right. At the picture’s center is the mysterious cosmos, populated with the galaxies, star showers and black holes that became the subject of Rosenquist’s last paintings.

An essay by writer and curator, Judith Goldman, who has written extensively on James Rosenquist, will accompany the exhibition. 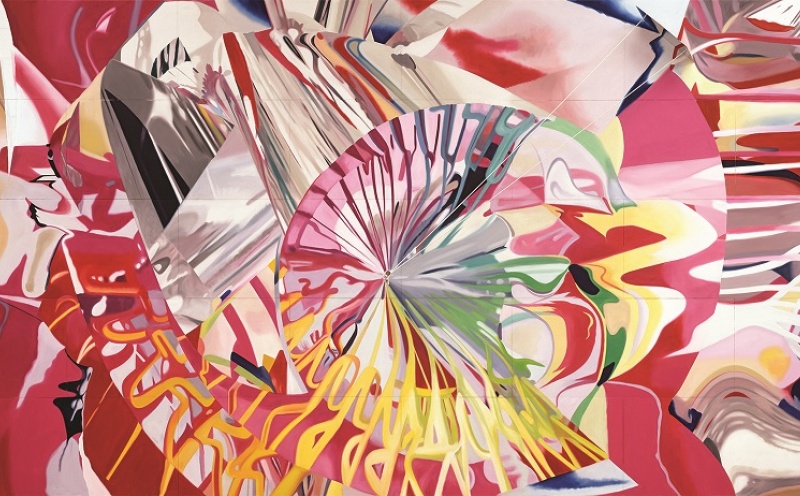