New Building by Morphosis Architects to Open in 2022

The new design for the Korean American National Museum was unveiled today at an event held at the institution’s future address in Koreatown, on the southwest corner of 6th Street and Vermont Avenue. Attended by California State Assemblymember Miguel Santiago, Senator Holly Mitchell, Senator Maria Elena Durazo, Assemblymember Sharon Quirk-Silva, and Los Angeles City Council President Herb Wesson, the public event celebrates $4 Million in funding awarded to the museum by the State of California to help support the creation of the museum. Architectural models and renderings for the building were presented by members of the architectural team from Los Angeles-based Morphosis Architects. Jae Min Chang, Board Vice Chair for the Korean American National Museum, says, “We are thrilled to be working with Morphosis Architects in creating this landmark museum. This building will stand as a vital institution for the millions of Korean Americans who have made this country their home, and will beautifully represent the strength and accomplishments of our community.”

The overall design concept for the two-story building is based on the idea of a lifted, displaced landscape—a piece of Korea grafted onto Los Angeles—containing the museum within. A sculptural roof garden and terrace crown the building with plants iconic to the Korean landscape, including maple, pine, and bamboo. Beneath the roof garden, the museum follows the classic courtyard plan of the traditional Korean Hanok, circling a central open space with a fluid, interconnected ring of galleries, meeting rooms, and offices. The museum’s street presence is defined by greenery and a patterned façade featuring a traditional Korean motif. The building will also incorporate below-ground parking for the general public and museum visitors, with capacity equal to the city-owned parking facility currently occupying the site.

The project establishes a permanent home for the museum, which was founded in 1991 as the first institution devoted to preserving, studying, and presenting the Korean American community’s cultural heritage. Over the past three decades, the Korean American National Museum has partnered with other museums, universities, and cultural centers around Los Angeles to produce exhibitions and events exploring the Korean American experience. Discussions of creating a permanent home for the institution began in 2000; over the past few years, plans have solidified as the museum board has worked with City Council and community members to select a site and develop a program in line with their mission. The location of the museum was chosen for its significance to past and future Korean Americans; the site is at the heart of Los Angeles’ Koreatown district and the epicenter of the Korean American immigrant story. The new building contributes much-needed greenery, public space, and cultural programming to this fast-developing urban community, as a dedicated platform for events, lectures, performances, and exhibitions.

Los Angeles-based Morphosis Architects are designing the project, led by a team of predominately Korean and Korean American architects and designers under the direction of Morphosis founder Thom Mayne and Eui-Sung Yi, a partner at the firm and Project Principal for the Korean American National Museum. “This museum honors the sacrifices and hardships of our parents and grandparents while showcasing the fruits of those sacrifices: the accomplishments of future generations. We aimed to reflect this sentiment in our design,” says Eui-Sung Yi. The museum is scheduled to break ground in 2020, with projected completion in 2022. 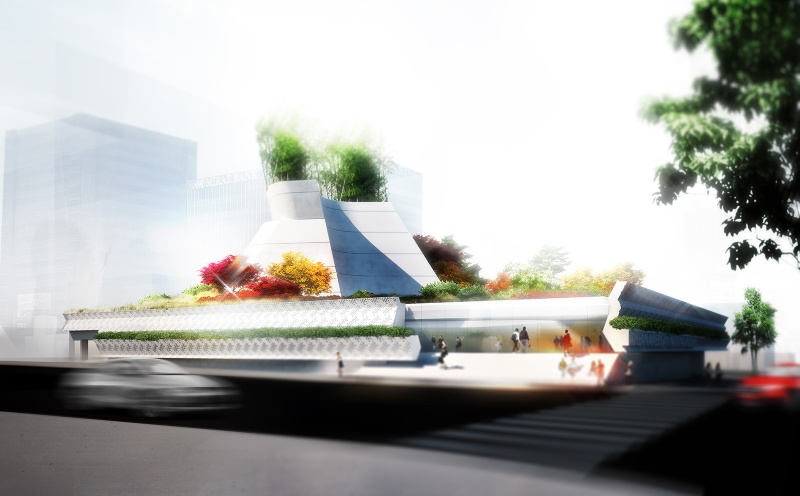