The Nelson-Atkins Museum of Art joins the Kansas City community in mourning the loss of Morton I. Sosland, who died yesterday. The 93-year-old Sosland, with his wife Estelle, was a generous and steadfast supporter of the museum for more than five decades.

“We are deeply saddened by the news of Morton’s passing, and I will miss him very much,” said Richard C. Green, Chair of the Nelson-Atkins Board of Trustees. “Morton and Estelle made an enormous impact on the museum as well as the entire community.”

The Soslands and other museum leaders inspired the generosity of the Kansas City community 20 years ago in extensive fundraising efforts that made the Generations Capital Campaign a stellar success, enabling the Nelson-Atkins to bolster the museum’s endowment campaign and complete the acclaimed Bloch Building and parking garage, as well as renovations to the original Nelson-Atkins Building.

Sosland was married for 72 years to Estelle, who was the first female Chair of the museum’s Board of Trustees. The couple’s son, Charles S. Sosland, is currently a Trustee at the museum.

“I can’t overstate the enormous impact Morton had on the Nelson-Atkins through the past five decades,” said Julián Zugazagoitia, Director & CEO of the Nelson-Atkins. “I always found him to be very curious to learn and a marvelous storyteller. He was authoritative and authentic and had a very special way of pushing the boundaries. He was a man of the future, yet deeply anchored in the admiration, understanding, and respect of the past.”

“Morton’s passion for life, profound curiosity, and overarching generosity of spirit made him the most extraordinary patron,” said Gaylord Torrence, Fred and Virginia Merrill Senior Curator of American Indian Art. "He was the catalyst in the creation of the American Indian department, collection, and galleries. Over sixteen years of working together, he became a dear and treasured friend."

The Soslands were also instrumental in the seminal exhibition of 1977 at the Nelson-Atkins, Sacred Circles, which generated a new understanding of the artistry of Native Americans. This legacy came full circle with the 2014 opening of The Plains Indians: Artists of Earth and Sky in Paris, which united the finest Plains Indians masterworks from European and North American collections. The exhibition then travelled to Kansas City and The Metropolitan Museum in New York.

The Soslands were responsible for the 1994 gift of the Museum’s iconic Shuttlecocks, a four-part commissioned work by artists Claes Oldenburg and Coosje van Bruggen. Among the Soslands’ promised gifts are three conceptual drawings of the Shuttlecocks and a fabrication model.

In addition to their American Indian masterworks, the Soslands also promised gifts from their contemporary collection, including Magdalene Odundo’s ceramic vessel, Untitled #7, which embodies both contemporary elegance and the rich traditions of Odundo’s African heritage.

In 2018, the Hall Family Foundation commissioned the installation of Walking Wall by acclaimed artist Andy Goldsworthy in honor of the Soslands and their passionate and longstanding commitment to the Nelson-Atkins. The Soslands both attended a reception celebrating the start of the wall in March of 2019. The installation will continue to evolve over four more installments, moving from the east side of the museum to its permanent site inside and outside the Bloch Building lenses. 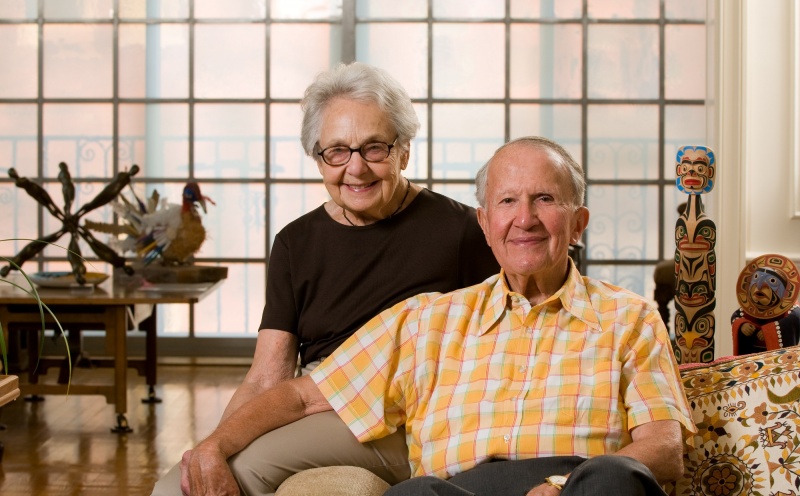