Magazzino Italian Art announces its 2020 season, including new exhibitions, lecture and film series, artist talks, and book presentations that explore postwar and contemporary Italian art within an international context. Marking Magazzino’s fourth year of programming, the season reflects the nonprofit’s commitment to engendering new scholarship of and public engagement with Italian art from the 1960s onward.

Among this year’s highlights is a new exhibition at Magazzino, exploring the synergies between American artist Mel Bochner’s work and that of Italian artist Alighiero Boetti and Italian-Argentine artist Lucio Fontana. Additionally, the museum is refreshing its ongoing exhibition, Arte Povera, with the installation of new works by Giovanni Anselmo, Pier Paolo Calzolari, Mario Merz, and Giuseppe Penone starting February 15. The season also embraces continued partnerships with cultural institutions and peer organizations that extend Magazzino’s programming beyond Cold Spring, as well as new commissions and research at the museum.

“Our 2020 season has been thoughtfully designed to look at both Arte Povera and contemporary Italian art through a global lens, in hopes that it will inspire new perspectives and scholarship,” said Magazzino Director Vittorio Calabrese. “This year, we look forward to presenting a breadth of exhibitions and public programs at Magazzino, as well as continuing our collaborative initiatives with cultural institutions that share our dedication to providing a U.S. platform for contemporary Italian artists and cultivating a deeper appreciation of postwar Italian art.”

Special Exhibition Curated by Mel Bochner in Collaboration with Magazzino

Featuring works of art from American Conceptual artist Mel Bochner's own archives in dialogue with works by Alighiero Boetti and Lucio Fontana, this special exhibition at Magazzino offers visitors the opportunity to contemplate a number of formal, procedural, and conceptual “resonances” between the three artists’ work. Curated by Bochner in collaboration with Magazzino, the exhibition explores the use of systems, language, and materials, often with a sense of irony and humor, shared by Arte Povera and Conceptualism. Addressing parallel artistic developments in the 1960s and 1970s on either side of the Atlantic—between Spatialism and Arte Povera in Italy, and Process and Conceptual art in the U.S.—and trajectories also connected to avant-garde in South America, the exhibition is the first to examine Bochner’s relationship to both Fontana and Boetti, shedding light on the artist’s special connection to Italy.

One of the most celebrated figures in Conceptual art, Bochner was initially best received in Italy, where he has spent significant time across his career. Registering the artist’s long-term, yet understudied, engagement with Boetti and Fontana, and with Italian art, history, and culture, the exhibition includes a range of works by Bochner, among them: Meditation on the Theorem of Pythagoras (1977), one of the artist’s floor-based Fontana’s Lights sculptures, made with leftover Murano glass fragments from Fontana’s Milan studio; the somber Yizkor (For the Jews of Rome) (1993), composed of a U.S. Army blanket and extinguished matchsticks; and a bilingual wall painting, Language Is Not Transparent (English/Italian) (1969/2019). The exhibition, which includes major loans from Olnick Spanu as well as other international collections, marks the first occasion an American artist’s work has been exhibited in Magazzino’s galleries.

The exhibition is accompanied by a catalog, featuring contributions from Magazzino’s 2019-20 Scholar-in-Residence Tenley Bick and Bochner. Magazzino will host Bochner in conversation with Bick on October 3. Additional details will be announced later.

For their fourth annual collaboration, Magazzino and Casa Italiana present a solo exhibition of new and recent work by Italian-American artist Namsal Siedlecki. Born in the U.S. and based in Tuscany, Siedlecki explores dichotomies—from public and private space, to art history and science—and integrates elements of chemical reactivity in his practice. The exhibition comprises work from a series of paintings that the artist petrified by leaving them in an underground source in France for four months, as well as results of his investigations into the production of synthetic rubies and replicating forms produced by nature.

During the early 1970s, Italian gallerist Giorgio Persano commissioned and exhibited a number of multiples, produced in rare editions, by artists—Giovanni Anselmo, Alighiero Boetti, Pier Paolo Calzolari, Giulio Paolini, Giuseppe Penone, Michelangelo Pistoletto, Gilberto Zorio, Marco Gastini, Giorgio Griffa, and Salvo—out of his Torino gallery named Multipli. The activities of the gallery helped to champion the idea that multiples are unique works in and of themselves and gave rise to the significance of the multiple to the practice of Arte Povera artists.

Arte Povera e "Multipli," Torino 1970-1975 showcases a selection of works and original documentary materials from the gallery. Curated by Elena Re, the exhibition is organized by Magazzino in conjunction with ICA Milan and the Italian Cultural Institute of New York.

Magazzino’s second annual lecture series, curated and organized by Magazzino’s 2019-20 Scholar-in-Residence Tenley Bick, invites leading scholars from around the world to discuss models of globalism and internationalism in Arte Povera. Drawing its title from the texts of Germano Celant—the founder of Arte Povera—the series addresses Arte Povera’s engagement with trans-geographical and cultural politics, to explorations of Marxism and socialist humanism, to frequent natural, planetary, and cartographic references.

For its third annual summer film program, Magazzino presents a weekend-long festival of films by and about Italian artists. Organized in collaboration with Artecinema—an international festival of films on contemporary art based in Naples—Cinema in Piazza is co-curated by Magazzino Director Vittorio Calabrese and Artecinema Founder Laura Trisorio.

For this conversation, organized by Magazzino, American Conceptual artist Mel Bochner discusses his work from the 1960s to the present, with a focus on his long-term, but understudied, interest in the work of postwar art in Italy with Magazzino’s 2019–20 Scholar-in-Residence Tenley Bick (and Assistant Professor of Global Contemporary Art at Florida State University). Specific attention is paid to Bochner’s interest in Italian Arte Povera artist Alighiero Boetti and Italian-Argentine artist Lucio Fontana, highlighting “resonances” between art on either side of the Atlantic in the 1960s and 1970s and Bochner’s experiences in Italy.

For this artist talk, organized by Magazzino and Casa Italiana in collaboration with GAMeC - Galleria d'Arte Moderna e Contemporanea di Bergamo, Italian artist Antonio Rovaldi presents his photographic series, End. Words from the Margins. New York City, winner of the 5th edition of the Italian Council, and his book, The Sound of the Woodpecker Bill: New York City. He documents the shorelines of New York City's five boroughs while in conversation with Harvard University Graduate School of Design Visiting Professor in Landscape Architecture Dr. Steven Handel. Recently featured in exhibitions at the Harvard University Graduate School of Design and the GAMeC, Rovaldi's project builds on his artistic practice, which employs photography, video, sculpture, writing, and design in order to construct narratives rooted in landscapes and perceptions of space and distance.

In collaboration with Rizzoli Bookstore, Magazzino presents 5468 Days, a new monograph highlighting 60 works produced between 2004 and 2019 by Italian artist Francesco Arena. The presentation, led by Walker Art Center Visual Arts Curator Vincenzo De Bellis and the artist, reflects on themes fundamental to the artist’s work, including man’s relationship with time and its effect on the spaces in which we live. 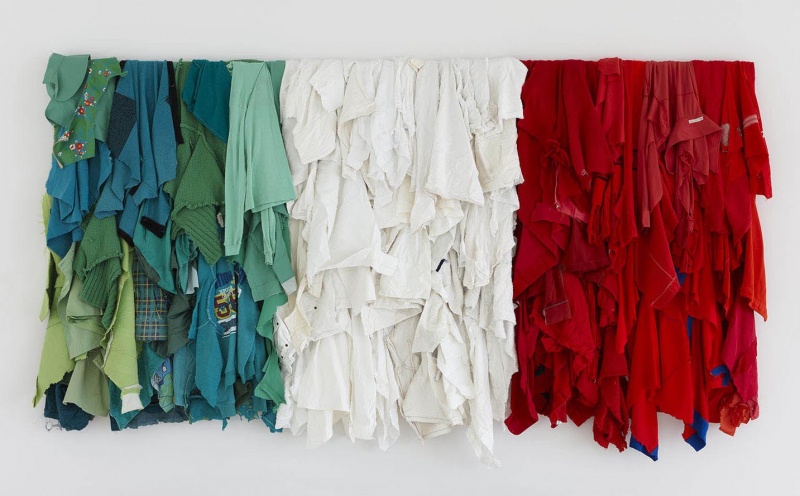