Magazzino Italian Art Reopens its Doors to the Public on Friday, July 10

Magazzino Italian Art announced today that it will begin welcoming the public back to the museum starting Friday, July 10, in accordance with state, regional, and local guidelines of the phased reopening of the Mid-Hudson Region. To mark the occasion, Magazzino has organized a special exhibition of contemporary art created by eight New York-based Italian artists during the time of self-quarantine and shared initially as part of the museum’s digital invitational Homemade. Other summer programs include a drive-in version of the museum’s annual film festival, Cinema in Piazza, with screenings of Luca Vitone’s Romanistan (2019) and Andrea Mastrovito’s animated feature film I Am Not Legend (2020) to be held in August. Details on the museum’s fall programming plans, including a special exhibition dedicated to Mel Bochner, originally slated to open in June, will be announced later this summer.

In preparation for its reopening, Magazzino has implemented a robust range of new protocols and procedural changes to ensure the health and safety of its staff, visitors, and broader community. A key change includes the on-site distribution of EGOpro devices to each visitor, making Magazzino the first museum in the United States to adopt the new social distancing technology.

For visitors who are unable to come to the museum in-person, Magazzino will continue to create new online content to complement its on-site exhibitions and programs, all of which will remain available on the museum’s Magazzino da Casa webpage.

“Our staff has been working diligently to ensure that the museum meets, if not exceeds, the highest health and safety standards set by the Centers for Disease Control and Prevention and state, regional, and local officials. We look forward to welcoming back our visitors into the galleries and beginning this new chapter together with the community,” said Vittorio Calabrese, Magazzino Italian Art Director. “During these past few months of global isolation, it has been heartening to see the response and creative exchanges that have occurred as part of Magazzino da Casa. We are eager to build on this with in-person opportunities that have been modified for our new socially distant realities and yet still enable our visitors to have a full experience of our galleries and program.”

More information on Magazzino’s summer programming, as well as new health and safety protocols, follows below.

From July 10 through September 7, 2020, Magazzino presents Homemade, a special exhibition of new work created by eight New York-based Italian artists—including Alessandro Teoldi, Andrea Mastrovito, Beatrice Scaccia, Danilo Correale, Davide Balliano, Francesco Simeti, Luisa Rabbia, and Maria D. Rapicavoli—during the global quarantine. Originally launched as part of Magazzino da Casa’s digital program, Homemade culminates with an in-person exhibition of the final artworks created over the project’s two-month duration. The approximately 30 works on view demonstrate how participating artists pushed their practice during this period, using new methods and materials, and interrogated new issues—from concrete casts that explore polarized concepts, such as connection and separation, to large-scale painting that investigates cosmic natures. The exhibition presents these works alongside a selection of previous projects by the artists to shed light on their broader creative practices. Taken together, Homemade serves as a testament to the power and resilience of art and its ability to connect us all.

Marking the first exhibition of contemporary art to be mounted on-site at Magazzino in the museum’s history, Homemade, open to the public on July 10, will be on view in Gallery 8, which will continue to serve as the museum’s dedicated special exhibition space for future projects. More information on Homemade and each artist’s project is available here.

In August, Magazzino presents an adapted version of its annual summer film program, Cinema in Piazza, that meets new social distancing guidelines. The museum will screen the U.S. premieres of two films by Italian artists in a drive-in theater adjacent to the museum’s building, in addition to making them available for a limited release online. Audiences will be able to tune into the film’s audio by radio and each presentation will be accompanied by commentary from each of the artists. Films include:

Screening begins at sunset on August 1

A documentary exploring the migration of the Roma people into Europe, filmed as artist and filmmaker Luca Vitone and his team traveled across the Balkans interviewing local Roma people about their lives.

Screening begins at sunset on August 15

An animated feature film investigating themes of identity and relationships through a reimagined version of George Andrew Romero's classic horror film, Night of the Living Dead  (1968).

More information on this year’s Cinema in Piazza program and the new drive-in format will be available this summer.

Adhering to guidelines and recommendations from the CDC and state, regional, and local officials, Magazzino reopens with a new set of protocols to ensure the health and safety of all persons in the museum. As the first museum in the U.S. to adopt EGOpro Active Tags, a social distancing device that automatically measures and alerts visitors when they have breached a safe distance, Magazzino is also implementing a mandatory online reservation system, contactless ticket exchange, mandatory use of masks (masks will be available on-site for those who do not have them), regular temperature checks, in-gallery wayfinding, sanitation stations, and increased cleaning and sanitization of the building. The museum will limit the capacity of visitors to groups of six or less, suspend guided tours, and reduce visitors’ allotted time in the museum to 90 minutes, allowing ample time for sanitization of gallery spaces. A museum guide and exhibition-related materials will be made available for download on visitors’ personal mobile devices.

A detailed overview of the museum’s new health and safety protocols, as well as how to make a reservation and what to expect during your museum visit, are available on the museum’s website. 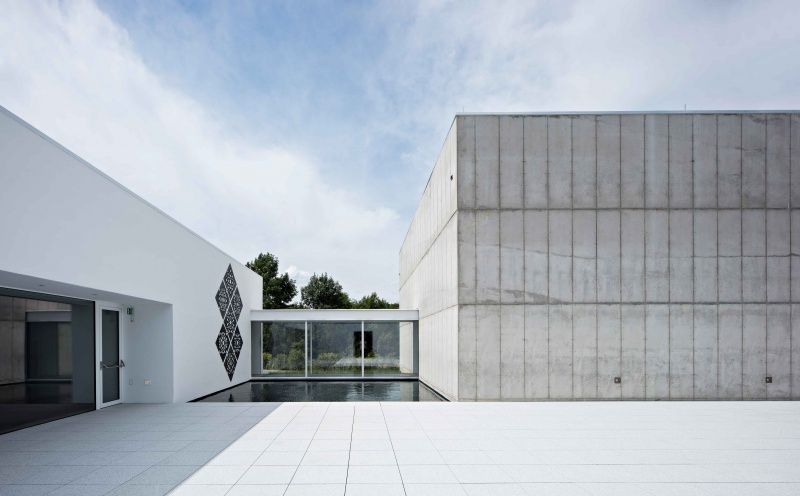