Major Exhibition of Early Work by Lee Ufan, Pioneer of the Japanese Mono-Ha Movement, Opens at Dia:Beacon on May 5, 2019

This spring, Dia Art Foundation mounts a major presentation of early sculpture by Lee Ufan, a pioneer of the Mono-ha movement that first emerged in Japan in the late 1960s. Developed in close association with the artist, the exhibition reveals Lee’s desire to present the world “as-it-is,” through the relationships between natural and man-made materials and encounters between objects, viewers, and space. The exhibition features five large-scale works, including three recently acquired installations—Relatum (formerly System, 1969), Relatum (formerly Language, 1971), and Relatum (1974). At Dia:Beacon in Beacon, New York, Lee’s work will be placed within the context of his peers who developed Minimal, Postminimal, and Land art practices contemporaneously, such as Michael Heizer, Donald Judd, Robert Smithson, and Michelle Stuart, tracing the formal, material, and conceptual relationships between these artists in Dia’s galleries for the first time. Opening on May 5, 2019, the exhibition will be on view for two years, encouraging long-term public and scholarly engagement with Lee’s work.

“The Mono-ha movement remains as formally and conceptually relevant now as it was at its conception in the 1960s,” said Jessica Morgan, Dia’s Nathalie de Gunzburg Director. “As we deepen Dia’s commitment to this period of art history, we have continued to expand our view to tell a more comprehensive narrative—casting light on artists working in parallel movements internationally. Seen alongside work from Lee’s American and European peers, this exhibition will reveal the interconnected nature of these practices, which are aligned intellectually and historically and yet emerged distinctly from one another. Lee’s groundbreaking work has expanded, and continues to expand, the possibilities for Minimal and Postminimal sculpture, so this addition to our galleries in Beacon is an exciting moment in Dia’s history.”

Mono-ha (School of Things) emerged in Tokyo as a loosely associated group of young artists in the late 1960s. The group rejected traditional representational art making, which they viewed as obsolete in an increasingly industrialized and technologically advanced world. Instead, artists associated with Mono-ha explored the properties of how different materials impact their environment. Aiming to overcome the hierarchy among the artist, the viewer, and the objects on view, Mono-ha artists arranged distinct materials in spontaneous-yet-controlled relations that highlight both the internal properties and the external forces that act upon these “things” as they come together. The resulting structures undermine expectations regarding material properties, thus “mediating a vivid encounter with our surroundings showing the world as-it-is,” in Lee’s words. Utilizing basic materials such as cotton, glass, sand, and wood, these works were often site-specific and ephemeral in nature.

Starting in 1969, Lee developed an ongoing sculptural practice that addressed these ideas in site-responsive installations of natural and industrial objects. In 1972 he changed the titles of the works that he had made up to that point to Relatum, an impulse that can be compared to the frequent use of “untitled” by American Minimal artists. As Lee later explained: “A work of art, rather than being a self-complete, independent entity, has a resonant relationship with the outside. It exists simultaneously together with the world that is and is not, i.e. a relatum.”

“Lee Ufan positions himself as a mediator of materials rather than a maker of objects,” said Dia associate curator Alexis Lowry. “He brings familiar ready-made and found materials together with an extraordinary economy of means to present situations of both physical and perceptual suspense. This heightens our awareness of each element’s inherent physical and immaterial properties. The ethics of mediation that plays out in his art mirrors his international experience living between Korea and Japan, East Asia, Europe, and the United States.”

On May 4, 2019, Lee will be honored at Dia’s annual Spring Benefit at Dia:Beacon. Further details on the event will be announced in the coming months.

Lee Ufan is made possible by significant support from COS.

The exhibition at Dia:Beacon will showcase Dia’s 2017 acquisition of three early sculptural works by Lee—Relatum (formerly System, 1969), Relatum (formerly Language, 1971), and Relatum (1974)—alongside several important loans. Each of these works demonstrate the artist’s engagement with materiality of objects in space, and the dynamics of an immersive experience for the viewer.

Relatum (formerly System, 1969), one of Lee’s earliest Mono-ha sculptures, is composed of six steel plates that are bent at ninety-degree angles and positioned evocatively in relationship to the gallery’s architecture. Ufan’s steel plates together with Robert Morris’s plywood sculptures (which are also on view at Dia:Beacon and are positioned to highlight the gallery’s architectural frame) articulate a contingent perceptual triangulation between object, environment, and spectator. Relatum (formerly Language, 1971), by contrast, juxtaposes two diametrically opposite materials. Seven large boulders rest on an equal number of thick, soft cushions. The gravitational pull of the rocks animates the responsive or adaptive nature of the underlying cushion by compression.

One of the defining concepts for Mono-ha was the connection between seemingly unrelated materials, often explored through acts of suspense. Relatum (1974) demonstrates Ufan’s engagement with this idea—a long wooden beam is precariously hung by rope above a steel plate, itself held up by a group of pebbles on the floor.

Complementing these works from Dia’s permanent collection will be two works on loan. Relatum (1974/2011) uses a steel rod, delicately balanced on a small stone, as a circumference. The arc of the rod’s movement is traced in charcoal against the gallery wall. Relatum (Iron Field, 1969) consists of a large-scale bed of sand, displaced into the gallery, which supports a field of vertically inserted steel rods. The work exemplifies Lee’s use of raw, natural, and industrial materials, and the simultaneous international concerns about Land art.

Lee Ufan was born in Kyongsang-namdo, Korea, in 1936. In 1958 he moved to Tokyo, where he studied philosophy at Nihon University. He had his first solo show of paintings in 1967. In 1968 Lee participated in the exhibition Contemporary Korean Painting at the National Museum of Modern Art in Tokyo with a triptych of spray-painted canvases in neon colors. In 1969 he participated in 9th Contemporary Art Exhibition of Japan with an ephemeral happening that departed from his earlier optical, discrete objects toward contingent structures. This show brought together artists henceforth identified with Mono-ha (School of Things), a derogatory title given by reviewers in response to the artists’ arrangements of commonplace materials. A prolific cultural critic, Lee published the first of several collections of writings in 1971. In the early 1970s, Lee participated in several exhibitions that juxtaposed American, East Asian, and European artists to highlight their shared concern with materials, processes, and sites, including the Paris Biennial (1971), Japan: Tradition und Gegenwart at Kunsthalle Düsseldorf (1974), and Z. B. Skulptur at Städelsches Kunstinstitut in Frankfurt (1978) alongside Joseph Beuys and Richard Serra, among others. In the 1980s Lee participated in group exhibitions at Centre Pompidou in Paris (1986), Seibu Museum of Art (1987), and a two-person retrospective at Padiglione d’Arte Contemporanea in Milan (1988). In 1997 his retrospective exhibition at Jeu de Paume, Paris, continued into a teaching appointment at the Paris Académie des Beaux Arts, and was followed by solo shows at Städelsches Kunstinstitut in Frankfurt (1998) and at Museum Ludwig, Cologne (1999). In recent years, acclaim for Lee’s work has brought him exhibitions worldwide, including solo exhibitions at the Solomon R. Guggenheim Museum, New York (2011), the Chateau de Versailles, Paris (2014), and at the Serpentine Galleries, London (2018), among others. In 2010 the Lee Ufan Museum, designed by Tadao Ando, opened in Naoshima, Japan. Increasingly distilled and monumental, his sculptures continue to juxtapose natural stones and manmade metal plates according to the Lee’s relational philosophy. Lee lives and works in Kamakura, Japan, and Paris. 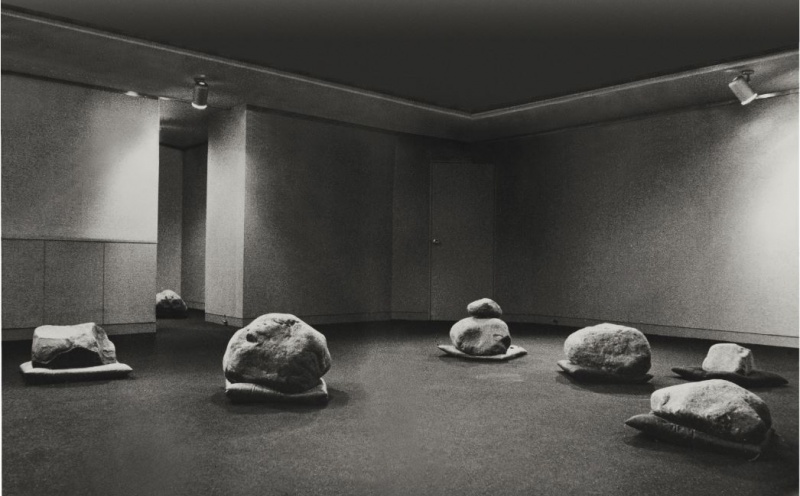