Inaugural Exhibition Explores Contemporary Life and Labor through the Lens of the Artist’s Studio, Featuring Recent and Historic Works by Yves Klein, Andy Warhol, Faith Ringgold, Carolee Schneemann, And Commissions by Frances Stark, and Jana Euler, Among Others

August 18, 2017; UPDATED November 30, 2017 – The Institute of Contemporary Art, Miami inaugurates its new permanent home with a major group exhibition exploring the significance of the artist’s studio, from the post-war period to the present day. Encompassing some 100 works in painting, sculpture, video, and installation, The Everywhere Studio brings together over 50 artists from the past five decades to reveal the artist’s studio as a charged site that has both predicted and responded to broader social and economic changes of our time. Concluding the survey is a series of new commissions by emerging artists, which represent the most current and forward-looking examples of artists’ relationships to their sites of production.

“ICA Miami thrives as a hub for artistic innovation and experimentation, so it is fitting that our inaugural exhibition centers on artists and their sites of production. The Everywhere Studio embodies the thought-provoking exchanges we aim to create between artists at all stages of their practices, and across our entire program,” said Ellen Salpeter, Director of ICA Miami. “Through free general admission, we are thrilled to welcome audiences to experience this landmark exhibition and our new permanent home.”

Alex Gartenfeld, Deputy Director and Chief Curator of ICA Miami, said, “The Everywhere Studio marks the first time ICA Miami has mounted such a far-reaching historical survey, placing the next generation of artists in dialogue with their predecessors and within an art historical framework. The exhibition explores

how artists create new ways of working and living in response to their historical and socio-economic conditions, often foretelling and epitomizing societal shifts and providing insight on influential forces in contemporary life that relate to us all.”

About The Everywhere Studio

From the studio as a site of labor, to one that blurs production, performance, and spectacle, the exhibition features artists who have contended with rapidly evolving socio-economic influences and have reflected new ways of living and working in their own studios and practices.

Organized chronologically and installed in the museum’s second- and third-floor special exhibition galleries, the exhibition begins with radical shifts that occurred in artists’ studio practice during the 1960s, at a time of both social unrest and newly emergent markets and labor forms. Paintings of this decade by Pablo Picasso, Philip Guston, and Faith Ringgold reflect how artists began to confront the relationship between their identities, their studio practices, and the tumultuous times in which they lived. Other works of this same rapidly changing period by Hanne Darboven, Dieter Roth, Tetsumi Kudo, and Giulio Paolini represent the new modes of labor and heightened anxiety explored by artists as they questioned the status of the studio as a privileged site of production.

Through works critiquing the theatricality and spectacle of their day, the exhibition also explores how some artists of the 1960s and 1970s, such as Gilbert & George, Elaine Sturtevant, and Martin Kippenberger, have treated the studio as both a stage and creator of persona. Previous influential works by their peers and predecessors are also featured, such as examples from Yves Klein’s Anthropométrie, which uses the naked female body as a living paint brush, and Andy Warhol’s invocation of automatic movement and action through his series of Dance Diagrams.

Later works from the 1990s exemplify the hyper-production and disorientation expressed by artists in response to globalization, the importance of networks, and an economy increasingly centered around the exchange of information. The survey includes Andrea Zittel’s Time Trials (A-Z), in which the artist uses the studio to isolate herself and conduct experiments that are strictly regimented and recorded. By contrast, the works of Jason Rhoades, Cheryl Donegan, Rochelle Feinstein, and Joyce Pensato, among others, illustrate artists’ examination of the material excesses and privileges associated with the archetype of the artist in their studio.

Concluding the exhibition are commissioned works by emerging artists, which provide critical insight into the continued relevance of the artist’s studio in understanding pervasive elements of contemporary life, such as the rapid exchange of information and emphasis on performance and spectacle. In addition to new works by artists including Margaret Honda, Yuri Pattison, and Frances Stark, a new suite of wire sculptures by Neïl Beloufa are featured in the exhibition, based on office and studio furniture and addressing the new material possibilities of the studio. New sculptures by Matthew Angelo Harrison, which incorporate 3D printers, will theatrically produce new sculptures over the course of the exhibition that examine the relationship of labor to identity. Set in dialogue with works by peers and predecessors, the commissions further emphasize the radical shifts in studio practice that have evolved over the latter half of the 20th century. 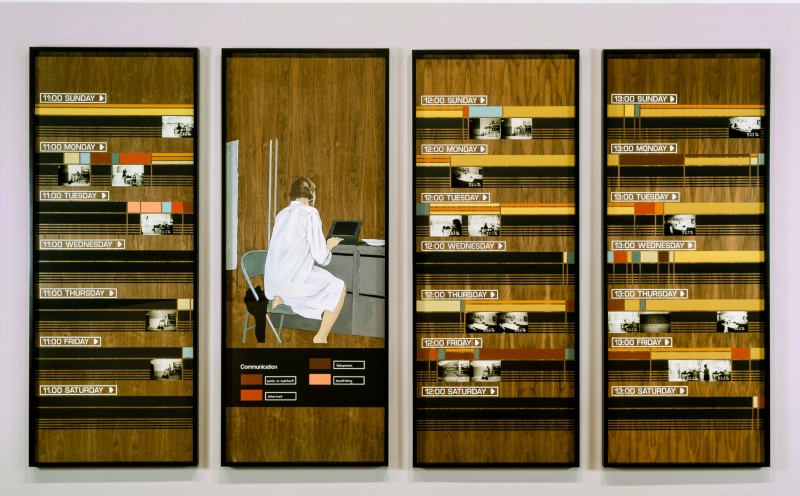