Featuring guests including Kemp Powers on Pixar’s Soul, Yo-Yo Ma on the Silk Road Project, Isabel Allende on The House of Spirits, Rian Johnson on Knives Out, Susan Orlean on The Orchid Thief, Thomas Heatherwick on The Vessel, Bill T. Jones on Afterwardsness, Yaa Gyasi on Transcendent Kingdom, Chip Kidd on the cover of Jurassic Park, and Kamilah Forbes on the Apollo Theater’s adaptation of Between the World and Me

WaitWhat, the media invention company founded by former TED executives June Cohen and Deron Triff — creators of the award-winning hit podcasts Masters of Scale and Meditative Story — today released the premiere episode of Spark & Fire, an imaginative new audio series that turns the “creative process” into a captivating, edge-of-your-seat hero’s journey. Skillshare, the world’s leading online learning community for creative and curious people, joins WaitWhat in an exclusive partnership to bring Spark & Fire to its community of more than 12 million members who seek inspiration and ideas for their creative journeys. Spark & Fire is now available on Apple Podcasts, Spotify and Amazon Music.

In each episode of Spark & Fire, a single artist or creator tells the gripping first-person story behind the birth of a beloved creation, whether an iconic building, a beloved book, a genre-defining film, or a style-setting sneaker. It’s not an interview show; it's a story told entirely in the words of the creative. From the initial spark down the crooked path of invention, each episode shares an unpredictable, unexpected tale of what really happens on the road to success.

“Creativity is as mysterious and elusive to humans as love. We crave it. We stalk it. We search for ways to bring it out in ourselves,” says June Cohen, Executive Producer of Spark & Fire. “Spark & Fire is the first series of its kind where iconic creators reveal — through the intimacy of a first-person story — what’s inside their minds as they bring iconic works to life.”

“Much has been written about the creative process, but nothing like Spark & Fire exists, and whether you’re a professional creative or someone who hungers to express yourself more creatively, this series will inspire creativity through storytelling,” says Matt Cooper, CEO of Skillshare. We couldn’t be happier to bring Spark & Fire to our community as a call to adventure to lead a more creative life.”

The guest list for the series brings together a diverse set of voices. Episodes include co-writer and co-director Kemp Powers on the creative journey behind Pixar’s first movie with a black protagonist — Soul; novelist Isabel Allende on the untold, family stories behind the writing of The House of the Spirits; cellist Yo-Yo Ma on the radical cultural collaboration behind Silk Road Project; The Last Jedi director Rian Johnson on the creative evolution of the genre-reinventing movie Knives Out; journalist Susan Orlean on the unexpected professional and personal transformations uncovered while miring through a Florida swamp to write The Orchid Thief; architect Thomas Heatherwick on the myriad of creative collaborations that lead to the unveiling of The Vessel; Tony-winning choreographer Bill T. Jones on the unprecedented conditions of rehearsing and performing during a pandemic, and how it led to his masterpiece Afterwardsness; Homegoing author Yaa Gyasi on the emotionally searing road to write Transcendent Kingdom; Chip Kidd on a young designer's creative journey to one of the most iconic book cover designs of all time — Jurassic Park; producer Kamilah Forbes on the adaptation of Ta-Nehisi Coates’s Between the World And Me from the page to the stage of the Apollo Theater and onto the screen with HBO; and more.

Each episode in the series begins with a short feature on a leading arts or creative organization who has made an enduring, unique contribution to building the creative movement in the United States and abroad, including collaboration with The Apollo Theater, Jazz at Lincoln Centre, New York Public Library, Brooklyn Public Library, Cooper Hewitt, The Armory, Carnegie Hall, and PEN World Voices, among others.

Podcast listeners can subscribe to Spark & Fire for free weekly on Apple Podcasts, Spotify, Stitcher and Amazon Music or wherever they listen and sign up for the Spark & Fire email newsletter at www.sparkandfire.com

WaitWhat is a media invention company, recognized for high-quality, genre-defining content. Founded by June Cohen and Deron Triff — the executives who built and led TED’s media organization from its beginnings through its establishment as a global phenomenon — WaitWhat is building a valuable, independent portfolio of premium IP, designed around essential human needs — with a contrarian strategy to scale. In everything the company creates, it aims to elicit the contagious emotions of wonder, curiosity, and mastery — infusing our content with “Wait, what?” moments that spark curiosity and change our understanding of the world. WaitWhat’s properties — each earning Webby Award honors and together downloaded more than 50 million times — include Masters of Scale (hosted by LinkedIn co-founder and Greylock partner Reid Hoffman), Meditative Story (in partnership with Arianna Huffington’s Thrive), Should This Exist? (hosted by Silicon Valley pioneer Caterina Fake), and Spark & Fire (in partnership with Skillshare). To learn more, go to www.waitwhat.com.

Skillshare is the world's largest online learning community for creativity. With more than 12 million registered members and over 30,000 video-based classes in a wide range of creative disciplines from graphic design to photography to painting and illustration to interior design—taught by industry experts including Roxane Gay, Aaron Draplin, Emily Henderson, Thomas Frank, and Jeff Staple—Skillshare's mission is to support professional and personal growth through creativity. To learn more, go to www.skillshare.com. 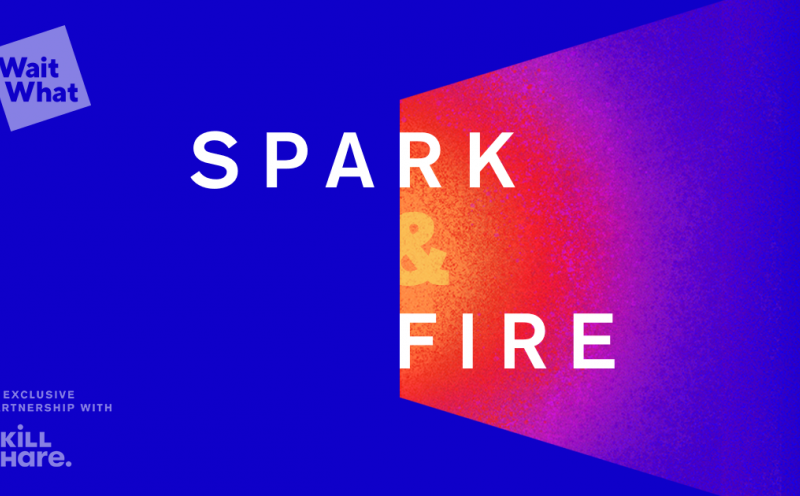