On the occasion of the fiftieth anniversary of Mel Bochner’s first Measurement Room, Dia Art Foundation has commissioned the artist to create a new, large-scale work from the series this fall at Dia:Beacon in Beacon, New York. In 1969 Bochner’s Measurement Room—which meticulously recorded the dimensions of a gallery in tape across the surface of its walls—was presented as part of his first solo show, Measurements, at Dia cofounder Heiner Friedrich’s Munich gallery. The new site-specific installation is based on an unrealized work titled No Vantage Point: Eye Level Cross-Section of a Room, which was conceptualized for Galerie Heiner Friedrich in 1969, following the Measurements exhibition. Bochner’s Measurement Room: No Vantage Point opens November 9, 2019, at Dia:Beacon and will remain on view for a year.

“Since the 1960s, Mel Bochner has challenged viewers to interrogate the seemingly objective systems that structure our daily lives. Among many qualities, his work is distinguished by his subversive embrace of banality as a method of perceptual discovery,” said Jessica Morgan, Dia’s Nathalie de Gunzburg Director. “When Bochner created his first Measurement Room in 1969, it proved to be a formative moment for him and marked a turning point in his practice. The new iteration of this series at Dia:Beacon is a timely homage to this important juncture in Bochner’s career.”

The Measurement series started during a period of significant material and conceptual experimentation for the artist in the late 1960s and early 1970s, when he was exploring the abstract systems that govern the world around us. Bochner was particularly interested in examining readymade systems of measurement and language and their limited ability to explain and describe an object. In examining these systems, he predicted that through this body of work, “art would go from being the record of someone else’s perception to becoming the recognition of your own.”

Bochner’s Dia:Beacon installation expands on these early explorations and his original sketches for No Vantage Point. The work maps the surfaces of one of the museum’s largest galleries with a site-specific installation of red tape, running horizontally across the walls about six feet from the floor and corresponding to the level of the artist’s eye. Bochner refers to this level as his “horizon line,” a relative marker through which he measures his own perceptual experience of the world, and a control against which viewers can also measure their own relative position within the architectural and aesthetic frames of the installation. This simple intervention has the power to disorient the viewer and subvert the dominance of Dia’s industrial-scale architecture, redirecting attention back toward the phenomenological experience of the body in space. Additionally, the installation at Dia marks Bochner’s first use of red tape in a Measurement work.

“In the Measurement series, Bochner challenges the idea of the rarefied art object, proposing that the space of the gallery itself can also have experiential aesthetic value,” said Alexis Lowry, Curator, Dia Art Foundation. “While these works mathematically describe the architecture of the room, they also irreverently reveal the limitations of such descriptive terms. The viewer has a sense of walking into a three-dimensional blueprint, where the information recorded on the walls overlaps with our visual experience, blurring the real and perceptual boundaries of the space.”

In conjunction with the anniversary of Bochner’s Measurement series and the installation at Dia:Beacon, Dia is working closely with the artist on a publication that examines the beginnings of this series. The book will be published spring 2020.

Mel Bochner was born in Pittsburgh in 1940. He received his BFA and an honorary DFA from the School of Art at Carnegie Mellon University in Pittsburgh, where he studied under Wilfred Readio and Douglas Wilson. After receiving his BFA, Bochner studied philosophy at Northwestern University in Evanston, Illinois, before moving to New York City in 1964. Regarded as one of the leading American Conceptual and Postminimal artists of the 1960s and 1970s, Bochner’s practice investigates the relationship between image and language through a wide variety of media, including installation, painting, and photography. His work has been included in Documenta (1972) and the Whitney Biennial (2004), among others. Notable solo exhibitions have occurred at Carnegie Mellon University (1985), Sonnabend Gallery in New York (2000), and Whitechapel Gallery in London (2012), and major retrospectives have been held at the Yale University Art Gallery in New Haven, Connecticut (1995), and National Gallery of Art in Washington, DC (2011). His work is collected by international institutions such as the Museum of Modern Art in New York and Tate Modern in London. He currently lives and works in New York. 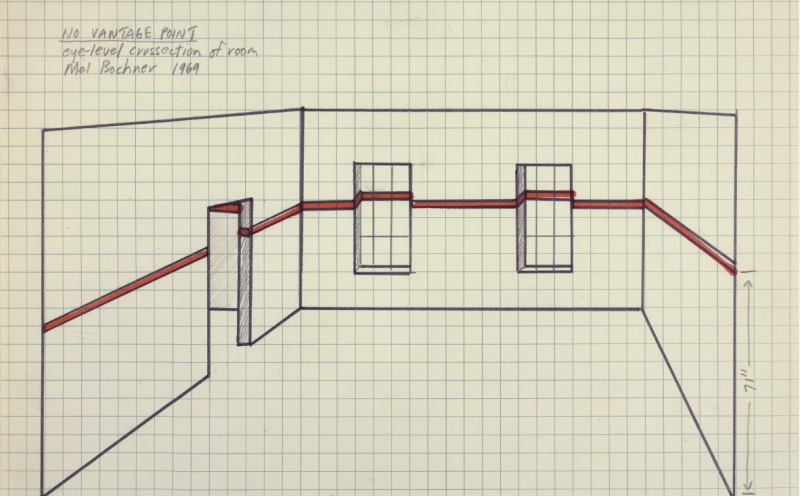