Original 1769 Structure was Home of Francis Lightfoot Lee, Signer of the Declaration of Independence

Warsaw, VA – June 11, 2020—The Menokin Foundation today announced the start of construction on The Glass House Project, which will transform the ruins of “Menokin”—the home of Francis Lightfoot Lee, a signer of the Declaration of Independence—into a new model for the dynamic preservation of historic buildings. The Glass House Project, the only initiative of its kind in the world, will preserve the remaining portions of the 1769 house and replace missing walls, floors, and sections of the roof with glass. The glass serves not merely as a protective covering for the fragile original structure, but as part of an integral whole that brings the house back to life. The use of glass as a structural element, blending seamlessly with the 18th century stone, brick, and timber is a tour de force of design and engineering. This fusion of technology and mission embodies the Menokin Foundation’s commitment to innovation in design and historic interpretation.

While traditional restoration methods cover evidence of the human story that historic structures present, the transparent design of the Glass House Project emphasizes the deconstructed architectural elements of the building and provides a literal window into the lives of those who built, lived, and worked at Menokin. Fingerprints are visible in the handmade bricks, marks of hand tools are etched on the timbers, and the successes and failures of the builders are revealed.

Upon completion of the Glass House Project in early 2023, visitors will be able to enter the house and physically explore both the remnants of the original building and the new spaces defined by the glass structure. Views of the surrounding landscape through the glass walls will continually connect visitors to the pristine natural environment and the traces of the tobacco plantation where generations of enslaved laborers once worked. This interplay of interior and exterior, historic past and modern-day design, allows a layered and complex look not only at the house but also the people who lived on the site over the centuries—the Rappahannock, the English settlers and the Lee family, and the people who were enslaved at Menokin.

The Menokin Foundation was founded in 1995 to preserve and interpret the remains of the house—one of the best documented 18th-century homes in the United States. The original house, which had fallen into ruin in past decades, is a National Historic Landmark and stands on 500 acres of open agricultural fields, woodlands, and waterways in the rural Northern Neck of Virginia.

“Until the Foundation acquired it, Menokin was the only home of a Virginia signer of the Declaration of Independence threatened by being lost to the ravages of time and the elements,” said Menokin Board of Trustees President, Benjamin Ogle Tayloe, Jr. “The Foundation decided that it was imperative, not only to save what remained of the house, but to develop an innovative way of connecting people to the span of history that the house embodies.”

“With the Glass House Project, and all the initiatives on the Menokin site, our goal is making history visceral, real, and relevant, and showing people how they are a part of the continuum of stories that make up the identity of a place,” said Executive Director, Sam McKelvey. “Menokin links together the sweep of history—the American Indian experience, the arrival of the English in North America, the story of chattel slavery and privilege, the colonial period and the revolutionary war, the Civil War and civil rights to our own time.”

The Menokin Foundation selected the architecture firm Machado Silvetti for the project because of its research-based process, and experience and sensitivity in merging contemporary aesthetics with complex cultural and historic contexts. This unique approach is exemplified in all of the firm’s work, including such notable historic and cultural projects as the Getty Villa, the Qasr al Muwaiji Research Center and Museum, and the revitalization and expansion of Gio Ponti’s only U.S. building, the Denver Art Museum’s Martin Building.

In 2016, the Glass House Project was awarded the “Best of Design Award for Unbuilt > On the Boards” by Architect’s Newspaper, and in 2019 the Menokin Foundation received a major grant by The National Endowment for the Humanities for the project.

“The remains of the Menokin Plantation challenged our imagination to develop a design that, while preserving and restoring what exists, would provide the visitor with an innovative, distinctive experience.” said Jorge Silvetti, co-founding principal of Machado Silvetti. “Without resorting to reconstruction or re-enactments of past actions, the work we developed together with the Menokin Foundation and the extraordinary professional team of consultants, advisors, and supporters, will engage the visitor in an immersive experience provoking not only their curiosity but their active imagination. The glass structure is the design feature that best encapsulates this idea. It will allow visitors to fully understand the original house, re-establish its overall configuration, its footprint and its functions, and from both the outside and the comfort of the inside, highlight its relationships to the natural environment. At the same time, it will reveal, at close range, what is usually not seen: the work of restoration and conservation, the materials used and the methods and craftsmanship involved in local construction.”

“Working with glass as a building material is an idea that was first perceived as intriguing but impractical, even crazy,” said James O’Callaghan, co-founder of Eckersley O’Callaghan. “The innate curiosity of being engineers, combined with what proved to be an informed bravery, helped us push the boundaries of what you can do with this exceptional material. The Glass House Project is a unique expression of these possibilities—it literally and metaphorically gives a transparent view of history and of the art and science of construction.”

The Menokin Foundation’s approach to preservation and interpretation also allows for something unusual at historic sites: the flexibility to evolve the stories it explores, both uncovering the evidence of the past and addressing contemporary issues. Continuing archaeological discoveries and programming and exhibits on the Menokin site will be used to help tell the story of those who are often overlooked in historic accounts—the plantation’s enslaved laborers and the Rappahannock Tribe who lived on the land for centuries and gave “Menokin” its name.

One example of Menokin’s method of “dynamic preservation” is the Remembrance Structure, designed by Reid Freeman of REID architecture and completed in 2018. This pavilion was erected above the archaeological footprint of an 18th-century field slave dwelling. The structure does not have permanent foundations, to allow future research and not to disturb the site. Its wood framing demonstrates the timber-building techniques used at the time the dwelling was constructed, and the structure is wrapped in a translucent agricultural fabric. With the aid of solar lighting, the pavilion glows at night in memorial of the enslaved residents of the former plantation. The pavilion serves as a platform to open conversations about the role that slavery played in early colonial plantations and our nation’s past, as well as its legacy in our communities today. The project received Design Merit awards from AIA Virginia in 2018 and from the Society of Registered Architects (SARA) of New York in 2019.

In conjunction with the preservation of the remains of the house and the surrounding land, the Menokin Foundation is creating non-intrusive trail heads to offer access and interpretation of the landscape, including bird watching hides, natural viewing points, kayak and canoe launches, and picnic spots along the trails. Menokin’s location in Virginia’s Northern Neck is within easy travel distance for a range of visitors—the population within a three-hour drive is more than 10 million.

Through its innovative approach to historical preservation, Menokin will provide a transparent view into history, exploring the social, political, and economic dynamics on the site and in the nation, and revealing how these forces have shaped our world.

ABOUT THE MENOKIN HOUSE

Menokin is a national landmark: the 1769 home of signer of the Declaration of Independence, Francis Lightfoot Lee and his wife Rebecca Tayloe Lee. This former manor house remains one of Virginia’s best examples of original colonial architecture. Built near the Rappahannock River, the ruin is nestled among 500 nearly untouched acres of historical landscape, 325 of which are part of the Rappahannock River Valley National Wildlife Refuge. The Menokin Foundation is a 501(c)3 nonprofit that is supported wholly by philanthropic contributions from individuals, foundations, and corporations.

Machado Silvetti is a leading architecture and urban design firm recognized for creating, revitalizing, and expanding distinctive buildings and spaces in the United States and around the world. Its work is diverse in location, scale, and type, and merges contemporary agendas and aesthetics with complex cultural and historic contexts. Machado Silvetti’s research-based approach explores and celebrates each project’s unique character, expressed through designs that are original in their conceptual clarity and visual intensity. Founding partners Rodolfo Machado and Jorge Silvetti began working together in 1974, before starting Machado and Silvetti Associates in 1985. In 2015, they appointed Jeffry Burchard and Stephanie Randazzo Dwyer as partners, updating the firm’s name to Machado Silvetti. To learn more about the firm, visit http://www.machado-silvetti.com/.

Eckersley O’Callaghan’s team of structural and façade engineers has cultivated an international reputation through a commitment to research and innovation. The firm’s iconic work with structural glass has received some of the highest accolades in the industry, including the IStructE Supreme Award for Structural Engineering Excellence, while the firms’ use of other materials in structural and façade engineering has gained similar recognition. Among Eckersley O’Callaghan’s many projects are work with SFMOMA, the V&A, the Corning Museum of Glass, and multiple projects with Apple. To learn more about the firm visit https://www.eocengineers.com/en.

REID architecture is an award-winning full-service architecture practice that focuses on a range of cultural, institutional, and commercial projects. Through a focus on light, materials, and site, REID creates sensitive interventions that enhance the human experience of place and provides innovative solutions with both new and existing structures. Founder and architect Reid Freeman’s project experience includes the renovation and expansion of the Israel Museum in Jerusalem, the planned expansion of the Bornholm Kunstmuseum in Denmark, and the design of the Ross + Field Film Center in Dallas’ cultural district. The firm’s work includes other open structures for academic institutions that activate landscapes and enhance a deeper understanding of site. https://reidarc.com/ 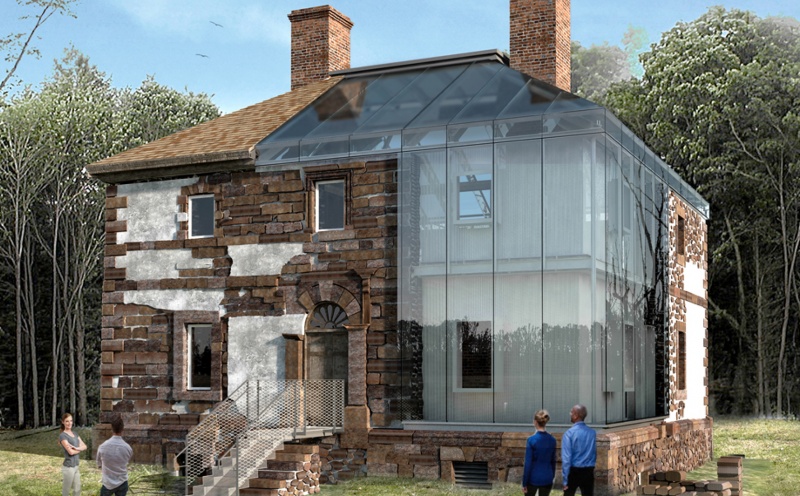 Courtesy of the Menokin Foundation