Reimagined, Artist-centered and Immersive Installation in Renovated Martin Building To Present Contemporary and Historical Art from Pacific Northwest and Alaska

The Denver Art Museum (DAM) team has completed the installation of its monumental Haida poles, marking the beginning of art installations for a redesigned and reinstalled Northwest Coast and Alaska Native gallery. The reimagined space will be among the first art galleries to reopen to the public in the initial phase of the renovated Lanny and Sharon Martin Building on June 6, 2020.

The DAM’s beloved Haida poles, frequently misattributed as “totem” poles, were the first items installed in the new space. Featured in the 1939 Golden Gate International Exposition, the largest is called the Land Otter Pole, and tells the story of a man who narrowly escaped capture by land otters after his canoe capsized. This pole was carved by Dwight Wallace in 1870.

The museum collaborated with descendants of the Wallace family in November 2019 to celebrate the placement of the poles in their new locations, which will enable museum visitors to walk around the poles and see carvings from all sides. The pole raising included singing, dancing and storytelling. Video from the event, as well as additional details and images, can be seen here. Engineering support to install the 22-and 29-foot poles, originally from the Kaigani Haida village of Sukkwan, Alaska, was provided by Demiurge LLC.

“It was an honor to host Lee Wallace and his family here in Denver. From the start of planning, we aimed to approach this reinstallation with utmost respect and awareness for cultural protocols,” said John Lukavic, the Andrew W. Mellon Curator of Native Arts at the DAM. “The opportunity for our staff to participate in the raising ceremony will leave an indelible mark on us all. Visitors will now have the opportunity to get up close to the poles to see details and experience them in meaningful ways. You can now more easily see carved figures that relate to the stories on the poles, such as land otters, minks, human figures.”

The poles were the first pieces installed in more than 2,500 square feet of reimagined, immersive gallery space featuring works by Indigenous artists from the western coastal region of North America, stretching from Puget Sound to southeastern Alaska. Access to the galleries will be included in general museum admission.

The DAM is home to a world-renowned and comprehensive collection of American Indian arts. Works in the collection include objects created by artists from more than 250 Indigenous nations across the United States and Canada, and from artistic traditions within these cultures spanning the past 2000 years.

The Northwest Coast and Alaska Native art gallery on level 2 of the Martin Building is one of three new galleries that will be presented in the first phase of reopening following the museum’s multi-year, $150 million renovation and construction project. The DAM will reopen in phases, welcoming visitors to explore its unified campus starting next summer. The June 2020 phase will include three galleries, the new Anna and John J. Sie Welcome Center, the Bartlit Learning and Engagement Center and two dining options. The complete campus will be open at the end of 2021, which coincides with the 50th anniversary of the iconic Gio Ponti-designed building.

“We are excited to welcome our community back to their Denver Art Museum this summer to explore dynamic new galleries and spaces to get creative,” said Christoph Heinrich, Frederick and Jan Mayer Director of the DAM. “The Northwest Coast and Alaska Native collection is a gem in our global holdings. In collaboration with Native artists and community members, this new installation will share powerful stories and creative traditions from the Pacific Northwest and Alaska.”

“Indigenous artists from the Northwest Coast are deeply connected to community and place,” Lukavic said. “Their artwork reflects connections between humans, the landscape and animals, as well as supernatural and ancestral beings. Artists from the region working today produce works that reinforce links to the past and at the same time push customary arts in new directions.”

The new Northwest Coast and Alaska Native art installation will build upon past successes of centering presentations and stories on artists. Visitors will have the opportunity to explore several spaces that highlight the systems of community and place that root the artists and their practice.

Sections in the Northwest Coast gallery include Sharing Knowledge, Seeing the Line, Transforming Spaces and Expressing Values. Alaska Native groupings look at the ways artworks and artists honor the landscape and the animals that live there.

“We want to convey that continuity and change are interrelated aesthetic and cultural forces that inform artists’ world views, and influence ways of life,” Lukavic said. “Interpretive moments will give visitors the chance to hear directly from artists, as well as encourage close looking to give greater insights into the perspectives of Indigenous peoples and artists.”

In addition to the monumental house poles, DAM is home to several large-scale works that will anchor the gallery experience. One piece, titled Welcome Figure, commissioned in 1914 by Johnny Scow, Chief of the Kwikwasut’inuxw band of the Kwakwaka’wakw, was in fact created as a protest against the Canadian government for the theft of land near Kingcome Inlet. Historically, works like this marked territorial boundaries or greeted guests as they arrived for feasts and ceremonies. Instead, this particular work was “gifted” to settlers occupying the territory that traditionally was stewarded by the Kwakwaka’wakw. The museum has commissioned acclaimed Kwakwaka’wakw artist Marianne Nicolson to create a work that reflects on this history, and the ongoing issues of land rights. The artist ultimately asks visitors to “turn inward and ask: What about this place? Who was originally here? What is the history that has been erased, forgotten, or placed elsewhere?”

Objects in this grouping demonstrate ways artists encode their works with cultural knowledge. Clan histories, the supernatural origins of the cosmos, and the ecosystem is recorded in their art. Gallery text with quotes from Haida artist Gwaai Edenshaw underscore how individual artists experience this. “I think that the idea of a self-taught artist is a bit of a myth,” said Edenshaw. “We are all the recipients of the knowledge collected and stored in the great works of our people that came before us. They are some of our greatest teachers. It is a gift that we need to recognize and acknowledge.”

Artists working today learn their skills and processes from elders or master artists, in art schools and classrooms, or in studios and workshops. The intergenerational transmission of knowledge is physically and symbolically embedded in the art in this grouping, which includes Kwakwaka’wakw masks, as well as Chilkat and Salish weavings, with past works juxtaposed with recent creations.

Prompting visitors to explore ways of seeing with an artist’s eye, this grouping presents the idea of “formline,” a term coined by American art historian Bill Holm to describe the distinct and recognizable visual language used by Northwest Coast artists. These design elements accentuate shapes in artworks, and examples are presented, including a deeper dive into pieces featuring the Dogfish crest.

A crest is a pictographic element that communicates kinship, rank, ancestral origins and hereditary land rights of the wearer, and is often a depiction of a supernatural being with whom a clan ancestor once interacted. Associated with heraldry among Northwest Coast peoples, the Dogfish crest is presented in several contexts—textiles, jewelry, hats and sculpture. Visitors will learn how to identify the dogfish across objects and learn how artists shift the design forms depending on form and materials.

One of the most immersive experiences in the gallery, the Transforming Spaces section presents collection masterworks, including ceremonial regalia, and four house poles commissioned by the museum from Kwakwaka’wakw chief and artist Doug Cranmer in 1969. Presented as an architectural experience visitors can walk through, interpretive material will provide the opportunity to gain a deeper understanding of ceremonial spaces and why they are important to the people who use them.

This section will present historic and contemporary works that use or reference ceremonial coppers, highly prized markers of wealth and identity used by Northwest Coast Indigenous peoples, primarily by Tlingit, Haida, Tsimshian, Nuxalk and Kwakwaka’wakw peoples. Visitors will explore the different uses of copper in the past, as well as more contemporary works by artists including Michael Nicoll Yahgulanaas (Haida) and Kwakwaka’wakw chief and carver Beau Dick.

Three groupings of works highlight Alaska Native artists, with a focus on the relationship between Indigenous peoples and their reciprocal relationship with the land and the animals who inhabit it. Artworks using animal skins, fur and intestines for protective garments reflect concepts of regeneration and transformation that inform many Alaska Native worldviews and ways of living. Contemporary artists continue to honor relationships with land and animals by using local materials. Works and insights by featured artists, including Sonya Kelleher-Combs, bring artist voices to the visitor experience.

The museum’s renowned, comprehensive American Indian art collection underscores the vibrant and ongoing traditions advanced by individual artists. The Northwest Coast and Alaska Native gallery is the gateway to the DAM’s renovated Martin Building as well as the American Indian art gallery on level three, which will reopen in 2021. 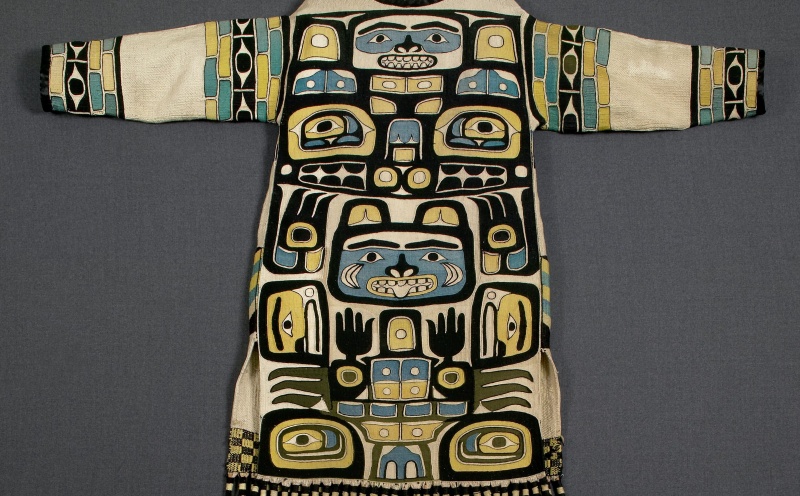