In March 2017, The Nelson-Atkins Museum of Art will open the renovated Bloch Galleries in the museum’s original 1933 Beaux-Arts building, featuring the Marion and Henry Bloch Collection of Impressionist and Post-Impressionist art, on view for the first time since 2007.

Comprised of nearly 30 masterpieces acquired by the Bloch family over the course of two decades and gifted to the museum in 2010, the Bloch Collection nearly doubles the museum’s current holdings of Impressionist and Post-Impressionist art. In 2015, the Marion and Henry Bloch Family Foundation provided a $12 million gift to support renovation of the museum’s European art galleries to integrate the Bloch Collection into its existing collections and keep the work on permanent view.

“This transformational gift underscores the Bloch family’s enduring commitment to our museum, and ensures that this unrivaled collection is a resource for visitors from Kansas City and beyond,” said Julián Zugazagoitia, Menefee D. and Mary Louise Blackwell CEO & Director of the Nelson-Atkins. “We are deeply grateful to the Blochs for their unwavering support over the years, and we are pleased to integrate this Collection into state-of-the-art galleries and within the context of the museum’s European art collections.”

Next year will also mark the 10th anniversary of the Bloch Building, a 165,000-square-foot expansion designed by Steven Holl. The expansion allowed the museum to accommodate its growing permanent collection and increased attendance, which has continued to grow following the introduction of a free admission policy in 2002.

One of the leading encyclopedic museums in the country, the Nelson-Atkins is recognized for its European collections, which contain more than 1,100 works of art ranging from the medieval period to the late 19th century, including works by Caravaggio, Rembrandt, El Greco, and one of only 25 authenticated paintings by Hieronymus Bosch in the world. The Bloch Collection diversifies and deepens the Nelson-Atkins’ Impressionist and Post-Impressionist holdings, which include masterpieces by Claude Monet, Vincent Van Gogh, Paul Gauguin, and Paul Cézanne.

With the renovation and reinstallation of the galleries, the Bloch Collection will be incorporated into the museum’s permanent collection of European art, a project supported by consultations with Philippe de Montebello, former Director of the Metropolitan Museum of Art in New York, and Marc F. Wilson, Director Emeritus of the Nelson-Atkins, who worked with the Bloch family over the years to help them build their collection.

The Bloch Collection made its public debut during the 2007 opening of the Bloch Building and was gifted to the museum in 2010 in celebration of the Nelson-Atkins’ 75th Anniversary. The Collection features works by the great masters of Impressionism and Post-Impressionism, including significant works byClaude Monet, Gustave Caillebotte, Camille Pissarro, Eugène Boudin and Alfred Sisley. There is a particularly strong representation of Impressionist portraits by Edgar Degas, Pierre-Auguste Renoir, and Berthe Morisot. The movement’s stylistic evolution can be seen in works by George Seurat and Paul Signac. Highlights include Édouard Manet’s The Croquet Party, Vincent van Gogh’s Restaurant Rispal at Asnières, Paul Gauguin’s The Willow Tree, and Paul Cézanne’s Man with a Pipe.

“Building this collection with Marion and the daily inspiration it provided in our home greatly enriched our lives,” said Henry Bloch. “I look forward to these works going on view at the Museum 10 years after their last exhibition, and I am especially pleased to share our collection with the city.”

The renovation of the Bloch Galleries, designed by Kansas City-based BNIM Architects, will transform 9,000 square feet of the original 1933 Nelson-Atkins Building. The expanded galleries will add more than 120 feet of wall space, and create an open viewing experience with sightlines encouraging viewers to make connections among works. The installation will present themes within the general chronology, and help to align the chronology of the building, presenting a fuller story of Western art. The galleries will feature state-of-the-art technology, including tunable lighting that can simulate the environments for which the works were originally created.

Curators and conservators at the Nelson-Atkins have already begun to conduct studies of works in the Bloch Collection to further the scholarly knowledge around these masterpieces of French painting. Their findings will enhance understanding of the works, both for display and for the French painting collection catalogue. 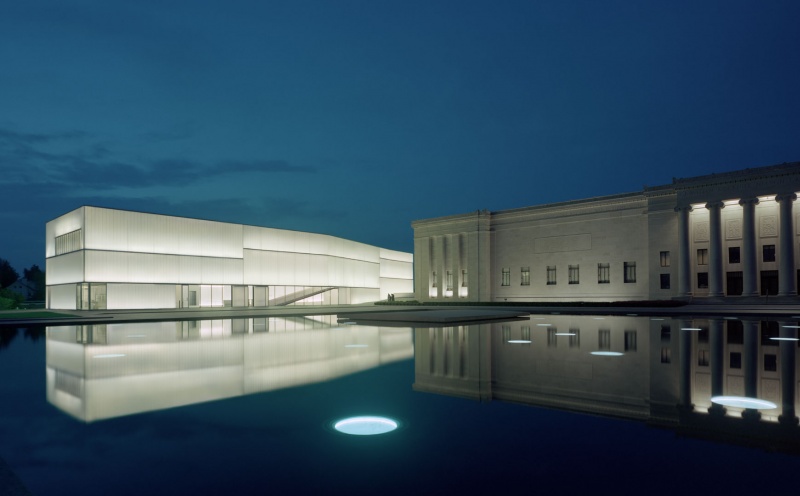