Through the latest gift-purchase agreement of Souls Grown Deep’s Collection Transfer program, the National Gallery of Art has acquired 40 works by 21 African American artists from the southern United States.

The major acquisition from the Foundation’s collection includes nine quilts by the artists of Gee’s Bend, Alabama, including Mary Lee Bendolph and Irene Williams; three paintings, three drawings, and one sculpture by Thornton Dial; works on paper by Nellie Mae Rowe, Henry Speller, Georgia Speller, and Royal Robertson; four sculpted heads by James “Son Ford” Thomas, which were featured in the National Gallery’s Outliers and American Vanguard Art exhibition (January 28–May 13, 2018); and three sculptures by Lonnie Holley. With this acquisition, the Gallery joins other prominent museums that have acquired works from the Souls Grown Deep Foundation including the Brooklyn Museum, the Fine Arts Museums of San Francisco, the Metropolitan Museum of Art, the Minneapolis Institute of Art, the Museum of Fine Arts, Boston, the Philadelphia Museum of Art, and the Phillips Collection.

The Souls Grown Deep Collection Transfer program was launched in 2014 to bring attention to these artists’ fundamental contribution to the narrative of American art history, manifested in exhibitions, publications, programming, and increased public awareness and appreciation. Funds received through artwork purchase support the Souls Grown Deep Community Partnership, which promotes economic empowerment, racial and social justice, and educational advancement in relevant regions, and the recently announced Resale Royalty Award Program, which bestows monetary awards to living artists who are part of the Foundation’s collection and whose works have since been sold through the Collection Transfer program.

“The addition of notable works by artists from our collection to the National Gallery of Art and other leading institutions signifies their essential inclusion in the canon of art history. Subsequent exhibitions, educational programs, and scholarship will expose new audiences to their artistic mastery and contemporary relevance,” said Maxwell L. Anderson, president, Souls Grown Deep Foundation and Community Partnership.

“These exciting works by artists from the American South demonstrate remarkable qualities of imaginative and conceptual daring and material inventiveness across a wide range of media and styles. In addition, many of these works offer powerful insights and perspectives on the compelling issues of our time, and we are pleased to be able to add them to our collection of modern and contemporary art,” said Kaywin Feldman, director, National Gallery of Art, Washington.

The acquisition includes nine quilts made by artists from Gee’s Bend—a small African American community along the Alabama River—where artists have created quilt masterpieces from recycled clothes and dresses, feed sacks, and fabric remnants for the last 100 years. Mary Lee Bendolph (b. 1935), one of the best known and most revered quiltmakers, uses complex geometric and color structures in an ingenious elaboration on the traditional practice of quilting in strips and blocks. In a quilt she made in 2002, rectangles of brown wool and blue denim are juxtaposed with brightly colored strips and squares that play off the structural framework of the "Housetop" pattern, a conventional design of concentric squares that is popular among the quiltmakers of Gee’s Bend. According to Bendolph, her works draw inspiration from the colors, shapes, and patterns of the world around her, resulting in designs that are abstract remappings of the visual environment. Of the many Gee’s Bend quiltmakers in the Souls Grown Deep collection, others included in the acquisition are Mary L. Bennett (b. 1942), Flora Moore (b. 1951), Lucy P. Pettway (1930–2003), Missouri Pettway (1902–1981), Sally Mae Pettway Mixon (b. 1965), Sue Willie Seltzer (1922–2010), and Irene Williams (1920–2015).

Several works by Thornton Dial (1928–2016) in a variety of media form another core part of this acquisition. Testing Chair (Remembering Bessie Harvey) (1995) is a throne-like chair engulfed by gold and silver roots constructed after the death of fellow artist Bessie Harvey. Other works by Dial commemorate the death of Princess Diana in 1997, including a drawing, The Last Trip Home (Diana’s Funeral) (1997), and a painting, Master of the Red Meat (1997). These were executed in series in the tradition of religious art cycles that memorialize the lives of holy figures. Two paintings, Refugees Trying to Get to the United States (1988) and Clothes Factory (1995), point to the struggles of migrants and the costs of industrialization.

Also included in the acquisition is a work by Dial’s son, Thornton Dial Jr. (b. 1953). A Man Can Be a Star (1988), made from paint, tin, carpet, sunglasses, and industrial sealing compound, depicts a figure representing Ray Charles seated in a bright red chair at a red piano against a stark white background studded with red stars.

Joe Light’s (1934–2005) Birdman Trainer (1987) depicts a human figure with birds perched on its head and shoulders. The composite figure (a possible self-portrait, since the birdman’s hair resembles that of the artist) gazes upward, becoming a kind of intermediary between heaven and earth. Purvis Young’s (1943–2010) Saints (late 1970s), depicting abstracted figures with halos, is a painting on found pieces of wood carefully chosen for their texture, color, and form. Young’s Untitled (mid-1980s) is an example of one of the books of colleges that the artist assembled from the many drawings he made of some of his favorite subjects: buildings in the Overtown neighborhood of Miami, Florida, funerals, horses, boats at sea, and people. Paintings by Ronald Lockett (1965–1998) and Mary T. Smith (1905–1995) are also included in this acquisition.

Among the acquired works on paper are two lively, patterned drawings by Nellie Mae Rowe (1900–1982) and two drawings each by husband and wife Henry Speller (1900–1997) and Georgia Speller (1931–1988), both of whom often drew sexually charged subjects derived from popular culture and television. Royal Robertson’s (1930–1997) Sevenly Out of Body Travels (1984) is an example of his drawn “visions,” a mythic combination of evangelism, science fiction, mass media, advertising images, and autobiographical motifs.

Four examples of the so-called “gumbo” clay heads and busts by James “Son Ford” Thomas (1926–1993) from the later 1980s are among the outstanding sculptural works included in the acquisition. Developed after years of producing sculptures depicting the human skull, Thomas’s Untitled Self-Portrait (1987) includes the raised eyebrow and distinct lines of the artist’s own features.

Three sculptures by Lonnie B. Holley (b. 1950) and two by Hawkins Bolden (1914–2005) create a rich personal cosmos from found objects. Holley paints, carves in sandstone, and assembles cast-off objects into sculptures that are a poignant meditation on (in his words) "what we as humans have to deal with"—knowing how to wield power, finding equilibrium among life’s tumults, or confronting larger-than-life forces. Holley’s haunting composition of found metal, bone, and dried flowers in The Boneheaded Serpent at the Cross (It Wasn’t Luck) (1996) is an important example. Bolden, blind since he was eight years old, collected his materials and stored them in the crawl space beneath his house in Memphis, Tennessee. When he was inspired to create, he hammered, cut, twisted, and bent these items into small, masklike objects. 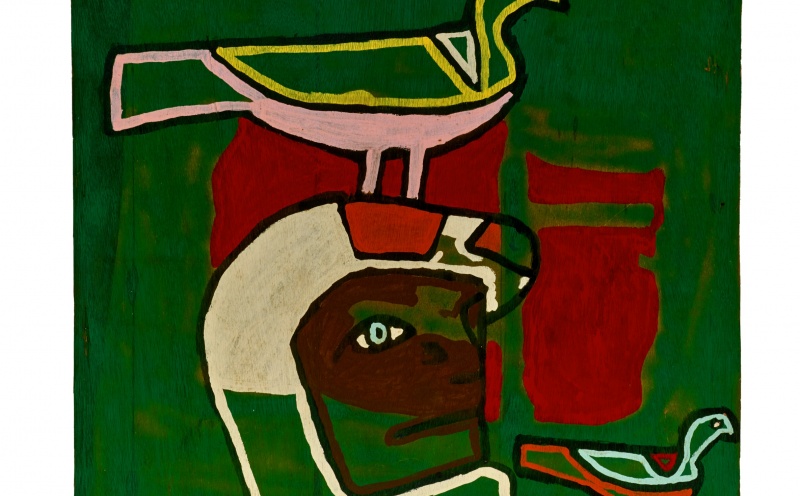