The new state-of-the-art cultural center is at once a performance hall, recording facility, broadcast studio, live music venue and museum—the first facility of its kind in North America and the first to be dedicated to music in Canada in all of its forms. Located in Calgary, Alberta, at the site of the legendary blues club in the historic King Edward Hotel, Studio Bell connects visitors with Canada’s rich musical history through live performances, exhibitions, and interactive education programs. Local audiences have been able to preview the new center through a phased launch of exhibitions and programs beginning in July, culminating in the institution’s programmatic and architectural completion at the end of October.

“The design for Studio Bell has been a truly collaborative process, and it has been thrilling to see our vision come to life,” said NMC President and CEO Andrew Mosker. “With the completion of Studio Bell,  the NMC is poised to become one of Canada’s most significant national institutions, inspiring new generations of musicians and music lovers and catalyzing the redevelopment Calgary’s East Village as a core urban district.”

“In its many diverse spaces, Studio Bell echoes the variety of musical performance,” said AWA Principal Brad Cloepfil. “Uniting audience and performer, student and teacher, the building creates instances of immersion, when the visitor is transported from daily life, and moments of transition between spaces, providing an opportunity for quiet contemplation. In our designs, we seek to create transformational spaces. For the National Music Centre, Studio Bell’s nine towers are modeled by gravity and acoustics, and together create a silent and powerful instrument that emanates music and light.”

Entering Studio Bell’s East Block, visitors are welcomed into a central lobby that opens upward through the building’s five levels. In the lobby, interactive exhibitions and live performances provide visitors with an introduction to the building’s many resources. Two helical staircases flank the lobby and fill the interstitial space between the towers. The main performance hall overlooks the lobby from the second floor, and serves as the building’s programmatic and structural center. With flexible seating and a movable acoustic wall, the 4,000-square-foot, 300-seat space can be closed for more intimate performances or opened fully to the lobby and circulation spaces to fill the entire building with music.

Exhibition galleries—called “stages” to reflect NMC’s music festival–themed visitor experience—are spread across Studio Bell’s five floors, showcasing highlights from NMC’s collection of over 2,000 musical instruments, artifacts, and artist memorabilia, which span more than 450 years of technology and innovation. Each stage is envisioned as a place for interaction, appreciation and performance, where Canada’s music story—past, present and future—can be further explored, encouraging visitors to engage in an ever-evolving discussion around music. Between each is a pause of space that allows the visitor to reflect and reconnect to the building and prepare for the next encounter.

Visitors begin their journey on the first floor with Canada Music Square, a live music performance space and a drop-in zone, where digital interactives provide an overview of the center’s attractions. The iconic Rolling Stones Mobile recording studio, a seminal and iconic piece of music technology, is situated in the buildings’ West Block and will be activated as part of the Centre’s artist residency program.

The second floor of Studio Bell is a mosaic of Canada’s music history and identity, and a celebration of the country’s diversity. Including the groundbreaking stories that have defined music in Canada—stories about inventors, industry pioneers, broadcasters, musicians and more—this level illustrates how Canada’s identity is reflected through music.

Using both interactive elements and collection highlights, the third level stages explore the physiological and emotional dimensions of music and its power to affect our mood and environment. The fourth floor offers visitors opportunities to play different instruments through a range of interactive displays—where professional or novice music-makers can create.

Ascending to the fifth floor, visitors arrive at “The Cloud” lounge, an open space that invites reflection and offers stunning views of the interior space. The fifth floor is also home to the Canadian Music Hall of Fame, the Canadian Country Music Hall of Fame Collection, and the Canadian Songwriters Hall of Fame. To the east, a large special exhibition space can be adapted to house traveling exhibits, workshops, and group performances. To the west, the East Village Skybridge spans 4th Avenue SE and connects back to the King Edward Hotel, binding the institution together. 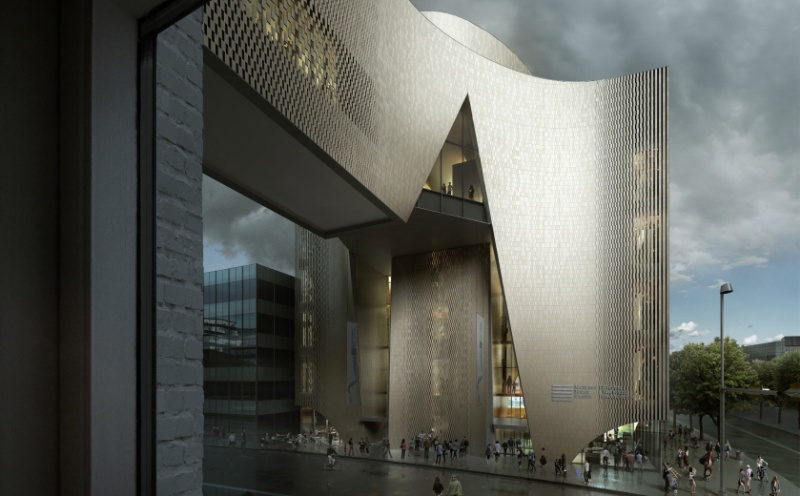