This summer Dia Art Foundation presents an exhibition of new work by Jacqueline Humphries at the Dan Flavin Art Institute in Bridgehampton, New York. On long-term view from June 22, 2019, through May 17, 2020, the exhibition introduces an entirely new body of work that builds upon Humphries’s black light paintings. For these, the artist illuminates fluorescent cast objects under black light, an innovative process that extends her work beyond the canvas and into the sculptural realm. The works on view have been created specifically for the space, in direct response to the permanent Dan Flavin installation at the eponymous institute. Humphries lives and works between New York City and the North Fork of Long Island.

“These remarkable new works by Jacqueline Humphries build upon her long-standing interests in fluorescence and the exploration of painting beyond two dimensions,” said Jessica Morgan, Dia’s Nathalie de Gunzburg Director. “I am delighted that visitors will be able to view this exhibition alongside our permanent Dan Flavin installation, and trace the conceptual conversation about color and light from the 1960s to the present day. Dia has an established tradition of supporting artists working in new and experimental directions, so it is fitting that this exhibition draws from our rich institutional history through its connections to the permanent Flavin installation, while simultaneously representing Humphries’s move into new territory. Reflecting on Flavin and Dia’s relationship with the legacy of cultural excellence in Bridgehampton and the surrounding areas, it is also a pleasure to once again invite an artist with a strong relationship to Long Island to present at the Dan Flavin Art Institute.”

Humphries began working with black light as a way to expand her interest in abstract painting amidst painting’s widely declared reputation as a “dead” medium in the 1980s. Starting in 2005, the artist began to explore the effects of ultraviolet light on pigments, creating her black light paintings, a body of work specifically intended to be viewed under those conditions. These works reengage a medium more associated with psychedelic art and 1960s counterculture than the avant-garde. The installed black lights not only cause pigments on the paintings’ surface to fluoresce, but also illuminate environmental elements such as lint and the whites of viewers’ eyes or teeth. The emanating glow creates a heightened awareness of the act of seeing and the experience of being seen.

At the Dan Flavin Art Institute, Humphries presents a significant new group of works, bringing together a series of fluorescent cast objects under black light. These objects were derived from a diverse array of natural and manmade sources, including paintings, found plywood and driftwood, and 3D-printed driftwood and seashells. Once cast in resin, the objects are then inflected using painterly means with surfaces ranging from ghost-like transparency to brilliant and opaque monochrome. Varying in scale, this series of illuminated castings signals a departure from the limitations of two-dimensional space. Humphries’s casts are arranged in an installation format—some free standing while others are situated on the wall.

Dia’s permanent installation of nine works in fluorescent light created by Dan Flavin between 1963 and 1981 will be concurrently on view on the second floor of the Dan Flavin Art Institute.

About the Dan Flavin Art Institute

Established by Dia Art Foundation in 1983, the Dan Flavin Art Institute is a renovated firehouse in Bridgehampton, New York, which holds a permanent installation of nine works in fluorescent light by Flavin and a first-floor gallery for changing exhibitions.

Planned by the artist for the second-floor gallery of the space, the permanent installation traces Flavin’s practice from 1963—when he began working solely with standard fluorescent fixtures and tubes—to 1981—just before the presentation was realized. In creating this exhibition, Flavin conceived of the architecture and sculptures as a single, unified installation. By manipulating the formal, phenomenal, and referential characteristics of light, the installation asks viewers to consider a series of contrasts—between colors and intensities of light, structure and formlessness, the obvious and the mysterious, and the serious and the humorous. 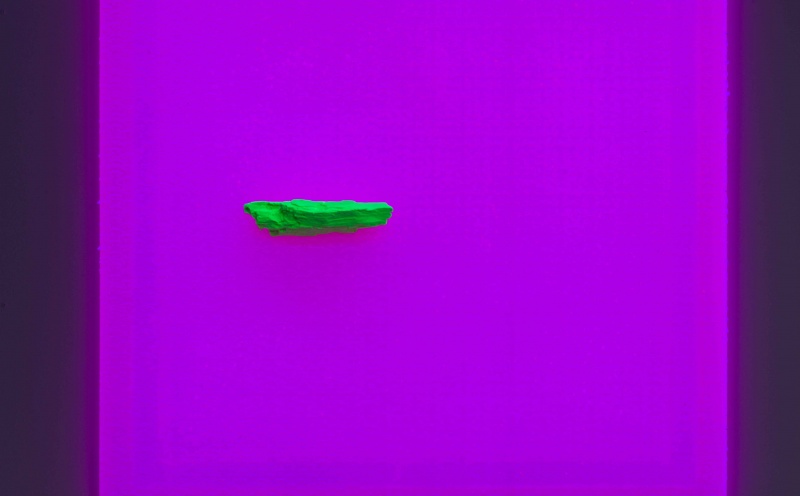