The partnership will build on the success of the residency’s first year which presented 28 performances across all five boroughs, at diverse venues from the 9/11 Memorial Museum and Lincoln Center, to public housing facilities in Brownsville, to homeless shelters in Queens, and libraries in Crown Heights, Flushing, Staten Island, and the Bronx. Co-produced with Brooklyn Public Library, the PAIR residency is made possible through a number of city partnerships and the generous support of the Stavros Niarchos Foundation. Through this new collaboration with The Greene Space at WNYC, Theater of War Productions will reach new audiences and expand the residency’s impact.

Theater of War Productions presents theater-based public health projects that incite robust community conversations inspired by the dramatic readings of ancient Greek tragedies and contemporary plays by acclaimed film, TV, and theater actors. Responses to these seminal works drive cathartic discussions that unveil connections and common experiences among audience members, deepening community bonds and inspiring positive action. Each program is tailored to specific audiences and seeks to address issues they face, from combat-related psychological injury and sexual assault to mental health and end-of-life care. At the Jerome L. Greene Performance Space, each monthly event will speak to a community-specific initiative that features a different cast, play, and discussion facilitators equipped to address issues that impact target audiences, including veterans and military families and individuals impacted by homelessness, addiction, gun violence, domestic violence, incarceration, and the failure of the legal system.

Building upon Artistic Director Bryan Doerries’ work as Public Artist in Residence (PAIR) with the NYC Department of Veterans’ Services and Department of Cultural Affairs, the collaboration with The Greene Space at WNYC will also unify partnerships with a range of other city agencies and organizations, including the Mayor’s Office to Combat Domestic Violence, the Department of Probation, and the Forum on Law, Culture & Society at NYU School of Law. Communities engaged in the first year of Doerries’ residency will be invited to join new audiences at the Greene Space to help elevate the conversations that were first sparked in theaters, playgrounds, and libraries across the city. These performances will form part of the 60+ events Doerries will bring to veteran and civilian communities across all five boroughs spanning the two-year PAIR appointment, which began in March 2017.

“We are thrilled to partner with The Greene Space at WNYC to expand our public residency and reach even wider audiences throughout New York City,” said Bryan Doerries, Artistic Director of Theater of War Productions. “These six performances, spread out over six months, represent a powerful conversation between diverse communities and across time. Working closely with The Greene Space at WNYC and our other partners, our aim is to generate healing dialogues in this divided time, creating a forum for the voices and perspectives of underserved New Yorkers to be seen and heard.”

Additional information on each project and a full schedule of upcoming performances at The Jerome L. Greene Performance Space at WNYC follows below:

Theater of War Productions will stage the company’s hallmark project for veterans and their communities, with a particular focus on those struggling with the experience of homelessness. With a target audience of residents and staff of shelters and transitional housing facilities, Theater of War uses Sophocles’ play to inspire timeless discussions about the invisible and visible wounds of war while increasing awareness about the unique challenges faced by veterans and others experiencing homelessness.

Drawing from an ancient Greek tragedy about a gruesome act of violence committed by an angry man with an invincible weapon, this project aims to generate dialogue between concerned citizens, members of the law enforcement community, victims and perpetrators of gun violence, and the general public about violence in our homes and communities today.

Presented in partnership with the Mayor’s Office to Combat Domestic Violence (OCDV), this presentation of Sophocles’ Ajax, an ancient play about the enduring impact of war, focuses on the role of Tecmessa, wife of the warrior Ajax, and convenes communities in a conversation on the war veterans bring home with them, raising awareness of the challenges faced by military families.

Aimed at audiences affected by the opioid crisis, as well their families and caregivers, this project is designed to raise awareness about substance abuse and addiction. Through a dramatic reading of Euripides’ Bacchae, a play about the arrival of Dionysus, the Classical Greek god of intoxication and ecstasy, the project spurs dialogue about the impact of substance abuse and addiction on individuals, families, and communities.

Taking on conversations about injustice in the American legal system, Theater of Law is a collaboration with the Forum on Law, Culture & Society at NYU School of Law. The project presents readings from Aeschylus’ Eumenides, a play that describes the first murder trial in the western world, to catalyze conversations about morality and justice in and out the court system, aiming to engage audiences who have in some way been disenfranchised by the law in constructive and compelling dialogue.

Addressing the challenges faced by individuals who have been incarcerated, on probation or on parole, or who have worked in correctional settings, Prometheus in Prison has been presented at various forums and correctional facilities worldwide, including Supermax prisons and in the detention camps of Guantanamo Bay. The project aims to raise awareness about the lasting impact of incarceration upon individuals, families, and communities, while humanizing people whose lives have been touched by the criminal justice system.

Each performance will be available to watch live via video stream and archived for on-demand viewing at thegreenespace.org, as well as on The Greene Space’s Facebook page. 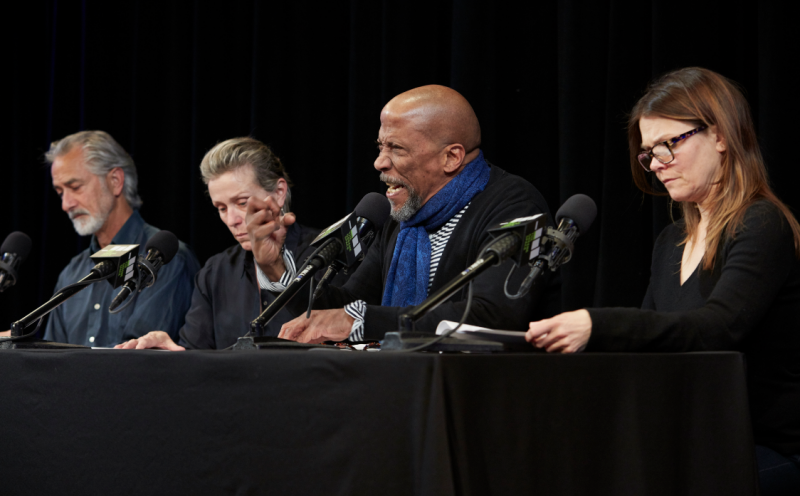