The Gordon Parks Foundation today announced the artists named as 2020 fellows: painter Nina Chanel Abney and photographer Tyler Mitchell. The artists have each been awarded $20,000 to support new or ongoing projects that reflect and draw inspiration from the themes of representation and social justice. Each project will culminate in exhibitions at the Gordon Parks Foundation Gallery in Pleasantville, NY, presented over the next two years. Awarded annually, the fellowships demonstrate the Foundation’s commitment to advancing Parks’ extraordinary vision and legacy of social change through the arts and humanities.

“The Gordon Parks Foundation Fellowship program is an important means of continuing Parks’ legacy through the support of artists working for social change and across disciplines,” said Peter W. Kunhardt, Jr., Executive Director of The Gordon Parks Foundation. “Both Nina and Tyler have established themselves as pioneers through both their aesthetic and social practices, and we are proud to play a role in building on their artistic contributions and enabling their future projects.”

The Gordon Parks Foundation Fellowship program draws inspiration from the significant role of a fellowship Parks received early in his career. In 1941, he was the first photographer to be named a fellow of the Julius Rosenwald Fund, which was founded in 1917 to support African Americans whose work focused on social issues and education. The fellowship allowed Parks to move to Washington, D.C., and apprentice for one year under Roy Stryker at the Farm Security Administration—launching his seven-decade career as photographer, filmmaker, writer, and humanitarian.

Now recognized as one of the most significant photographers of the 20th century, Parks showed the face of American poverty with empathy and dignity, using the arts to champion social change. Abney and Mitchell have taken up a similar responsibility in their practices, and their fellowship projects reflect each artist’s commitment to illuminating important social and political issues of today.

Visual artist Nina Chanel Abney is an adept observer of contemporary life who has created a distinctive visual language and aesthetic that is rooted in political discourse. Combining representation and abstraction, Abney’s paintings capture the frenetic pace of contemporary culture, investigating subjects as diverse as race, celebrity, religion, politics, sex, and art history. Her work has been exhibited at institutions around the world from Palais de Tokyo (Paris) to The Whitney Museum of American Art (New York) and is held in important private and public collections. A major exhibition of her work is currently on view at Institute of Contemporary Art, Boston through March 2020 and she will present an exhibition at The Gordon Parks Foundation in 2021.

“I am honored to serve as a Gordon Parks Foundation Fellow for 2020,” said Abney. “Gordon Parks’ approach to image-making and his other artistic contributions have meant a great deal to my own practice and I look forward to the chance to consider his legacy and impact in more depth this coming year.”

Similar to Parks, Tyler Mitchell’s practice exists at the intersection of photography, fashion, art, and film, and is recognized for exploring and subverting black male stereotypes. In 2018, he made history as the first black photographer to shoot the cover of Vogue, and in August 2019, Mitchell’s portrait from this series was acquired by The Smithsonian National Portrait Gallery for its permanent collection. During his fellowship, Mitchell will create two new bodies of work, drawing from Parks’ fashion images from the 1940s through the 1970s. He will also mine the archive to explore Parks’ understanding of dress and identity. The two projects will culminate in an exhibition at the Foundation.

“Gordon Parks has made so much possible in the current landscape of photography and fashion. By blending genres to expand on the lexicon of what black life looks like, he set the precedent for what I’m doing now. I couldn’t be more excited to be a Gordon Parks Foundation Fellow and have the opportunity to explore his legacy in more depth,” said Mitchell.

Since 2017, the Foundation has granted two Gordon Parks Foundation Fellowships each year to support photographers, artists, filmmakers, and musicians in the development and exhibition of new and ongoing projects. Applications are reviewed on the merit of their quality, creativity, and the project’s potential to contribute to the legacy of Gordon Parks—through its exploration of themes of representation and social justice, or its engagement with the role of Parks in the artistic, social, historical, or cultural events of his time. During the fellowship period, fellows serve as ambassadors on behalf of the Foundation and promote the legacy of Gordon Parks, including participation in a wide range of Foundation initiatives and programs throughout the year, and contribution of an artwork to the Foundation’s permanent collection.

2020 marks the fourth year of the fellowship program and the cumulative support of eight fellows, including Guadalupe Rosales and Hank Willis Thomas in 2019, Derrick Adams and Deana Lawson in 2018, and Devin Allen and Harriet Dedman in 2017. The Foundation’s educational initiatives, including fellowship and scholarship programs, are made possible through The Gordon Parks Arts & Social Justice Fund, dedicated to providing vital support and championing current and future generations of artists and humanitarians whose work carries on the legacy of Gordon Parks. The Fund is supported by the donations of individuals, corporations, and foundations.

Combining representation and abstraction, Nina Chanel Abney’s paintings capture the frenetic pace of contemporary culture. Broaching subjects as diverse as race, celebrity, religion, politics, sex, and art history, her works eschew linear storytelling in lieu of disjointed narratives. The effect is information overload, balanced with a kind of spontaneous order, where time and space are compressed and identity is interchangeable. Her distinctively bold style harnesses the flux and simultaneity that has come to define life in the 21st century. Through a bracing use of color and unapologetic scale, Abney’s canvases propose a new type of history painting, one grounded in the barrage of everyday events and funneled through the velocity of the internet. Abney was born in Chicago and currently lives and works in New York. Her work is included in collections around the world, including the Brooklyn Museum, The Rubell Family Collection, Bronx Museum, and the Burger Collection, Hong Kong.

Tyler Mitchell (b.1995, Atlanta GA) is a photographer and filmmaker based in Brooklyn, working across many genres to explore and document a new aesthetic of blackness. Mitchell is regularly published in avant-garde magazines and commissioned by prominent fashion houses. In 2018 he made history as the first black photographer to shoot a cover of American Vogue for Beyoncé’s appearance in the September issue. In 2019 Mitchell’s portrait from this series was acquired by The Smithsonian National Portrait Gallery for its permanent collection. His first solo presentation I Can Make You Feel Good at Foam Fotografiemuseum, Amsterdam (2019) premiered video works including Idyllic Space. Mitchell has lectured at Harvard University and The International Center of Photography, New York, on the politics of image making.

The Gordon Parks Foundation supports and produces artistic and educational initiatives that advance the legacy and vision of Gordon Parks—recognized as the most significant African American photographer of the 20th century, as well as a writer, musician, and filmmaker, who used the arts to further “the common search for a better life and a better world.”

Through exhibitions, publications, and public programs organized in collaboration with national and international institutions at its exhibition space in Pleasantville, New York, the Foundation provides access to, and supports understanding of, the work and contributions of Gordon Parks for artists, scholars, students, and the public. Through its year-round educational programming and annual grant-making initiatives, the Foundation champions current and future generations of artists and humanitarians whose work carries on Parks’ legacy.

Gordon Parks, one of the greatest photographers of the twentieth century, was a humanitarian with a deep commitment to social justice. He left behind an exceptional body of work that documents American life and culture from the early 1940s into the 2000s, with a focus on race relations, poverty, civil rights, and urban life. Parks was also a distinguished composer, author, and the first African American filmmaker to helm a studio film. His celebrated artistic work includes photographs taken for the Farm Security Administration (FSA), the Office of War Information (OWI), Life, Glamour, and Ebony, as well as his literary work, including the novel The Learning Tree, which he adapted, directed, and scored as a film, and his direction of the feature film Shaft (1971). Parks’ work is held in the permanent collections of major museums across the United States. 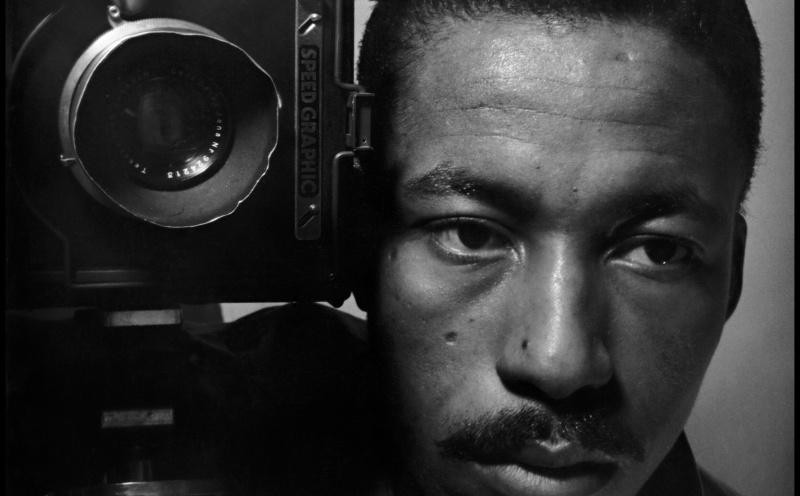