Norton Announces 2021 Program, Featuring Two New Artists in Residence, María Berrío’s Exhibition for the 8th Annual Recognition of Art by Women, and a Presentation of Jose Alvarez’s Portraits from his Incarceration in an Immigration Detention Center

Today, the Norton Museum of Art announced its exhibition program for the first half of 2021 featuring exhibitions exploring immigration, systemic injustice, and racialized violence. Through solo presentations, curated selections from its collection, and its artists-in-residence program, the Norton is creating platforms for emerging and mid-career artists that illuminate diverse perspectives and provide engaging experiences for its audiences. To kick off its 80th anniversary, the Norton will present María Berrío: Esperando mientras la noche florece (Waiting for the Night to Bloom); Jose Alvarez (D.O.P.A.): Krome; Art Finds a Way; and Celebrating the Norton: Eighty Years. In the coming months, the Museum will announce its reopening date and new health and safety guidelines.

For the second year of its recently launched artist-in-residence program, the museum will host María Berrío and Jessica Ingram in January and February in homes on the museum’s campus.

“We can’t wait to welcome our community back into the Museum,” said Bruce Gendelman, Chairman of the Board of Trustees and acting CEO of the Norton. “We will announce the opening date in the near future, and look forward to celebrating our 80th year with presentations of new work and outstanding works drawn from our far-ranging collections. Until we can welcome visitors in person, our expanded Norton From Home resources offer inspiration and engaging programming to those who miss the museum as much as we do.”

“Our 2021 season reenforces the power of art to address universal concerns. Art provides ways to understand and engage with contemporary issues, often through work that reveals artists’ insights and awareness of their own struggles with identity, immigration, and racial injustice. It is an exceptional moment – in the midst of our country’s confrontation with racism, in the face of the ongoing effects of the pandemic – and these exhibitions remind us of art’s power to engage the viewer, inspire empathy, and, even, action.” said Cheryl Brutvan, Director of Curatorial Affairs and Glenn W. and Cornelia T. Bailey Curator of Contemporary Art.

On view January 2 through May 9, 2021, María Berrío: Esperando mientras la noche florece (Waiting for the Night to Bloom) marks the artist’s first solo museum survey, and the eighth exhibition of the Museum’s celebrated Recognition of Art by Women (RAW) series. Esperando mientra la noche florece features the Brooklyn-based, Colombian-born artist’s large-scale collages, in which she reflects on issues of immigration and nature’s vulnerability through interior, domestic scenes and fantastical settings. The Norton’s presentation includes nearly 20 pieces created from 2013 to today, including works on public display for the first time.

Berrío intricately layers Japanese papers to construct scenes populated by women in lush landscapes and modest interiors. Her work explores contemporary themes of displacement through a visual vocabulary that employs both lifelike depictions and magical realism. The evolution of her work from fantastic to realistic environments focuses on the theme of survival and other universal struggles, with images of women and the natural world to offer hope as she reflects on the effects of this extraordinary time in our existence.  Inspired by her own family’s history leaving her native Bogotá, Colombia, Berrío promotes the resilience of women – as mothers, daughters, sisters, and friends – whose strength and compassion is the only means for families to endure separation and an uncertain future, urging viewers to find connection across cultures and experiences.

Organized by Cheryl Brutvan, who has curated the RAW series since its inception in 2011, the exhibition follows solo presentations of work by Jenny Saville (2011), Sylvia Plimack Mangold (2012), Phyllida Barlow (2013), Klara Kristalova (2014), Njideka Akunyili Crosby (2016), Svenja Deininger (2017), and Nina Chanel Abney (2018). RAW celebrates the work of emerging and mid-career women artists and is made possible through the Leonard and Sophie Davis Fund/MLDauray Arts Initiative.

Coinciding with her exhibition, Berrío will be one of two Artists-in-Residence at the Museum this year in January and February 2021. Photographer Jessica Ingram, a Nashville native whose work explores the ethos of communities and notions of progress and resistance in American culture, will also participate in the Norton’s residency program. The Norton launched this annual program, which provides four artists residencies, concurrent with the opening of its expanded home in 2019, with two residencies dedicated to female artists, and an endowed Mary Lucille Dauray residency for a woman of color. Each artist is invited to live and work in a recently renovated, 1920s-era cottage on the Museum’s campus, which includes dedicated studio space. During their residencies, which are extended by invitation only, Berrío and Ingram will create, study, and assess their artistic practice. Each artist will lead at least one educational program, which may take the form of a public lecture, critique for art students, master classes, and/or open studio days

Jose Alvarez (D.O.P.A): Krome (January 2 – May 9, 2021) showcases a moving selection of nearly 30 ink portraits created by Venezuelan, South Florida-based artist Jose Alvarez during his time in Miami’s Krome immigration detention center in 2011. The artist, who was arrested for passport fraud after his visa expired, completed a series of portraits of fellow detainees while fighting for his freedom. The subjects’ personal histories will be presented alongside their portraits. At the time of Alvarez’s detention in 2011, his large-scale, site-specific installation Vibrating Strands of Energy was on view at the Norton as part of Altered States (April 2 – July 17, 2011), a major group exhibition.

In addition to these solo presentations, the Norton will present curated examinations of its collection, the leading collection in the region. On view January 2 through May 30, 2021, Art Finds a Way features work by artists including Nina Chanel Abney, Kara Walker, Hank Willis Thomas, Faith Ringgold, and others, whose art references historic and personal experiences as well as popular culture and the media to address persistent contemporary issues of racial injustice. A section of the exhibition will be devoted to art that may be interpreted differently during this time, offering solace and reflection as we endure the COVID-19 pandemic, including work by Njideka Akunyili Crosby, Dan Flavin, and Jaye Rhee among others. Celebrating the Norton: Eighty Years (February 5 – June 13, 2021) features a selection of acquisitions and archival materials that tells the story of the Norton Museum including never-before-seen documents, photographs, and highlights from the collection. This exhibition is the result of the research completed by the Museum’s first Archivist, Marie Penny, who has assembled significant discoveries, which will be alongside works from the collection representing key acquisitions.

Jose Alvarez (b. 1963, Deyvi Orangel Peña Arteaga) is a Venezuelan artist who currently lives and works in South Florida. He graduated from the School of the Visual Arts in 1995. Alvarez began his career by making a name for himself through charismatic performances "channeling" the 2,000-year-old spirit of a shaman named Carlos. In front of live audiences around the world, Carlos' performances and media broadcasts have been viewed by millions of people in the United States, China, Australia, Europe, and South America. These performances were the subject of a video work presented in the 2004 Whitney Biennial curated by Lawrence Rinder and at The Kitchen in New York curated by Debra Singer. He has performed at the NASA Johnson Space Flight Center, as well at the Parkes Radio Telescope in Australia.

Alvarez has since expanded his artistic practice to encompass different, tangible mediums including works-on-paper, mineral crystal paintings, wall murals and video works; this multidisciplinary approach affords the artist a deeper exploration into the intersection of mysticism, science, and spirituality, fostering further examination of the construction of belief systems and how they all connect to the strong human desire for knowledge and transformation. His use of collage incorporates shamanistic materials such as feathers, porcupine quills, and crystals with fine art staples such as watercolor, acrylic paint, enamel, and handmade paper. In addition, the more contemplative side of Alvarez’s work is represented in the artist’s minimal 'paintings:' textured works made entirely of shaved mineral crystal. Alvarez’s formal reach also includes expansive vinyl wallpaper, large-scale murals, and animated video installations. Alvarez’s abstract animations are the opulent accompaniment to Alvarez’s collages and paintings, coupling voluptuous swells of colorful shapes with hypnotic sound. Much like his radiant wall murals, organic forms in the animations melt and undulate in and out of one another, creating a peaceful yet hallucinatory atmosphere.

Her work can also be seen in the public realm. MTA Arts & Design recently commissioned Berrío to create a mural for the N subway stop at Fort Hamilton, Brooklyn, where 14 of the artist’s works have been translated in mosaic using a variety of media including glass, ceramic and enamel, which were unveiled in 2019. Last year she also completed a mural, The Augur, for Princeton University’s Firestone Library.

About the Norton Museum of Art

The Norton Museum of Art is home to the leading and most far-ranging collection of art in Florida and the region, with distinguished holdings in American, European, Contemporary, and Chinese art and Photography. In 2019, the Norton unveiled an expansion by Foster + Partners, featuring the new 59,000-square-foot Kenneth C. Griffin Building, which greatly enhanced the Museum’s facilities and was accompanied by the complete reinstallation of the museum’s renowned collections in state-of-the-art galleries.

The Norton is also recognized for advancing the practice and appreciation of emerging and under-recognized artists. In 2011, the Norton launched RAW (Recognition of Art by Women). Since its inception, the series has presented the work of Jenny Saville, Sylvia Plimack Mangold, Phyllida Barlow, Klara Kristalova, and Nina Chanel Abney. In 2012, the Norton established the biennial Rudin Prize for Emerging Photographers in partnership with Beth Rudin DeWoody, which honors photographers nominated by noted practitioners. In January 2020, the Museum launched an artist-in-residence program, which hosts four artists annually who are literally in residence in restored homes that border the Museum’s campus.

The expansion of the Norton also provided new and enhanced facilities for its educational programs, special exhibitions, lectures, tours, and other activities that serve the Museum’s diverse audiences. It also transformed the Norton’s 6.3-acre campus into a “museum in a garden” which celebrates the beautiful year-round weather in West Palm Beach and features new, verdant public spaces and a 37,000-square-foot sculpture garden. 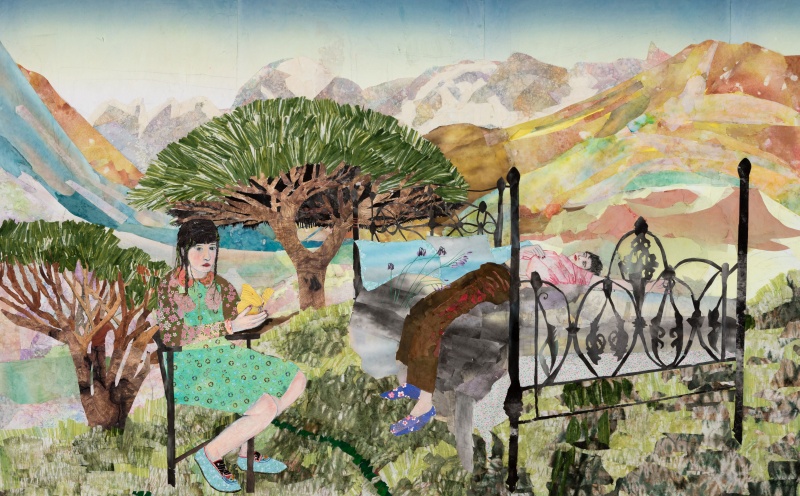