Launched in 2015 by the Department of Cultural Affairs, the PAIR program fosters the development of creative solutions to civic challenges by integrating artists into the work of City government. In 2017, Bryan Doerries was selected to be a NYC PAIR with the Department of Veterans’ Services based on his work as artistic director and co-founder of Theater of War Productions, which presents projects that combine theater and community conversations to address urgent public health and social issues. Over the course of his residency, Doerries will stage over 60 free performances in venues across all five boroughs of New York City. The first performance occurred in March 2017, and programming has since continued in all five boroughs. The residency is made possible by a $1.365-million grant from the Stavros Niarchos Foundation, and is co-produced by Brooklyn Public Library as part of its mission to engage diverse communities in discussions on the urgent issues of our time.

The next phase of Doerries’ residency includes a performance of Antigone in Ferguson presented at Howard Playground, adjacent to Brooklyn Public Library’s Brownsville branch on July 15, 2017, featuring four former cast members from HBO’s The Wire: prominent actors Reg E. Cathey (House of Cards), Sonja Sohn (Body of Proof), Deirdre Lovejoy (Shameless), and Frankie Faison (Silence of the Lambs). The project seeks to bridge the divide between law enforcement and communities of color in the United States. Theater of War Productions will present a reading of Sophocles’ Antigone accompanied by gospel music performed by an ensemble choir made up of police officers, activists, educators, and members of the faith community from St Louis and Ferguson, MO, as well as Brooklyn and Queens residents. The performance will be followed by an interactive public forum that will foster greater understanding about the ramifications of the tension between law enforcement and the Brownsville community.

In partnership with OCDV, the residency will also offer programs designed to prevent and address the impact of domestic violence on individuals, families, and the community at large. Projects include:

• A presentation of The Tecmessa Project at the David Rubenstein Atrium at Lincoln Center, featuring a reading of Sophocles’ seminal play Ajax. The reading is followed by a discussion on domestic violence in military communities through an examination of the play’s character Tecmessa, the wife of the warrior Ajax;

• A performance of TAPE, Theater of War Productions’ project on consent and the power dynamics surrounding sexual assault for a special mentor training program for the NYC Department of Social Services’ Relationship Abuse Prevention Program (RAPP)—one of the most extensive domestic violence prevention programs in New York City that is critical to ending relationship abuse among young people; and

• Theater of War Productions’ Domestic Violence Project: A Streetcar Named Desire, which utilizes Tennessee Williams’ play as a lens to explore the complexity of abusive relationships.

“The Mayor’s Office to Combat Domestic Violence is thrilled to partner with Theater of War Productions in order to raise awareness about domestic violence through the art of performance,” said NYC Mayor’s Office to Combat Domestic Violence Commissioner Cecile Noel. “Theater of War Productions and Bryan Doerries provide a safe space to engage participants on the subject of domestic violence through the arts, as well as a platform for critical discussion and communal healing. We are grateful for our partners at the NYC Department of Cultural Affairs and the NYC Department of Veterans’ Affairs who have helped us bring Theater of War’s innovative and creative approach to public education to New Yorkers throughout the five boroughs.”

“Theater of War Productions’ work as part of the Public Artists in Residence program has created a powerful tool that brings communities together through compelling artistic experiences and helps address the struggles of our city’s most vulnerable communities,” said Cultural Affairs Commissioner Tom Finkelpearl. “We are thrilled to see this project grow to bring even more New Yorkers together. The important work by Bryan Doerries and our PAIR partners at the Department of Veterans Services and Brooklyn Public Library will now connect with survivors of domestic violence, homeless New Yorkers, and so many more from veteran and civilian communities. I’ve witnessed the power of these programs to confront urgent issues facing our city, and to forge new connections between veterans and the broader community.”

“The challenges our veterans face every day are complex and broad. Domestic violence and homelessness impact military and civilian communities alike, reflecting painful realities which are too often hidden or ignored,” said Brigadier General (Ret.) Loree Sutton, MD, Commissioner of the Department of Veterans’ Services. “We are honored to be deepening our work with our Public Artist in Residence by addressing these pressing concerns. Seeing the work of Bryan Doerries and Theater of War Productions take shape across the city has been inspiring, and we look forward to continuing this residency’s vital role in cultivating novel means of community awareness, connection, engagement, and action through culture and the arts.”

“Theater of War Productions enables people to grapple with very difficult issues in their lives, and share experiences that build understanding and healing,” said Brooklyn Public Library President and CEO Linda E. Johnson. “BPL is expanding the role libraries play in their communities, and we are very proud to collaborate with the Department of Cultural Affairs, the Department of Veterans’ Services, Bryan Doerries, and new partners such as the Mayor’s Office to Combat Domestic Violence, to bring this inspiring project to our borough and City.”

“Theater of War Productions employs live theater to generate empathy and understanding among diverse audiences and communities through discussion and exchange,” said Bryan Doerries. “I am honored, as a Public Artist in Residence for the City of New York, to use our works as a starting point for conversations in communities dealing with a wide range of challenges in all five boroughs. We look forward to working with new partners such as the Mayor’s Office to Combat Domestic Violence and deepening our work with community-based organizations to broaden the reach of this residency.”

During the first phase of his residency, Doerries staged six performances of the company’s hallmark project Theater of War, which presents readings of Sophocles’ Ajax and Philoctetes to military and civilian communities, followed by conversations around the enduring and wide-ranging impact of war. Events were staged in venues in all five boroughs, from a theater in the Bronx to a chapel at the US Coast Guard station in Staten Island. During the launch period of the residency, Doerries also presented the premiere of The Drum Major Instinct, which was commissioned by BRIC for its inaugural OPEN Festival. The event combined a dramatic reading of Dr. Martin Luther King’s final sermon and a newly composed work for a gospel choir to spark a powerful discussion about racism, inequality, and social justice. To date, PAIR events have engaged over a thousand community members across Manhattan, Queens, Brooklyn, Staten Island, and the Bronx. 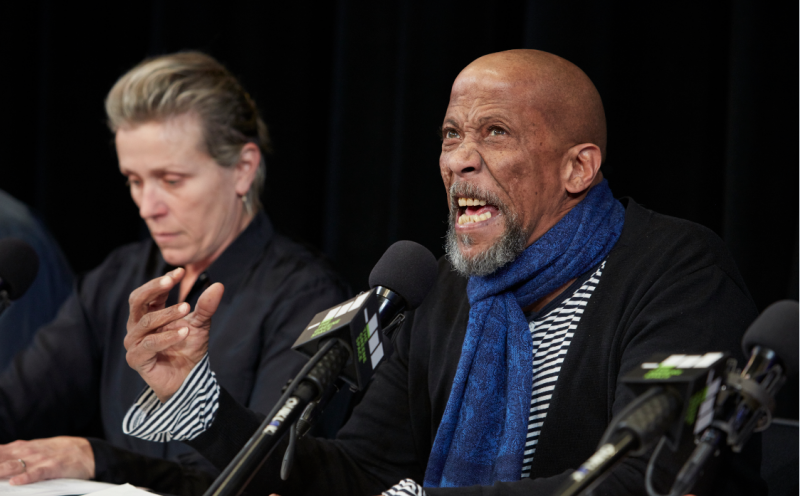