A day before unveiling of his FLAG Art Foundation exhibition, “Pastel,” the New York-based, Swiss-born artist Nicolas Party was drenched in pastel hues of green and blue, almost blending into the luscious garden he was busy creating on one of the walls in his exhibition’s many custom-built, labyrinthine galleries. The archetypical image of a paint-covered young artist proudly standing amidst paint tubes and sketches suited the 39-year old, who started the year with a solo exhibition at the Modern Institute in Glasgow and later was named one of the youngest on mega gallery Hauser & Wirth’s roster. With a “very Swiss” ease, he compared a printout of his source material—Rococo master Jean Honoré Fragonard’s 1773 painting The Progress of Love—with his immersive mural version, for which he chose to focus on the painting’s upper section with tress, clouds and fountains intermingling in a heavenly aura.

Party’s current exhibition is his first solo in this city since 2012 and an experimental one, combining his whimsical pastel paintings of voluptuous forms and psychedelic perspectives with pastel works he selected from a host of intergenerational artists as broad as Impressionist master Degas, American Impressionist Mary Cassatt and contemporary darling Louis Fratino. The approach here is “if less is more, more is even more,” with adjacent galleries covered in lush shades of greens and purples, arches painted in contrasting hues akin to singular rainbow stripes, and paintings hung onto pastel murals replicating paintings of Fragonard or François Boucher.

Party’s aesthetic lexicon does justice to his last name, radiating inclusive visuals and narratives that can zoom across a wide range of audiences, pulling them into his unabashedly joyful fete. A sense of abandon and jubilance meanders through his pastel portraits of red-haired and green-skinned eccentrics and their bug-eyed, deadpan bust replicas with glossy veneers. He places them between party-colored walls that echo his subjects’ alien skin tones as well as an otherworldly land of possibilities.

But beyond the escapism, Party has a pointed line of investigation. The pompous formalism of art history casts a light on the sharply-drawn borders of social constructs surrounding norms, class and identity. His large-scale busts of gender-neutral figures are detached from racial, economic or psychological  connotations, complimenting his paintings of natural vistas that subvert the geometric precision of Minimalism with the gaiety of childhood in inviting colors. It’s no wonder Party was RxArt‘s pick to cover the 207-foot Operating Department hallway at the Children’s Hospital Los Angeles. The New York-based non-profit has been collaborating with internationally-recognized artists to place museum-quality murals in children’s hospitals across the United States for nearly twenty years. Following their collaborations with a diverse span of sixty artists including Rob Pruitt, Nina Chanel Abney, Ed Ruscha, Dan Colen and most recently the Keith Haring Foundation, RxArt asked Party to bring glee to a blank corridor that 16,000 children pass through every year on their way into surgery.

The artist’s lineup of trees in entertaining shapes and colors attempts to assure the existence of hope and exuberance even in the darkest times, and adds a breath of air through its soothing hues and cozy textures. “Party will completely transform this long walk with his incredible palette of colors and fantastical landscape, and the hope is to change this challenging walk into one that stimulates imagination in the most positive way,” explained RxArt Founder and President Diane Brown to Observer, adding, “It is impossible to look at Party’s work without entering into his colorful and wondrous world.”

RxArt also celebrated the mural, which is slated to be unveiled next year, and the artist in its annual gala on October 16, and honored Party with The RxArt Inspiration Award, alongside Heather Hasson, Co-Founder of FIGS, a medical apparel company currently collaborating with artist Urs Fischer and RxArt to create amusing scrubs for children. Hirshhorn Museum Chief Curator Stéphane Aquin, who organized an exhibition titled “Sunrise, Sunset” with Party in Washington D.C. in 2017, handed the artist his award, summing up his practice in perhaps the most succinct way possible: “Nicolas hops through all the routes of art history, from Delacroix to Picasso and then to David Hockney,” he said. “He overlooks what other artists or history consider important and takes the liberty to pick what he believes is important.” 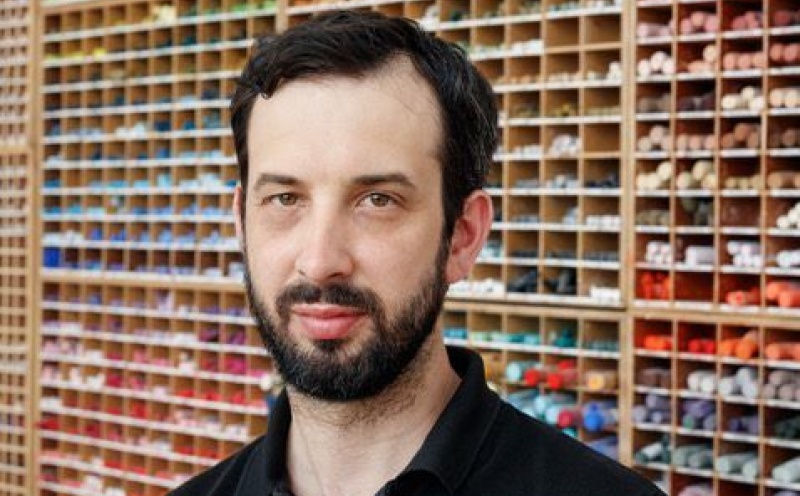 Other news about RxART