Created during quarantine and originally commissioned by Magazzino as part of "Homemade," Video Explores the Revitalizing Impact of COVID-19 on the Natural World

Magazzino Italian Art presents an outdoor screening of Francesco Simeti’s Unrelenting (2020), a five-minute video work exploring how the absence of humans allowed animals and plants to reclaim spaces in the natural world. Set to a new score created in collaboration with composer Chris Cerrone, the video also considers humans’ retreat indoors and eventual reliance on technology to connect with the external world. By incorporating hand-drawn and found images of plants and new video production technology, Unrelenting depicts the expansion of diverse plant life and moments of overlap, creating mysterious and unfolding compositions that mirror our inspection of nature at this critical juncture.

Unrelenting was commissioned by Magazzino as part of Homemade, a digital  initiative launched to inspire New York-based Italian artists to create new work during the global quarantine that culminated in an exhibition of the final works at Magazzino this summer. The screening is hosted in conjunction with the NYC Mayor’s Office for International Affairs and the Consulate General of Italy in New York.

Francesco Simeti (b. 1968, Palermo, Italy) is an artist known for his site-specific installations, which aesthetically present enchanting scenes that reveal a darker subtext upon closer inspection. His work often appropriates photographs from newspapers and magazines to raise questions about the role of images in contemporary discourse. Public art is a fundamental aspect of his practice; he has worked with Percent for Art and Public Art for Public Schools in NYC, the Multnomah County in Oregon, and has created permanent additions to subway stations in Brooklyn and Chicago. He has had solo exhibitions at venues such as Assembly Room, New York, (2019); Open Source Gallery, New York (2017); Galleria d’Arte Moderna, Palermo (2012); and Artists Space, New York (2009). His work has been included in group exhibitions at Museo Civico di Castelbuono, Palermo (2019); ICA Singapore (2017); Palazzo Reale, Milan (2016); and Castello di Rivoli Museum of Contemporary Art, Turin (2014). He has also exhibited work at the Triennale di Milano (2014 and 2013). Simeti lives and works in New York. 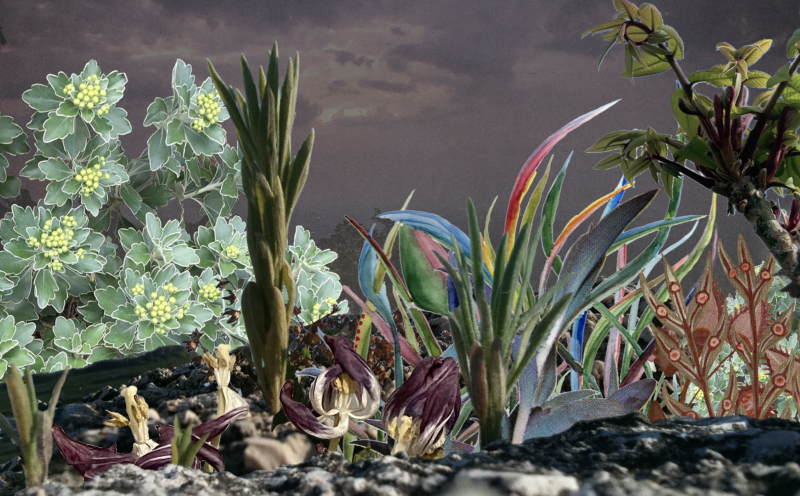