Three extant bronze portraits of Publius Aelius Hadrianus—better known as the Emperor Hadrian (117 – 138 CE), one of the boldest and most accomplished rulers of the Roman Empire—are brought together for a first-time display in the Israel Museum’s Archaeology Wing, marking a symbolic return of the Emperor to Jerusalem, whose last visit to the city was in 130 CE. Opening December 22, Hadrian: An Emperor Cast in Bronze, concludes the Israel Museum’s celebrations of its 50th anniversary throughout 2015, and is among a series of special displays spotlighting masterworks from sister institutions loaned in tribute to the Museum and presented in dialogue with works from the Museum’s own holdings.

Of the many bronze portraits of Hadrian that are known to have existed, only three survive. The Israel Museum’s bronze, which was found in a Roman legion camp near Beth Shean in the north of Israel, depicts the emperor in military garb with beautifully preserved body armor. It is flanked by two other extraordinary examples: one from the British Museum found in 1834 in the river Thames, which may have been created to commemorate Hadrian's visit to Britain in 122 CE; the other, from the collection of the Louvre, considered to have originated in Egypt or Asia Minor. Such portraits offered an important means in their time for conveying imperial authority, with statues being erected as civic and military monuments to reinforce the breadth of the Emperor Hadrian’s rule.

The return of Hadrian to Jerusalem celebrates in a way the emperor's last visit to Judea in 130 CE, contextualized through the first-time presentation of a monumental Latin dedicatory inscription erected by the 10th Roman Legion in Jerusalem in that same year. One section of the inscription was unearthed in 1903, and the other was discovered during recent excavations in 2014 by the Israel Antiquities Authority. The two parts of the inscription are joined here for the first time, on loan from The Israel Antiquities Authority and the Studium Biblicum Franciscanum Museum, Jerusalem.

“As we conclude the year-long celebrations of our 50th anniversary, we are especially grateful for our meaningful partnerships with the Louvre and the British Museum, whose loans serve as a powerful metaphor for the international and inter-cultural connections we have fostered throughout the Museum’s history,” said James S. Snyder, Anne and Jerome Fisher Director of the Israel Museum. “The dialogue with our own Hadrian created by the adjacency of these visiting masterpieces is quite extraordinary, and we look forward—especially in the complex times in which we live today—to continuing this essential level of cultural collaboration with sister institutions internationally, illustrating the remarkable and remarkably continuous history of world culture that we preserve and share together.”

“Following our loan of Princess Hélène of Adiabène’s sarcophagus in 2011, which had never left France previously, the inclusion of the Louvre's Hadrian bronze portrait in this display signifies the cooperation between the Musée du Louvre and the Israel Museum and demonstrates the desire to develop even stronger ties,” said Jean-Luc Martinez, President and Director of the Musée du Louvre.

Neil MacGregor, Director of the British Museum said, "When the British Museum mounted its exhibition, Hadrian: Empire and Conflict in 2008, the Israel Museum made outstandingly generous loans to the exhibition, which was seen by over a quarter of a million visitors. It is a great pleasure to be able to reciprocate that generosity and to celebrate the Israel Museum's 50th Anniversary by lending this great sculpture to Jerusalem."

Like his predecessors, Emperor Hadrian was immortalized in bronze and marble statues. These statues, which were sent throughout Rome’s provinces as a demonstration of Rome’s imperial power, possessed political as well as cultic significance, and some were venerated as the embodiment of the divine Caesar.

These three images are seemingly alike, yet each possesses a unique set of characteristics which highlight the multifaceted and contradictory character of Hadrian, known not only as an astute general and politician, but also as a benevolent ruler who was well-versed in disciplines such as architecture, geometry, literature, poetry, and philosophy. The display of the three portraits also stimulates a discussion of two diametrically opposed views of Hadrian’s rule: the accepted view of Hadrian as a scholarly peacemaker and protector who built the iconic wall across northern Britain, and the contrary perception in his own time of Hadrian as "the bone grinder," the destroyer of Judea.

Hadrian: An Emperor Cast in Bronze is on display through June 30, 2016. The exhibition is curated by David Mevorach, Senior Curator of Hellenistic, Roman, and Byzantine Archaeology, and Rachel Caine-Kreinin, Associate Curator, together with Thorsten Opper, Senior Curator, Department of Greece and Rome, The British Museum. 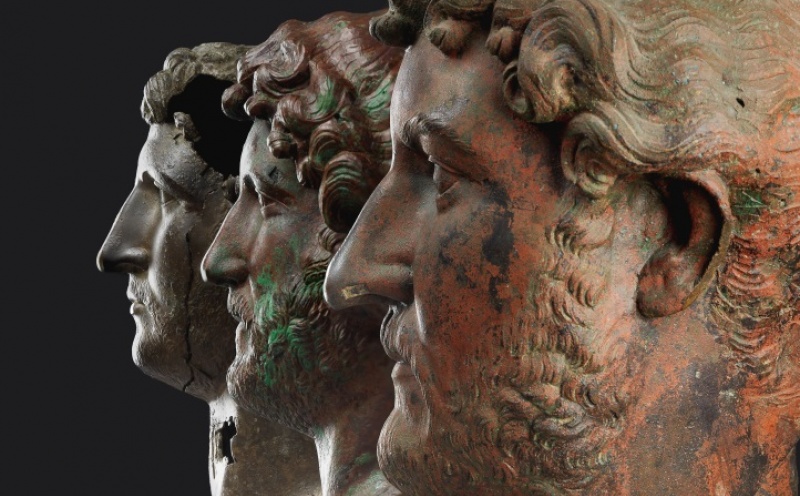