Opening September 2018, Inaugural Exhibition with the Estate Highlights an Understudied Period in Davis’s Influential Career as a Pioneer of American Modernism

Paul Kasmin Gallery is pleased to announce worldwide representation of the estate of Stuart Davis (1892–1964), one of the preeminent figures of the early American Modern movement. Known for his boldly colorful abstract works that fuse jazz references with New York City landscapes and daily objects, Davis paved the way for modernism in America and his impact endures today. In collaboration with Earl Davis, the artist’s son, an exhibition of Davis’ rarely seen black-and-white paintings and works on paper is scheduled for fall 2018 in the gallery’s 293 Tenth Avenue space. Paul Kasmin Gallery is dedicated to cultivating a program that brings modern and contemporary artists into dialogue, as well as advocating for the legacy of estates of key historic figures, which currently include Constantin Brancusi, William N. Copley, Max Ernst, Simon Hantaï, Jane Freilicher, and Robert Motherwell, among others.

Born in Philadelphia in 1892, Davis was encouraged at an early age by his artist father to pursue painting and went on to study in Manhattan under Robert Henri. Henri, the leading figure of the Ashcan School and one of the most influential instructors of visual art at that time, championed subject matter that laid bare the uncompromising and gritty reality of urban life in New York City at the turn of the century. The American realist roots that Davis developed during this period were stylistically redirected by his discovery of European Modernism at the 1913 Armory Show in New York (where Davis was one of the youngest artists included). Bowled over by the expressive colors and abstract forms radically proposed by Gauguin, Van Gogh, and Matisse, Davis found a new way to articulate his drive to express what he called “human values through forms.”

Pioneering in its commitment to both realism’s sense of social values and abstraction’s instinctive embodiment of color, memory, feeling, and ideas, Davis’ art achieved a formal breakthrough that portrayed, with resounding originality, that which Barbara Haskell, curator of his recent 2016 exhibition In Full Swing at the Whitney Museum of American Art, termed the “fragmented, cacophonous experience of modernity.”

The recognizable forms that Davis pushed to vibrant abstraction are rooted in the commonplace objects of daily life: an egg beater, a matchbox, a ladder, a barbershop pole, a lobster pot. Many make insistent references to jazz—the artist’s other most significant passion—in the form of clarinets and musical notes. The use of text, crucially divorced from narrative and context, playfully engages in the language of advertising and shaped the advent of Pop Art. Davis’ influence in the development of American Modernism, along with his work’s enduring ability to instill joy and create order out of the chaos, ensures his searing relevance.

Opening on September 13, 2018, Paul Kasmin Gallery’s first exhibition with the estate entitled “Lines Thicken: Stuart Davis in Black & White” will spotlight Davis’ transition from his use of vivacious color to executing compositions in black and white. Eliminating color was a bold move for an artist whose work was distinguished by its vibrant palette, and reflects the restlessness of an eternal maverick. These compositions are the apotheosis of his theories: relying upon nothing more than form and shape, they confirm the objective world and stand in strident opposition to the subjective nature of Abstract Expressionism. As it was for his admirer Donald Judd, it was crucial for Davis that something “known” be central to the making process. This position would be adopted by some of the most important artists to follow and is made clear in an enfilade of objects such as Judd’s stacks or Jasper Johns’ flags, targets and numbers. In his black-and-white compositions, Davis made significant strides towards creating what he described as a “Universal Style.”

A special publication, containing previously unseen archival material that span the artist’s life and career, compiled and edited by Earl Davis, will be published on the occasion of the exhibition. 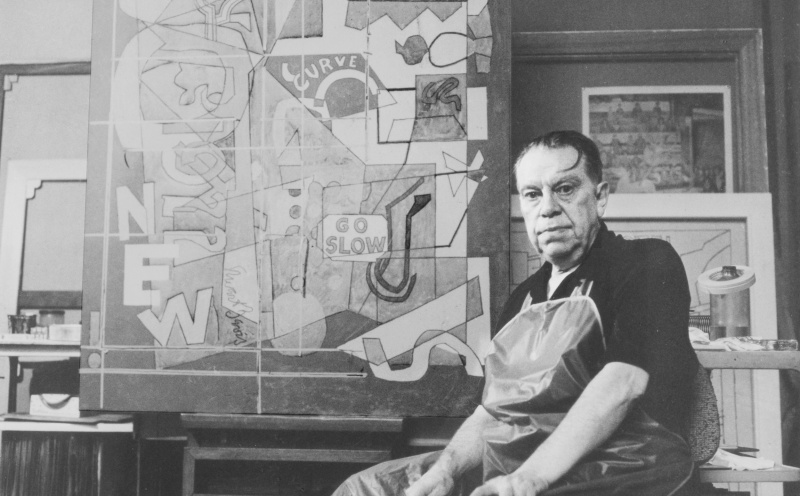