“While centuries old, Chongqing is now experiencing rapid growth and regeneration that demands thoughtful solutions to increased density and mega-scale projects. Guided by the sheer scale and complexity of the site, our design brings people in and through the site at different levels, whether by foot, car, subway, or ferry, to reconnect the city to its most historic site, Chaotianmen Square.” — Moshe Safdie

With its latest project in China, Raffles City Chongqing, Safdie Architects has transformed the city’s historic Chaotianmen district with a vibrant and three-dimensionally integrated mixed-use development that has energized a previously underutilized 92,000 sq. m. site. The Crystal, a 300m-long horizontal skyscraper that spans across four towers, recently opened in its first phase, unveiling a landscaped public observatory with a glass-bottom, cantilevered, open-air viewing deck. Once completed, the Crystal will house over 10,000 sq. m. of amenities, including multiple dining and event spaces, a hotel lobby, and a members-only clubhouse with an infinity pool. Additional programming, including the hotel, was opened to the public in August, continuing the development’s phased opening which began in September 2019. Raffles City Chongqing is set to be fully operational by the end of 2020. Raffles City Chongqing is developed by CapitaLand, one of Asia’s largest real estate diversified groups. Based and listed in Singapore, CapitaLand has over 25 years of experience operating in China.

Sitting at the confluence of China’s two major rivers, the Yangtze and Jialing, Raffles City Chongqing has become a new symbol for the city, with its design recalling the site’s historic role as an imperial city gate and maritime trading post. The project continues the firm’s exploration of vertical neighborhoods, livable urban communities, and thoughtfully connected public spaces with the Crystal marking the next evolution in the firm’s conceptualization of the ‘SkyPark,’ first developed for Marina Bay Sands in Singapore.

Embedded within the city’s densely developed grid, Raffles City Chongqing—which combines office, residential, hotel, serviced apartments, retail, and recreational facilities—has sparked revitalization around its waterfront site. Located at the heart of one of the world’s fastest growing cities in an area with limited public parks, the development provides over 30,000 sq. m. of public space including outdoor and community gathering spaces. In addition to a new multi-modal transit hub, the project has significantly improved pedestrian accessibility within the district. Among these improvements, the development integrates multiple access points aligned with the city’s undulating topography, an innovative traffic diversion system, and a new public walkway that cuts through the five levels of the retail mall to provide a direct connection between the podium park and Chaotianmen Square.

“Chongqing is such an extraordinary city—in scale, population, and personality. The topography of the city creates opportunities for intimate pockets of public space at different elevations, stacked and stepped to overlook one another and the city beyond. It’s the defining characteristic of Chongqing and one that we sought to build upon with Raffles City,” said Christopher Mulvey, Safdie Architects’ Managing Principal, who relocated to China in 2011 to establish a branch office for the firm.

With a total built area of over 1.12 million sq. m., Raffles City Chongqing is one of Safdie Architects’ largest and most complex projects to date, as well as Singapore’s and CapitaLand’s single largest development in China to date. Inherently site-specific, the design for Raffles City Chongqing celebrates the city’s history and unique character while accommodating its mountainous landscape and extreme climate. As a result, Raffles City Chongqing has sparked renewed public and commercial interest in the area with its distinct offerings, which continue to propel Chongqing’s local economy including its burgeoning tourist industry.

At a height of 250m, the Crystal is a fully programmed horizontal skyscraper housing over 10,000 sq. m. of amenities that draws the public into the upper levels of the development. In May 2020, the Crystal’s observatory garden and viewing platform opened to the public with a glass-bottom, cantilevered, open-air viewing deck. The 300m-long structure features amenities that include dining, bar and event spaces, a hotel lobby, and a members-only clubhouse with a 50m-long infinity pool.

Weighing 12,000 tons and enclosed by a concertina structural frame with an integrated curtainwall comprised of 3,000 pieces of glass and 5,000 aluminum panels, the Crystal’s gardens and amenities are open to visitors year-round, despite the region’s extreme climatic range. Metal panels on the west-facing surfaces and glass on the east-facing surfaces afford guests and visitors natural light in the morning and shade from the sun in the afternoon. Throughout the day, internal temperatures are regulated with the help of a shading system that can be tuned depending on external climate conditions.

Adding a new icon to the dynamic city skyline, Raffles City Chongqing is composed of eight towers in total, with six southern towers rising to 250m and two northern towers to 350m. The design evokes the city’s rich maritime history with the north elevation of the towers curved to recall the silhouette of an armada’s sails and the crossbeam of the horizontal sky conservatory echoing the arch of the historic Chaotianmen city gate.

Five towers are dedicated for residential use, including one of the northern towers, making it the tallest residential building in China. The second 350m-tall tower houses office space up to the level of the skybridge, where it then transitions to a hotel. The remaining towers include a dedicated office tower and one mixed-use tower, with offices and serviced apartments. The north side of the towers features a “sail” screen that provides uniformity to the façade while serving as a shade for the residents, office workers and hotel guests.

To provide a sense of orientation with the surrounding city, the three main gallerias of the mall align with and are a conceptual continuation of the principal north-south streets of the city. Set between the towers, the gallerias create logical interior ‘streets’ that run through the retail podium towards Chaotianmen Square. Each of these interior streets are generously endowed with natural light from continuous skylights that offer views of the towers above. Two additional gallerias run east to west and provide visitors with views towards the Jialing and Yangtze Rivers. This system of gallerias, punctuated by the nodes at their intersection, allows visitors to orient themselves within the 235,000 sq. m. mall, which is one of the city’s largest.

The Raffles City Shopping Mall opened with 95% committed occupancy and anchor tenants including leading movie theater chain CGV, online-to-offline retail store Jiwu by Suning, interactive play museum Cartoony, and Ole gourmet supermarket. The mall reported strong shopper traffic of over 900,000 people during its opening weekend in September 2019, with sustained average daily shopper traffic of about 100,000 visitors in the months after.

Safdie Architects worked closely with each of the specialty interior design firms to ensure that the overall design vision for the project—creating a sense of continuity and connection to the unique landscape and urban character of Chongqing—came through in the design and detailing of the interior public spaces.

The retail podium is topped with ‘Gateway Park,’ an expansive public park overlooking Chaotianmen Square. The new park provides the district with over 30,000 sq. m. of public spaces—equivalent to an area slightly larger than New York City’s Madison Square Park. The design of Gateway Park, which takes inspiration from the city’s hilly terrain, comprises a network of green and open spaces that also feature public art commissions, including sculptures by Chinese artists Zheng Lu and Jian Xingtao, and a series of water features, including interactive fountains and pools along the public path from the city streets to the upper plaza, overlooking the Square.

Raffles City Chongqing incorporates design elements that enhance the connectivity between the downtown Jiefangbei area and historic Chaotianmen Square. These new features, including new pedestrian accessways and public transportation facilities, bring a new sense of connectivity to the surrounding city for residents, visitors and the public.

In addition to a new transit hub that includes subway, bus and ferry terminals access, an innovative traffic diversion system was implemented and integrated directly into the existing road system to further improve site accessibility. The system connects roads from the upper city to the lower-elevation waterfront surrounding the development, navigating a 30m drop across the site.

The design also pays special attention to pedestrian accessibility throughout the site and its surrounding area. Gateway Park at the podium level is accessed directly from the district’s higher elevation streets and connects to a straight staircase, reminiscent of the terraced stairs that are characteristic of the city, to provide a pedestrian link between the upper city and Chaotianmen Square. This new public walkway cuts through the five levels of the retail mall and connects to the Square. A second exterior stair has also been designed to recall the historic stairways of old Chongqing, further enhancing the connections between Chaotianmen Plaza and the surrounding city. To further improve the area’s pedestrian infrastructure, walkways along the Jiabin and Changbin riverfront roadways were also widened from 3m to 7m.

Delivered in only eight years, from initial concept to opening day, the scale and complexity of the development required careful planning and construction ingenuity. The construction of the Crystal, for example, was an immense challenge, requiring both technical and logistical precision within a severely constrained site. The horizontal structure of the Crystal was divided into nine segments for construction. The three segments spanning between the towers were pre-assembled on the podium roof and individually lifted into place using cable jacks. The four segments above the towers and the two cantilevered sections at each end were built in-situ, including the two glass-floored observatory decks at either end of the structure. To avoid having to install 5,000 individual metal panels on the underside of the Crystal at 250m above the ground, the cladding of the underbelly was also panelized and pre-assembled on the podium roof before being hoisted into position and secured to the primary structure.

Raffles City Chongqing has been designed to address all required seismic codes. The Crystal has been designed to accommodate seismic movement with its placement on friction bearing pads anchored to the four supporting towers. Movement is controlled by a system of large-scale hydraulic dampers and monitored by electronic sensors. The two link bridges that connect to the two tallest towers are cantilevered from the Crystal, with carefully detailed movement joints where the bridge and towers connect.

The unique site location at the confluence of the two rivers also presented major challenges during construction and beyond. Racing against the annual flood season (July–September) when the flooding often rises above the basement levels, the crews had barely 9 months to demolish the existing coastal roads which acted as a natural flood barrier during excavation. In this time, they also had to complete more than 2,700 piles and build up the permanent reinforced concrete perimeter floodwall. In August 2020, the flood management system was tested when heavy rains raised water levels of the Yangtze River to near-record highs, with flooding in the region characterized as a 100-year flood. As a result of the careful planning, design and execution, the development survived the wide-spread flooding and Raffles City Chongqing was able to remain open.

The design of the building systems at Raffles City Chongqing integrates the latest technologies that contribute greatly to the improved overall performance of the development, while responding to the unique environmental stressors of its site. Raffles City Chongqing features a rainwater management system, as well as a building management system, that monitors and controls equipment to substantially reduce energy and resource consumption, while the development’s district cooling and heating system produces an additional energy cost savings over standard systems.

Raffles City Chongqing is the largest development in western China to receive the LEED-CS (Leadership in Energy and Environmental Design - Core & Shell) pre-certification at the Gold Level by the United States Green Building Council (USGBC). 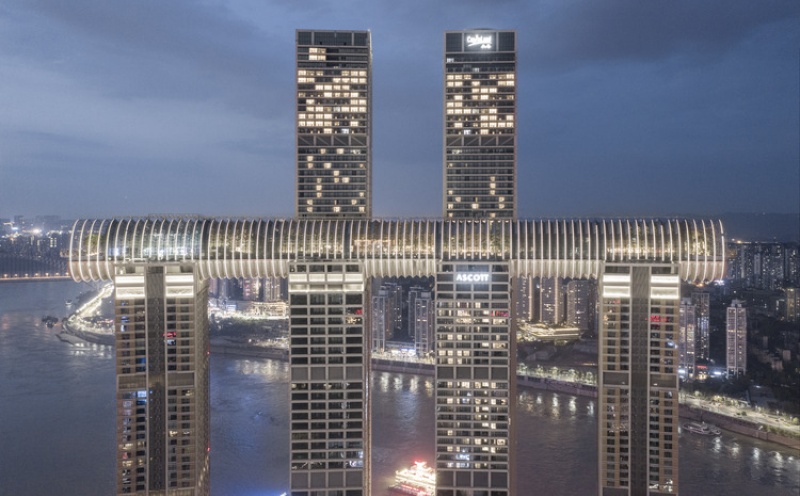